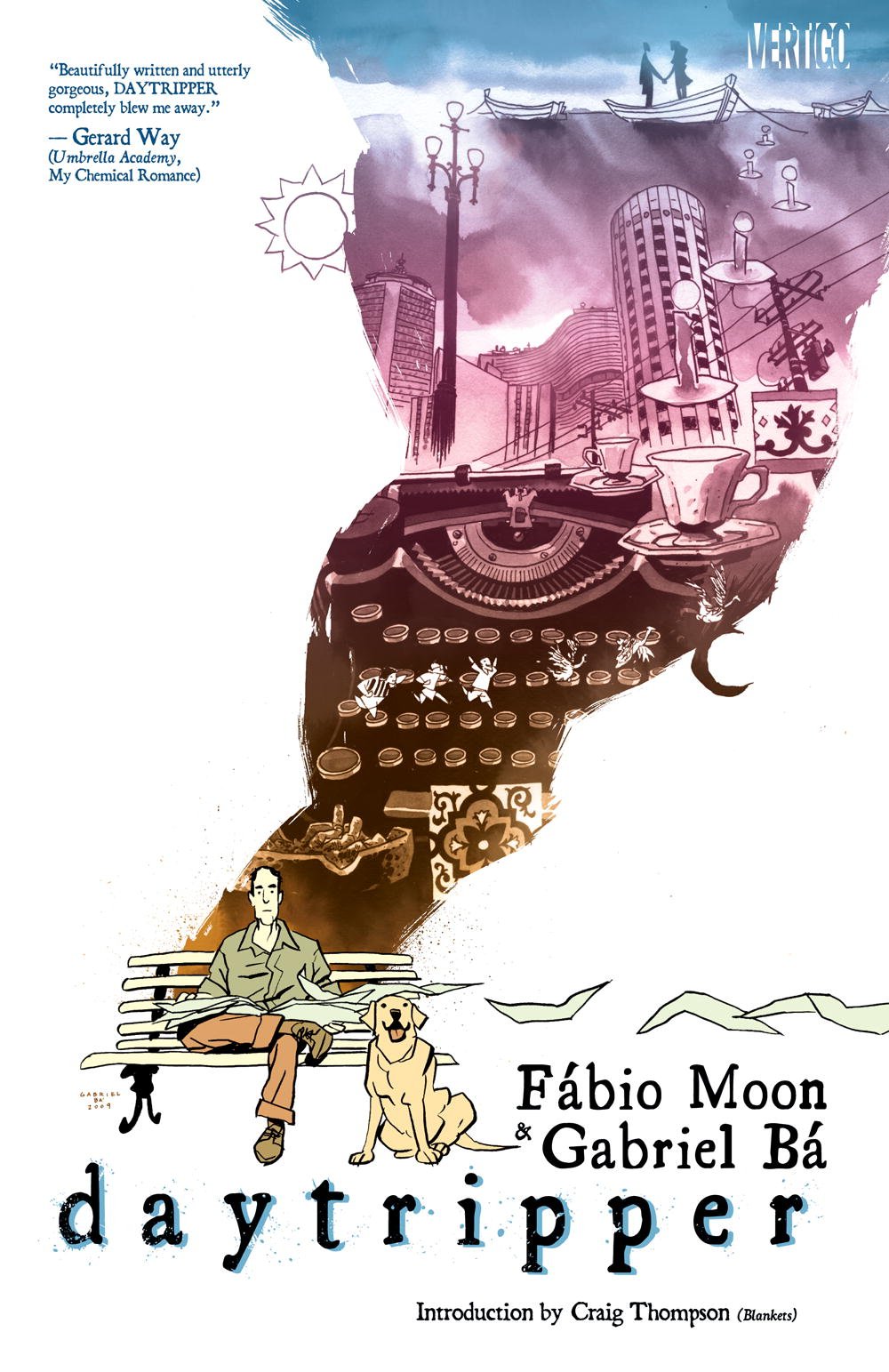 Daytripper is the story of Brás de Iliva Domingos’ life, told in a non-linear fashion via ten single day snippets. He is a writer, a father, a husband, a son. A friend and a lover too. Brás’ life could be considered ordinary, and part of the narrative drive is one of encouragement to reach for the extraordinary; to make something of your life rather than settle for what you have. There is also an unusual aspect to the story in that Brás dies at the end of every chapter, but is alive once more when the next chapter begins with no explanation as to why.

I really enjoyed the book. A Hauntingly Beautiful tale that is appreciated more once you have had your own Early Life Crisis and decided if you are living your life to the fullest.

It had mixed reviews from the group, though most were positive. Kelvin had not read a Vertigo comic for some time & felt it was appropriately Mature for the Mature Readers imprint. But rather than the Horror/Sex/Violence sometimes associated with such a label, it was beneficial to be the age we are (approaching/just past 40) to be able to appreciate the self-reflective part of the story. We may have suffered our own Early Life Crises before becoming the people we are now.

The fact it was Vertigo too meant a certain quality (or lack of) to the paper stock and colours of the printing. Most of the group had bought the standard TPB, though my own copy was the Deluxe Edition so we got to compare how it looked. The colours were certainly more vivid in that book. Dan felt more could have been done with the colour to emphasise the mood of the story. There were definitely changes in pallette but not to the extreme of, say, Southern Bastards which Dan described as “Sweaty”.

I am a cold and unfeeling monster to have not enjoyed this book. Realism in comics can be hard to process unless it affects you directly, and to me this was simply a fascinating technical thing.

Dan was not favourable of the art at all really, expecting to see more from Gabriel Ba rather than just covers and the four pages or so he did in Chapter 9. Personally, I loved Fabio Moon’s work and felt he brought an incredible authenticity and real feel to the locations and characters in the story. You could always tell it was Brás at the different ages he is portrayed. Secondary characters like best friend Jorge, lover Olinda & wife Ana all have distinct looks too that help them feel alive on the page. Having said that, we all felt these characters were at times too secondary, the story being so much about Brás himself.

The book was great despite its flaws, and those flaws are only there because I am well read. The narrative device of Brás’ dying could be left out and it wouldn’t matter. Kate Atkinson’s Life After Life did it better.

The narrative device of having Brás die at the end of each chapter was grating to most of us. Jake thought they were superfluous, Dan felt it became like an episode of Casualty where you were just waiting to see how he would die this time. The youngest death (11, by electrocution) was particularly cheap as it was one of the most authentic parts of the story, showing large family gatherings. Jake referred us to the book Life After Life by Kate Atkinson, which used the device more sucessfully. He felt the writers got out of their depth as the book went on and into the later parts of Brás’ life.

An extremely well wrought piece. Slick artwork and an incredible authenticity of place. I was searching for an explanation for the deaths. Was it connected to his job as an obituary writer? Was he always dead since he was a ‘little miracle’ for surviving his difficult birth?

Since reading the book I have listened to an interview with Gabriel & Fabio where they say the concept came from living a block away from a neighbourhood where gunshots could often be heard, and the feeling of just how easily their lives could be ended by a stray bullet. We all die in one way or another, so they decided their character would continue to die each issue. We all felt the best chapter was the one in which Brás did not appear at all, focussing instead on wife Ana and son Miguel. It pulled hard on the heartstrings to see the family’s reaction to his death.

The best thing about this club is when your friends enjoy your pick. I wasn’t sure if this would be too long at 220 pages, but Jake read it in a day. I would recommend it to anyone interested in reading beyond the fantastical stories that tend to fill the pages of comics in the American market.