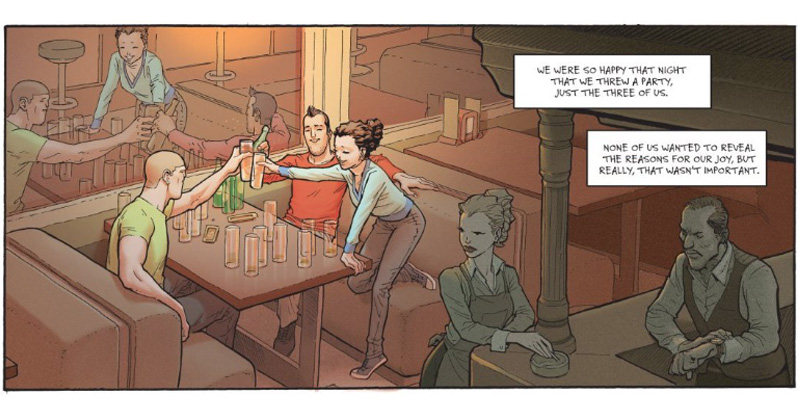 My relationship with digital comics has soured of late. In early 2013 I bought my first iPad and, after my LCS chastised me for not collecting my pull-list every week, I embraced digital completely. I enjoyed the instant hit, the promotions, the access to vintage back-catalogue with Marvel Unlimited. But then I began to find it was just too much screen. Like many of us I spend all day staring at a monitor and our phones are constantly in our hands, so I felt the draw back to paper comics, and mainly TPBs as well. When I was recommended the book we are reviewing this month back in 2017, the fact it was digital-only made me hesitate.

The publisher Europe Comics takes books popular in the Franco-Belgian market and translates them to attract an English language audience. They strive to show off the variety in European comics, both the titles themselves and the creators working on them, and to drive them into the market where superheroes are no longer the be-all and end-all. There is content for everyone, assuming of course you like digital comics. And yes, some of the books have found print publishers off the back of the extra exposure and that’s what I was holding off for with Ken Games. At the time of writing this still hasn’t happened, but the revival of Augie De Blieck Jr.’s comics podcast Pipeline brought the title back to mind and I thought it was enough waiting!

So: Ken Games. The name was peculiar enough, but no mention of Barbie’s platonic male friend was to be found. Instead, the in-story explanation for the title tells us the name refers to Sansukumi-ken: East Asian hand games of three gestures and its most popular form Rock, Paper, Scissors. Look, right there, the three books in the series have those subtitles as well. And, oh my, the lead characters from who’s perspective they are written have nicknames to match. This cleverness from the writer was bollocks to us.

And the negative opinions didn’t stop there, sadly. Jake was very pleased he’d managed to snag it via a digital tryout, not having to spend any pennies and Dan only read the first of the three books. For the most part they took against the subject with Jake disliking poker, Dan not a fan of boxing and neither thinking the way the story handled Luc Besson style assassins being very successful. They also didn’t care about the characters and found the sexual violence dirtying. That final point caused some debate as both Jake and Dan had read a particular scene one way and I another. On reflection I’m pretty sure we all agreed I was right, but there’s no denying the sexual content of the books, not least of which the moment we learn the reason the girl is know as Scissors. 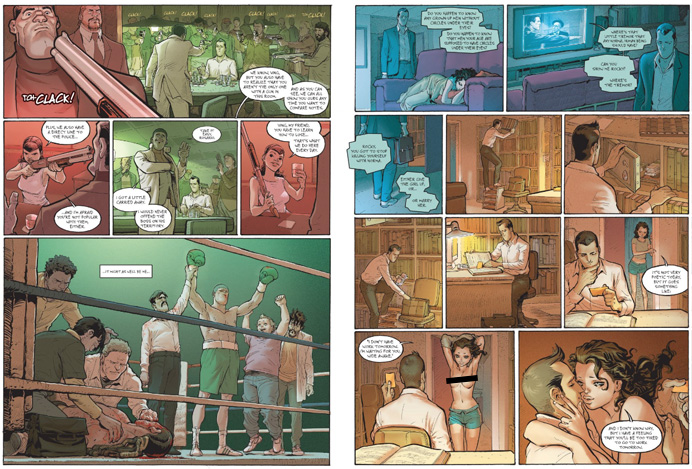 I was right to have tried waiting for a physical edition as reading what would be oversized artwork in the European market on an iPad4 was a struggle. Toledano packs a lot of panels into the pages and has fun with variations of panel shapes to match the story. Chess sequences have the rigid square panelling of the board and boxing sequences are choppy, breaking the page bleed to match thrown punches.

Toledano’s characters are quite stylised with Dan noting a bit of Frank Quitely and a bit of Tony Moore. I quite liked that though, and the sense of space and timing of the panel progression worked well. Strangely, a fourth zero issue put out sometime later uses a much different art style, focussing on a secondary character before the plot of these books (none of us read that).

The mood shone through in the colouring with appropriate palettes for each character and although shaded it was less like the harsh sculpting you tend to see in Big Two comics. There’s also some fun with the lettering in the fight, game and assassination sequences showing off each of the character’s skills. 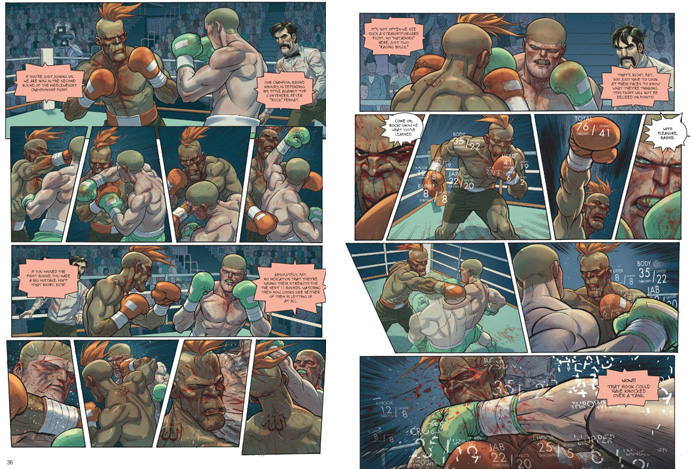 The plot threads through each of the character’s lives as the story progresses and is pretty brutal to the leads and supporting cast as well. There are standout moments in each book, particularly the conclusion to part two but I enjoyed the third part least; it all came apart somewhat in the conclusion.

I felt overall it was a solid read and pretty easy on the eyes. I’ve been a bit down in this writeup, but really if you come across this series in a digital sale or as part of a subscription give it a go, especially if you like boxing, poker or the afore mentioned Luc Besson movies!

Strange and utterly Euro, I won’t burn it, but then it is digital. We’ve read worse.
-Dan ⭐⭐

Bizarre and little bit boring. Not the Barbie fantasy I was looking for.
-Jake ⭐⭐