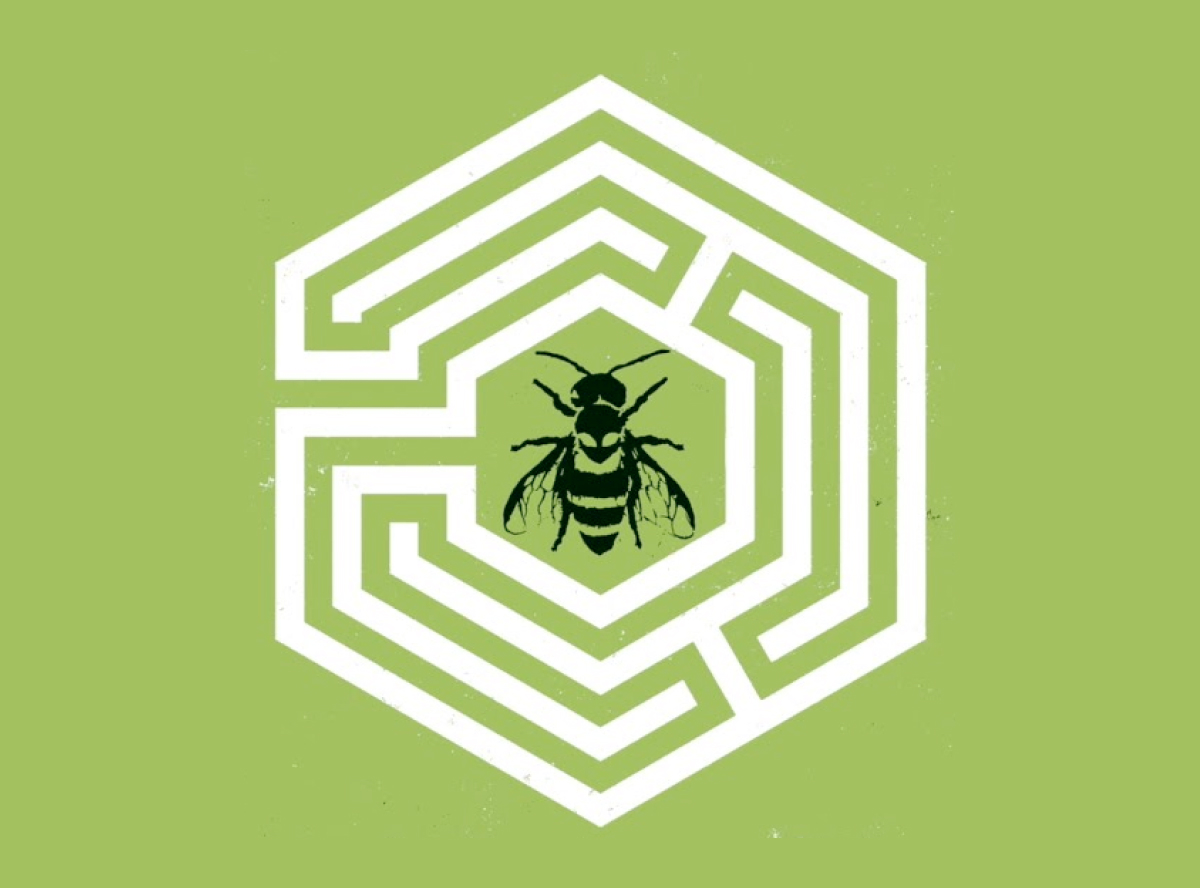 The Seeds is a landmark release for a number of reasons:

(For context, Dan suggested my coming along in the early days when we worked together with Kelvin, but geography and my inability to drive from Cardiff to anywhere at the time never mind Bradford-on-Avon got in the way. Now in the Zoom era, such boundaries are meaningless. And I now have a licence.)

The Seeds tells the story of… something? Set in an alternative near-future dystopia set in a stylised world where society is splintering along lines of those addicted to tech as the world crumbles and those who have turned their back on digital modernity, the narrative takes place against the backdrop of nature beginning to behave oddly as flora and fauna mutate. And the bees are swarming ominously.

And there are also aliens, I guess?

A recurring theme in all of our verdicts is that clarity of storytelling was not a prominent feature in this book.

Lovely art, the problem is reading it

Dan went first and noted he read the first two issues when they came out, and was surprised to see the complete graphic novel appear two years later. He initially bought the issues because of David Aja and his art, and praised the “Ryan Hughesy” cover. He kept going over the cover and appreciated its texture. He particularly loved the image of alien with seeds coming out of his eyes.

Then he started reading it and remembered why he didn’t follow up after two issues. As glorious as Aja’s monochrome, single tone “greeny stuff” was, and as wonderful as the design and layout was, he did get quite lost. It was hard to tell who was who, especially with the aliens, even the ones who you think would stand out for having their junk out.

“Strangely enough my levels of knob recognition are not up to scratch.”

Dan was particularly annoyed by the thin characterisation. The two main human characters were a female journalist woman with glasses and a cool woman in wheelchair, and such physical defining features are a poor shorthand when you don’t give either character a personality.

Ultimately, it was lovely to look at, but Dan would chop out pictures and frame them and never read it again.

Tom’s first comment was that a distressed cover is annoying as you are not going to be able to sell the book on. He appreciated that it had a dimpled cover, rather than spot varnish. This made it feel like a file, something a bit retro from on office, which fits in with the old-school journalism angle. He added that originally the story was just about the reporter but editor Karen Berger said that’s not good enough and they shoved aliens in it.

As much as he found it weirdly compulsive, Tom was banging his head against wall wanting to understand what was going on. In that sense it was like a Classic Karen Berger Vertigo book, with a lot of story and words going on in one issue. He found it unsettling and unnerving, but was not sure he liked it.

Reading it through for second time gave a better handle of the story, but he was still confused by a bunch of stuff happening. The bit on Mars didn’t seem to have much to do with the overall narrative.

Tom said he really love the artwork style and artwork itself, and wondered how much of it was photo referenced. It was realistic but not photo realistic. The use of a nine-panel grid throughout the book called back to Watchmen, but that decision to make the panel progression as clear as possible just added to the sense of it being overwhelmed by the amount of story.

Tom didn’t have a lot to say about it overall. It was hard work in a good way, but he didn’t come away with a happy feeling.

Another middling book from Berger Books.

She knows what she likes obviously, perfect example of the stuff she’s put out before, so what you would expect.

I found the first two parts interesting as I’m a sucker for both grimy sci-fi and neo-noir, so the blending of these styles was always going to be in my wheelhouse. Initially it made me think of one of my favourite 90s films, Dark City, with its combination of urban grit and mad alien shit.

However, the more I read on, the less I understood. The world-building threw in lots of interesting elements, but ultimately raised distracting questions. I gave the example of journalists working of retro computers with green letters on a black screen. This was as contrived a stylistic choice as the 1940s stylings in Kelv’s beloved Batman: The Animated Series, but it pulled me out of the narrative rather than created an intriguing mood or aesthetic.

Retro tech just doesn’t cut it in a story heavily based around modern smartphones.

I was a bit more positive about it than everyone else, despite my reservations about the overly opaque and elliptical storytelling, but much like everyone else that was down to the art.

Kelvin loved the artwork as well. It felt like Hawkeye without the colours.

He read The Seeds in two parts. Initially he picked it up and thought it would be horribly depressing, an apocalyptic not quite future where basically humans are awful, and thought “I can’t read this”. He stopped in the first issue, then came back and read the whole thing on a day off.

He got what everyone else was saying about not knowing what was going on, but did like the Bojack Horseman cameo in the bar. The dialogue in that panel was very Bojack Horseman. Unfortunately this was the most interesting character in this book, as he couldn’t care less about the cynical bespectacled journalist who doesn’t brush her teeth but has a heart of gold and uncovers the truth.

He noted that it came out in June 2020, mid-pandemic, and that there was a reason why Animal Crossing was the best-selling game of 2020. He was really looking forward to post-Covid where he didn’t have to read depressing shit until at least the Third World War.

Jake questioned what was all the seeds stuff about, as he didn’t get that at all? Which doesn’t bode well for a book called The Seeds. The story didn’t follow through on its apparent premise. There were some science people in the background doing some bee stuff, but they just disappeared. It felt like the creators had an idea, got halfway through, then decided it wasn’t interesting and wanted to do something else but they had already called it Seeds.

There was a lot of elements thrown in all the way through, like the talking bird, that didn’t serve a purpose. While some people would love the mystery of it all, for the book to work there has to be some meaning. He didn’t think the creators had worked any of it out. They just wanted to write some cool stuff in the genre, and they achieved that.

By the end, Jake felt he didn’t know anything at all about what had happened, of if any of the characters had achieved anything.

There were no characters in it at all.

Despite this, he quite liked it, if you take it for what is - a pretentious book. It looked lovely. He felt kind of sad he hadn’t bought the book. It doesn’t work on the iPad.

He also loved the artwork, and would be happy to read anything by the artist, but probably won’t read anything more by the writer.

The artwork reminded him more of V For Vendetta than Watchmen, with all Aja’s art being reminiscent of David Lloyd. Sometimes it does feel like he has a photo and just ran it by a filter, but if he has drawn it by hand, then he’s a genius.

It was a thing; Jake was pleased to have read it. The narration device made it difficult to get into, with internal thoughts, but not internal dialogue.