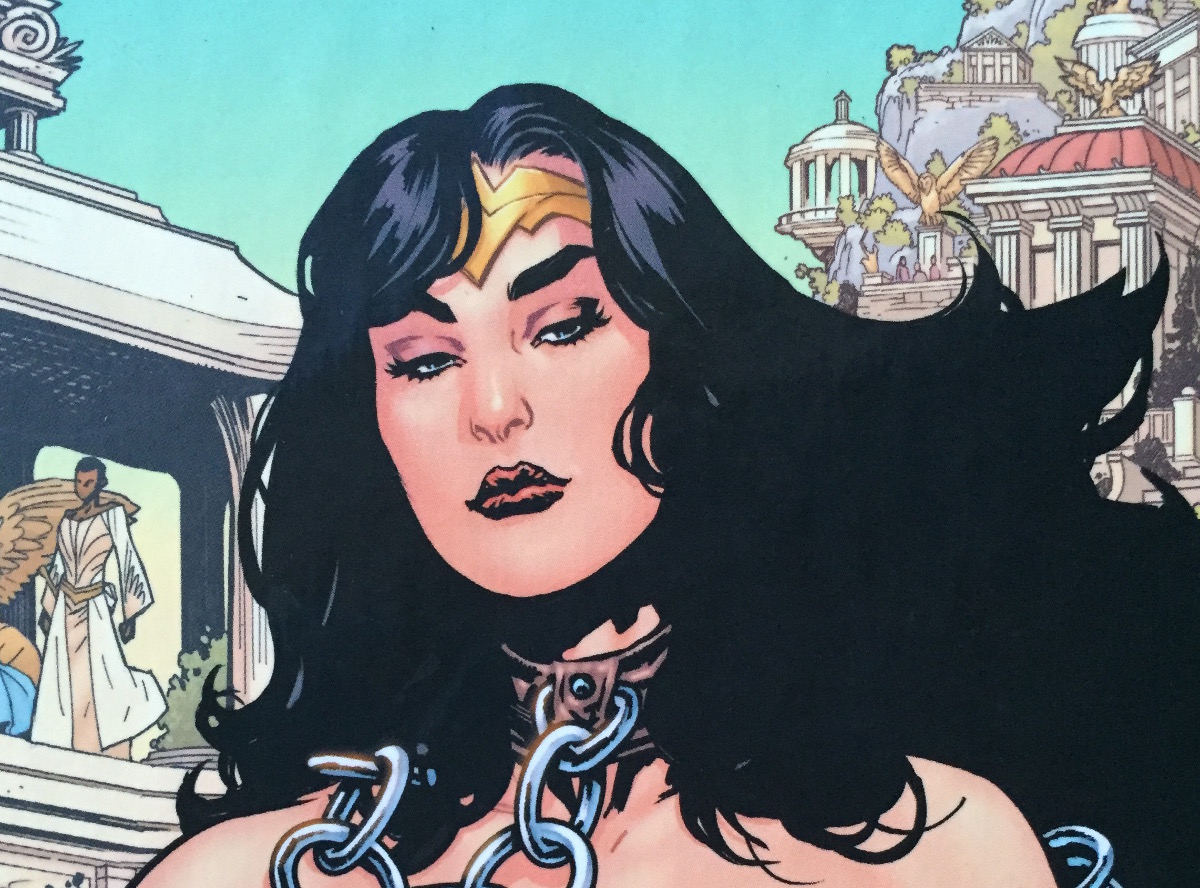 On the night of the EU Referendum we took our mind off things to review Wonder Woman Earth One, Grant Morrison’s attempt at a feminist opus. 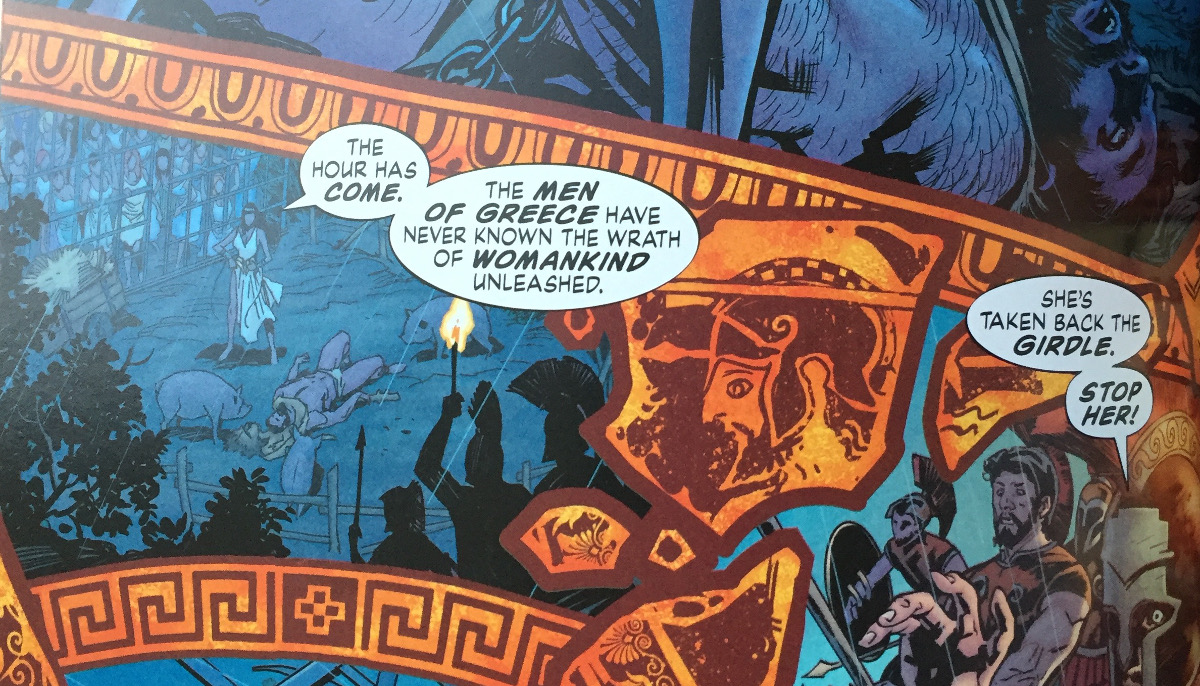 Jake started us off by commenting on how extremely light the book was, both physically and in terms of the contents itself. Although Grant Morrison goes to town on the Greek legends, he expected a deeper and darker storyline. This was super-light from the guy that did All Star Superman. I initially found it odd when Jake exclaimed that by about halfway through the book he’d “got fed up with all the women”, but then I realised he’d meant the barrage of pinup babes. “Then this man comes along and it’s all right” he said ironically. Story wise things got better once they moved on from Paradise Island, and entered what he coined the modern world. 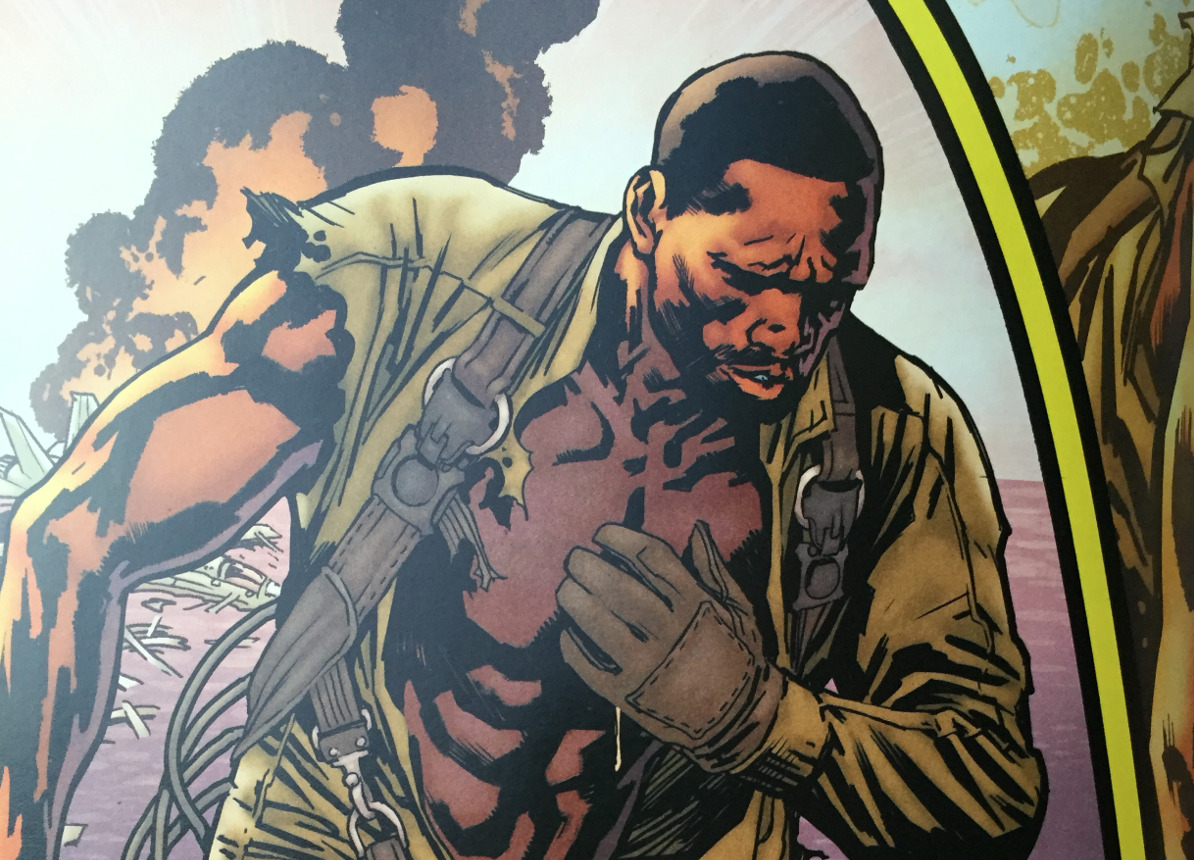 Here it turned into a bright, colourful TV show where WW’s buddies show up and Rebel Wilson is her BFF. A spark lit for Jake, but only briefly. The structure to the whole story was disappointing. There was no jeopardy: the trial that Diana faced didn’t work and the appearance of Medusa was ineffectual. Steve Trevor is turned to stone but you know he’s going to be turned back and fine. Jake wanted an adventure but didn’t think there was one. 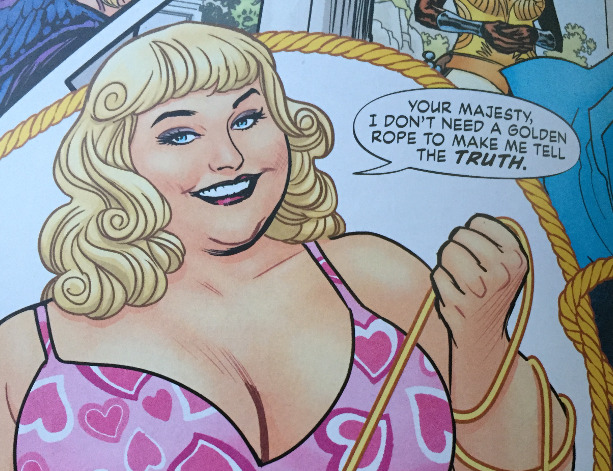 Yanick Paquette’s art worked in some places for Jake. The thick black lines sometimes employed didn’t sit well though. The Greek motiffs were good and he liked Hercules’ enslaving of the Amazons and his subsequent defeat at their hands. He felt the art was beautifully composed but lacked real impact.

This Earth One graphic novel wasn’t enough of a shake up compared to Batman Earth One which Jake enjoyed (but I hated btw).

As research Jake downloaded Wonder Woman #1 from the 40s. This also had Hercules receive a good beating and an appearance of WW’s fat friend. This original Wonder Woman was quite enjoyable for an old comic. However Grant Morrison’s Wonder Woman Earth One isn’t vintage.

Overall I enjoyed it and read it quickly. Not all good but not all bad. Light Grant Morrison.

Tom said he liked the book as a physical thing. It felt grand and the texture was nice. Stealing Dan’s font bitching role, Tom made a good point about the cover’s messy typography. You can barely see the words “Wonder Woman”. Jake however pointed out that you can’t fail to figure who it is from the image. That got Tom to say a couple of things on it: that she’s clearly chained up but her expression is almost scowling. I felt it perhaps verging on mocking. By choosing to stay in the chains when she could easily break out, she is demonstrating that she is the one empowered. A riff, I feel, on the many images of Superman depicting his obvious strength by breaking his chains. This is much subtler. “The chains are for show. She could break out them at any moment - she’s in control” Tom noted. 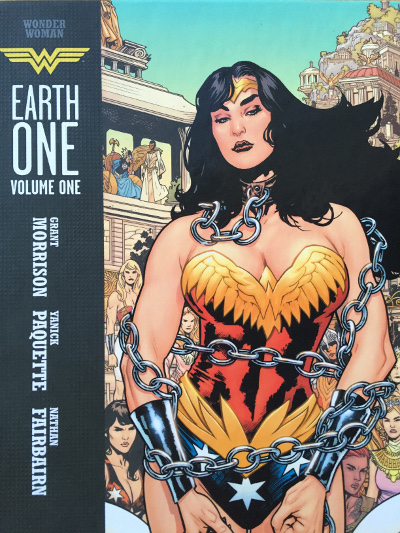 Tom was not happy that the very first pic of WW within the book is also the very last. This also jarred with me when I read it. 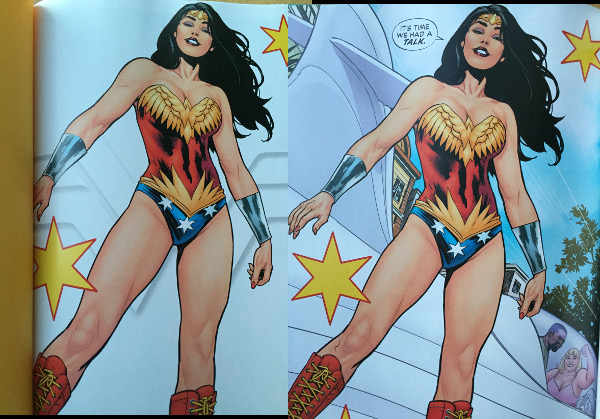 Tom then revealed something amazing that gave this book some clearer context. Dan Didio had long ago promised to Greg Rucka that he could do his dream Wonder Woman story. But then it didn’t happen. I then frantically checked the flannel panel to see if Eddie Berganza is the editor on this book. Sure enough his name is there. We spoke about the fact that Greg Rucka has been given the Wonder Woman post-Rebirth gig, but that he would only accept if Berganza was not involved. Mark Doyle (of the Batman books!) is the current Wonder Woman editor.

Otherwise Tom coined the book the Yanick Paquette Show. He had really raised his game over the years since Tom saw his stuff in the New 52 Swamp Thing. Dan likened the art at the beginning of the book to JH William III. But Tom also made the obvious comparison to Adam Hughes and his poor imitation Terry Dodson. This time Paquette is almost reaching Bryan Hitch levels of detail. Stunning work but it took a long time. It’s clear that Paquette poured his heart and soul into this, but Tom prefers Cliff Chiang or Liam Sharpe’s take on Wonder Woman. Having also been shown Nicola Scott’s literally lovely Wonder Woman by Tom, I’m inclined to think that is my favourite portrayal that I’ve seen so far.

Regarding the characters, Tom pointed out that Beth Candy had already been revamped by Rucka into a black woman. They’ve reverted back to white for the Rebel Wilson. He thought it was interesting that Steve Trevor, a black soldier, was exposed to truth serum. This was a theme that occurred in Marvel’s first black Captain America story Truth.

Although Tom enjoyed it, the story didn’t feel like a Grant Morrison tale. “Almost anyone could have written it” Jake said. He certainly has a point. Tom has said that the Wonder Woman Rebirth is already better than this as it begins a telling of Diana’s Year One.

Didn’t deliver the expectations of a Grant Morrison story.

Dan set out what was his understanding of the book. An attempt by Grant Morrison to create a true feminist version of Wonder Woman. A woman who stands on her own as a character, in mythology and in her own graphic novel. No longer seen as just 1/3 of the DC Trinity. “So why are all the creators on this book all men?!?”. I got what Dan was saying but I felt suddenly uncomfortable and self-conscious of the fact that we 4 men were sat in the pub criticising the weak feminism of the book. But Dan wanted to see a Kelly Sue DeConnick or a Fiona Staples involved, creators associated with strong feminine characters. As much as I’d agree I find it highly unlikely DC could get it sorted under Eddie Berganza. There’s your answer Dan.

He also noted that all of the quotes on the back of the book were a out Grant Morrison and not the book itself, making one wonder if the book didn’t get good reviews or if the editorial team just didn’t care.

He didn’t feel that there was commitment to this topic. A Grant Morrison tale that was frothy, weird (how is Grant Morrison not weird? - Kelv) and clouded. It felt like a Grant Morrison vanity project. Mistreated or not seriously which hurts the whole thing. Lazy or not allowed.

The art was interesting at points in a JH Williams III kind of way but didn’t like the cheesecake. For a book about strong empowerment there was a lot of T&A. Dan was not a fan of the art - very “comic booky” he said (I think he meant mainstream superhero).

The story starts out in a sci-fi lipstick lesbian utopia. Dan likes all of these things but not in Wonder Woman Earth One. It was just not very interesting. “Where’s the crazy shit?” he lamented. “Where’s the crazy sperm that messes with your head?”. I suspect that’s a different book altogether Dan.

Dan did like the interesting race swap for Steve Trevor. He smirked and grimmaced at the scene when Diana hands him the S&M collar. But he wasn’t convinced by the “mansel in distress” schtick. He wasn’t really in distress. He got a bit ill. As for Beth Candy, it was irksome for Dan that Amazons had never seen a fat woman.

To judge this as the book it aimed to be, is it a good feminist comic? Dan suspects “no”. Is it actually a good comic? “It’s all right”. According to Honey, his 12 year old girl, she found it “Boring. Why did nothing happen?”. For Dan feminism is done better in comic form in Bitch Planet and Saga. 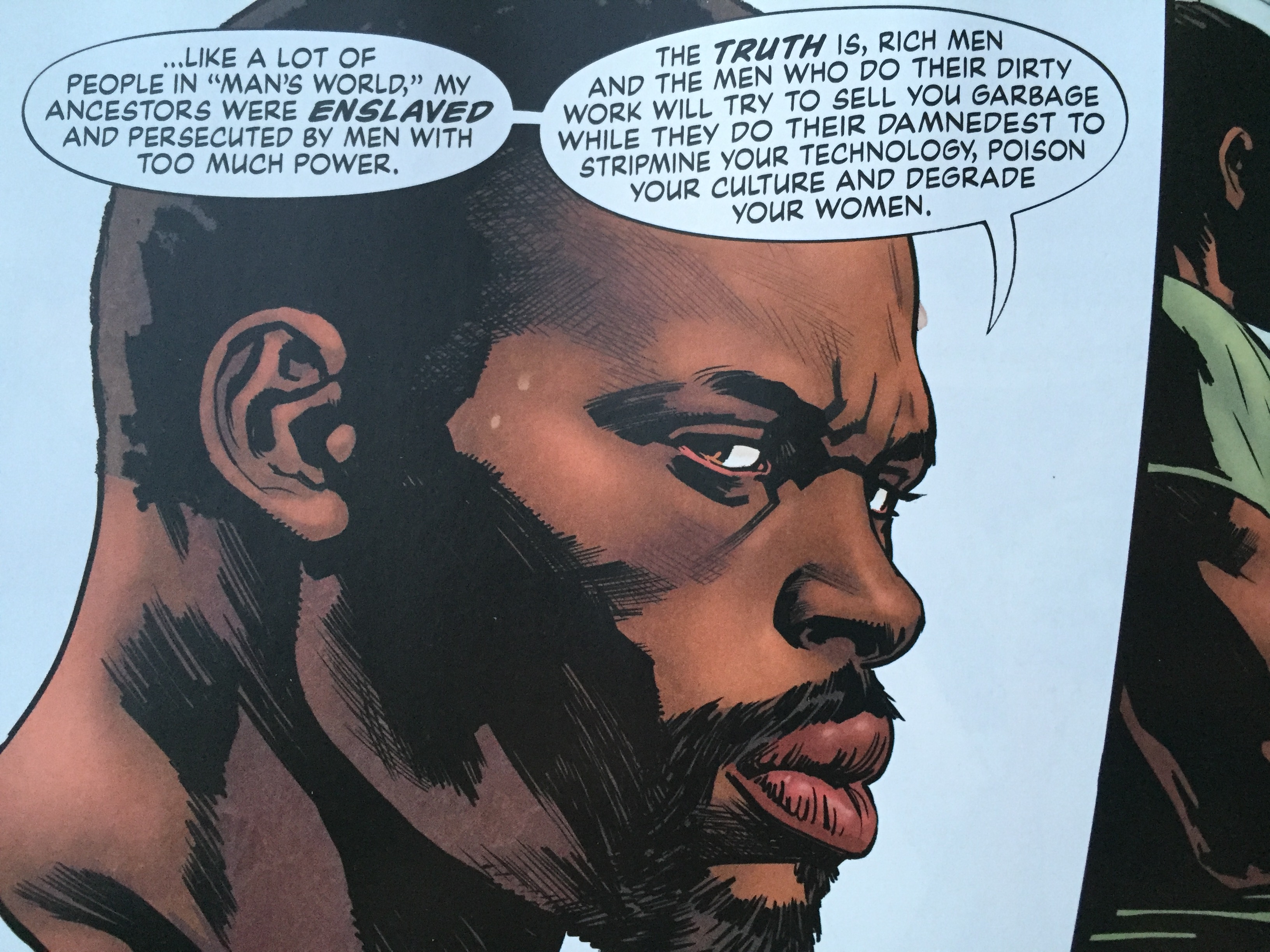 It’s rather damning I think that no one here really hated it or liked it that much. And it’s the first book that we have scored unanimously. So should you read Wonder Woman Earth One? If you want.