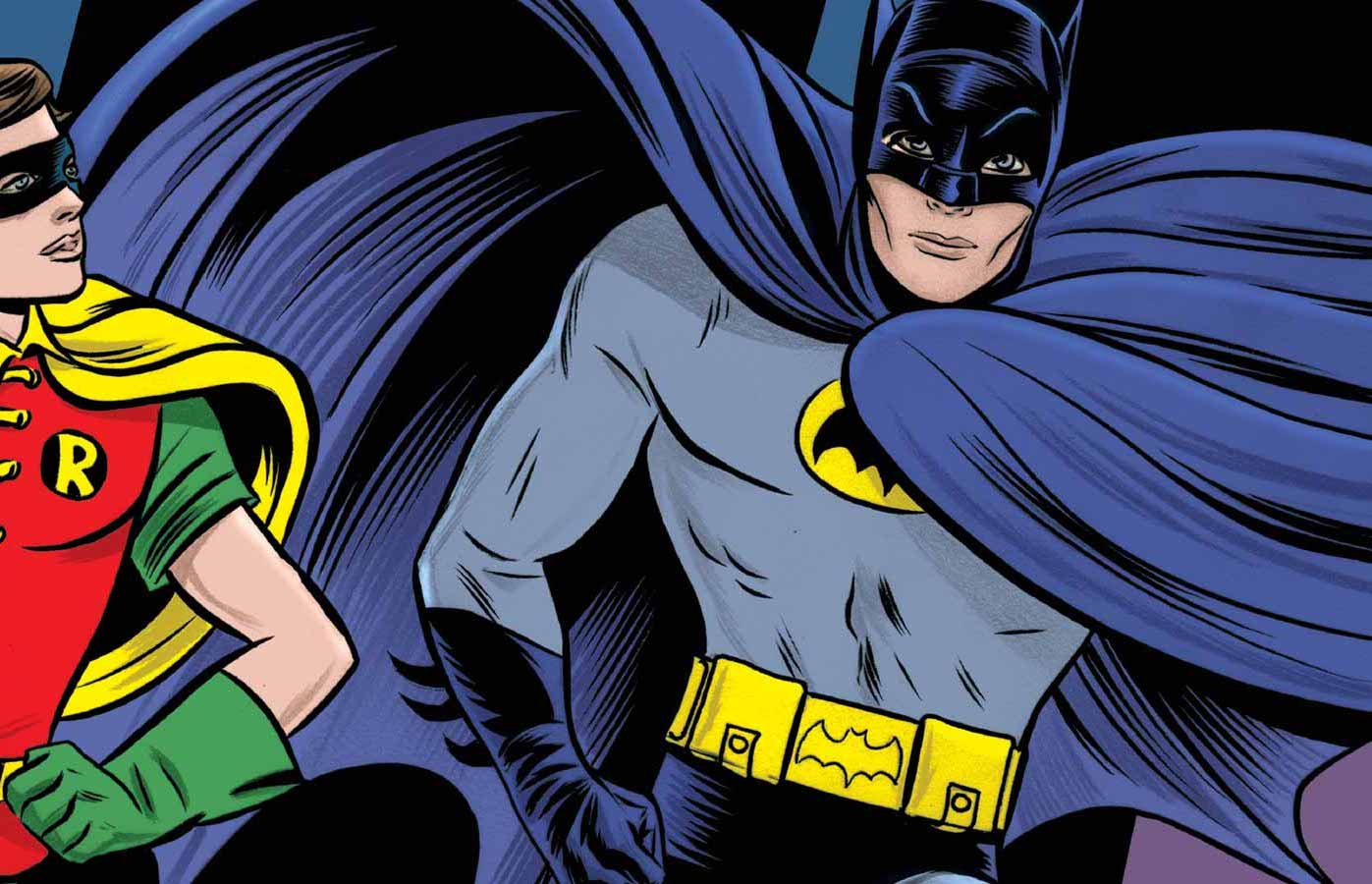 So there’s one good thing from us all being under lockdown and unable to get to the pub. I’m actually able to make these meetups remotely via the magic of Houseparty!

And as I made it to the Dalston Monsterzz get together, the gang suggested I made the next pick. I’m very happy to say that I had a book on my shelf waiting for its moment!

Apologies that the quotes below aren’t grammatically great. This writeup is comprised of my notes on people’s thoughts as they spoke. 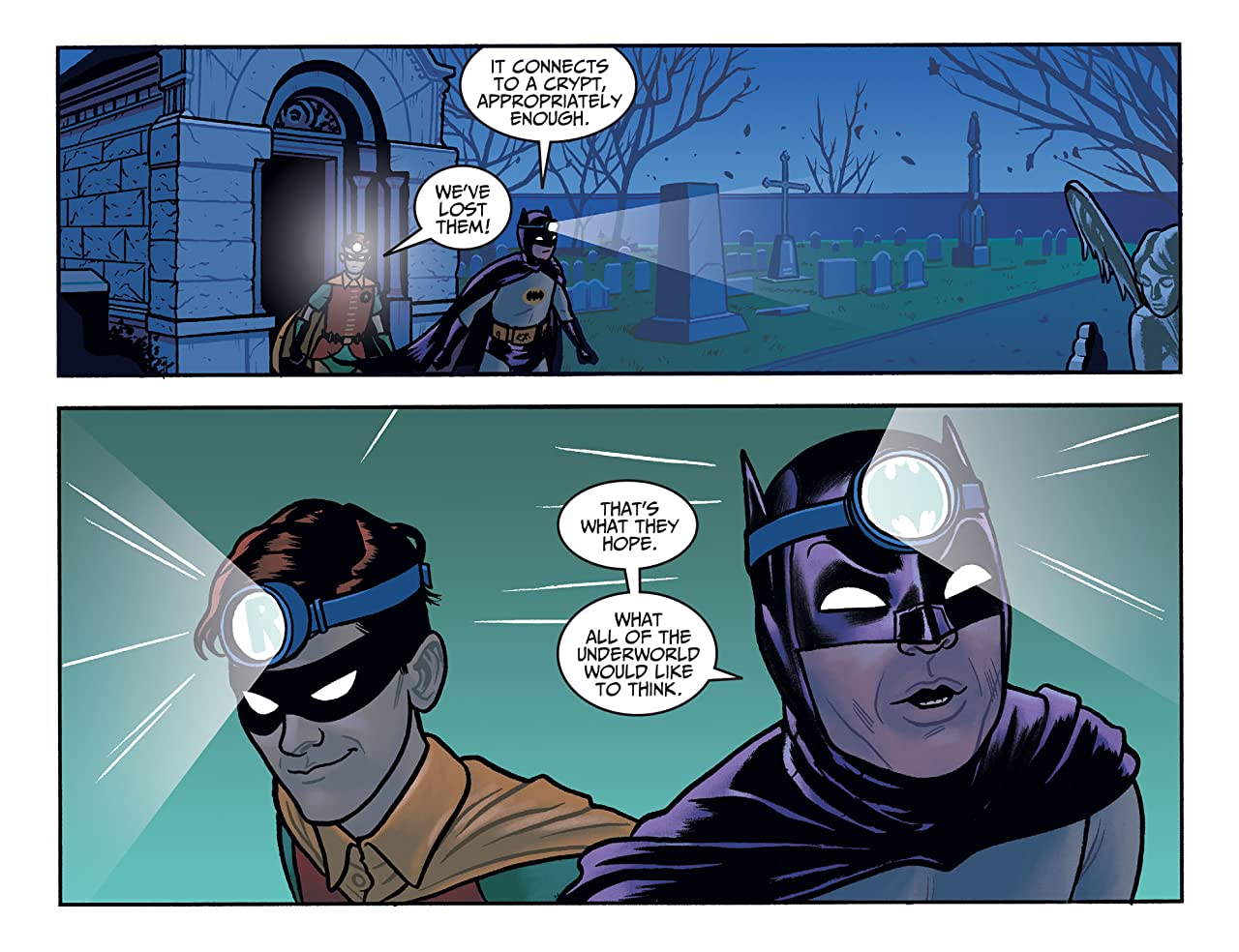 I love Batman from the 60s! I can watch film over and over again. It’s perfect in its way, wondered what the point of it would be… new ideas… but in the end it was alright…? Bazooka Joe bubble gum, with the comic inside of the wrapper! Read it, chew the gum, wrap it up and bin it. Reasonably decent approximation, dialogue spot on, look was quite nice although it varied.

Got to London bit and I kinda think I’ve got this now… 80 issues of this???

Who would carry on buying this?

Nothing wrong with it, nothing terrible, kind of a useless thing. Comfort reading novelisations of Doctor Who. Same creators doing it. But never read others doing it because it tips into fanfic.

These kind of read that way…

So difficult to finish, not hard to read… It was alright and yet not alright at the same time

(I wouldn’t have bought it!)

Pretty much similar lines to Jake - why? All the way through…

Most definitely not for me… So full of nostalgia and a weird thing to make a homage to something that already seemed pastiche. A piece of art without a particular audience. But didn’t have any trouble reading it. Blitzed through it! No thinking about it. Nothing complicated, or fear that I’d be lost in it. Apart from the London 2-parter, it’s just little episodes that go along and nothing to it.

But also wondered why you’d even buy it? GMTV went on strike, before school there was an episode of Batman on. A very particular time for me. A very specific feeling

Some of the art, and some of it is quite nice. Ty Templeton is a lot clearer and cleaner and professionally done (they’re all professionals). Liked Joe Quinones’ art. Thought it was Fraser Irving, who I like. I like London (DO YOU?!?). Yeah I like it but I just don’t want to go there…

There are moments that are lovely and fun.

I didn’t want to burn it or frustrated. Didn’t feel bored. Barely remember anything about it or anything of value or import. Aside from the best bit of art being Allred’s recreation of Cesar Romero’s moustache which freaked me out as a child. It did really take me back. 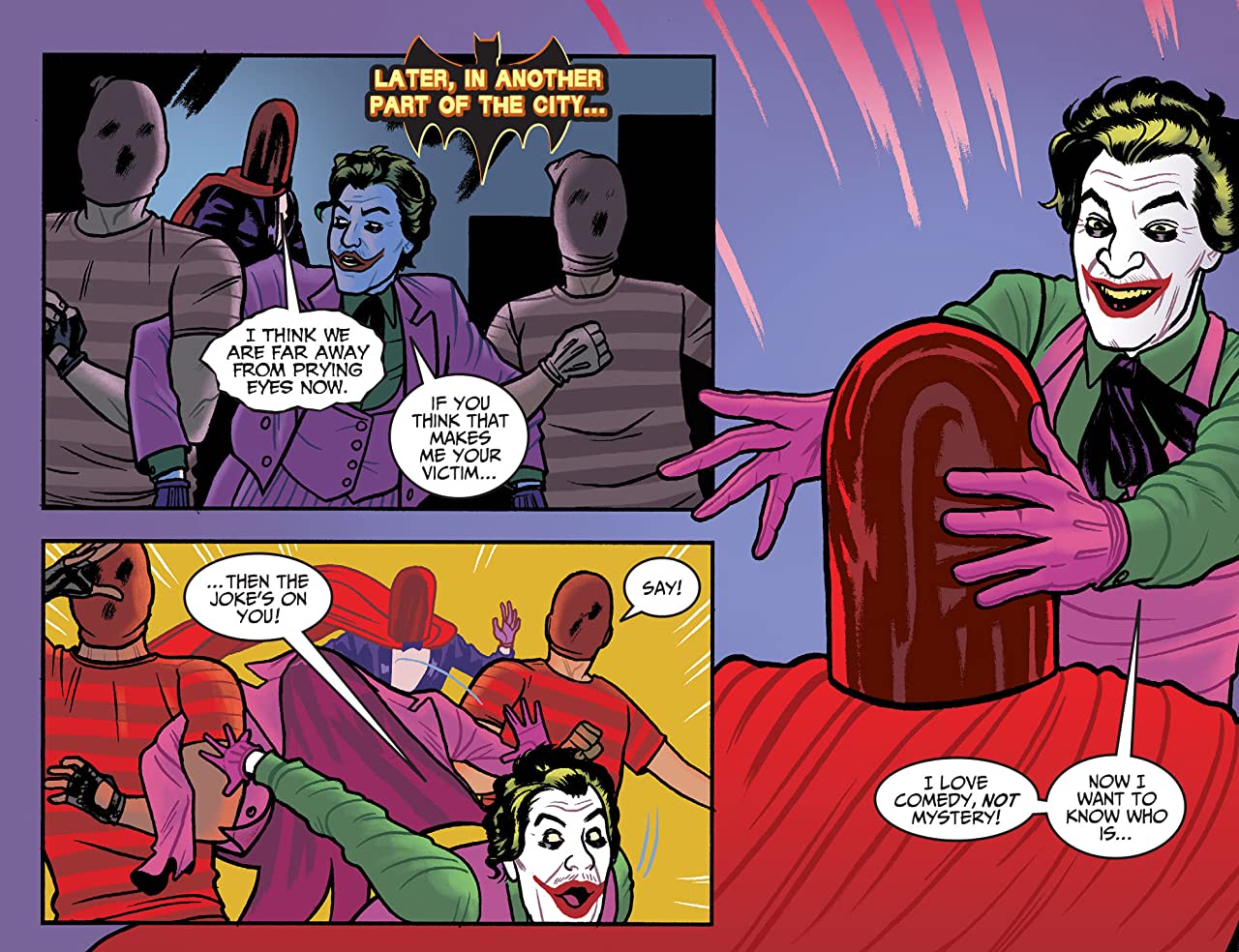 Maybe there’s an undercurrent of subversive messaging that I didn’t notice. Not to demean anything it’s hard to do comics, but it feels like this is not quite got a handle on it. Maybe it’s too challenging. It would have been too weird to make it too creepy but it would have been fascinating.

I’d also ask why people bought Batman Damned? But these are two completely different ends of the spectrum, although both follow.

Like something made of Bakelite. You tap it and it’s hollow. The Batphone!

I don’t have you Kelv for making me read it ✌️

I’m pleased to say I did enjoy it more than you two. Seemed the perfect thing for Kelv to whip off the shelf and say “This is what we’re going to read!”

When it arrived I felt I didn’t like it - the matt cover is too dull but then the pages are gloss and more vibrant. I thought Jeff Parker had done a fantastic job of capturing the voice. The commentator and the actors, that it reads so smoothly. I’ve never read much Jeff Parker before, but he’s done anything that feels vaguely out of time. Atlas for Marvel and he wrote Johnny Quest. Felt like I’d slipped on a cosy pair of slippers. It was a pleasure to read.

It was created to be digital, so every panel is half a page. There’s always a middle break, which probably helps with the reading of it. A fixed tier system that helps with the flow, so I was just whizzing through it. Kind of reminded me that this isn’t the Batman that the current readings know of today. Reminded me of 90s Batman - not the dark stuff, but the period where drawn Chuck Dixon and Graham Nolan on Detective. No crazy shadows, but a bit more daylight. 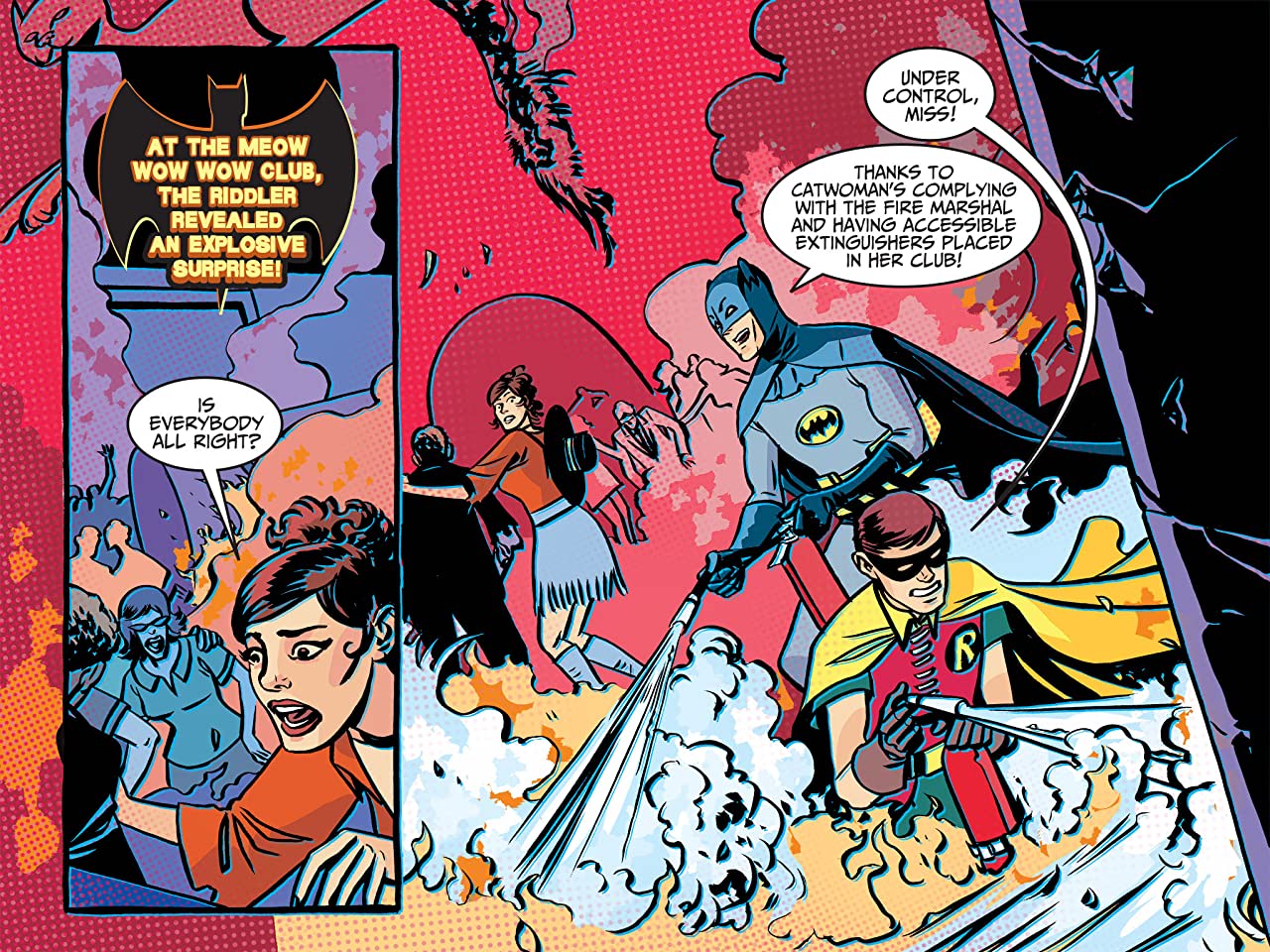 When I went to write something about it yesterday, I couldn’t remember it of course! Artwork a mixed bag… Quinones I don’t mind but it does it look like Fraser Irvings where the colours hold the shading. Can work in different styles so clearly went for this - a thick outline and shaded flesh tones.

From my point of view I felt it was a great success! Thinking of it on a monthly basis for 99 cents, in cheap bite sized chunks you’d probably be happy to buy it like that and keep going like that. Nice covers by Allred of course. Good casting! Jonathan Case was very good as well.

I don’t like the presentation and I did enjoy it a lot. I’d probably read this than modern Batman!

I very much needed a really bright, breezy easy read that was nothing more than colourful and kitsch fun. There was no real jeopardy in these stories. The voices were all accurate and lit up my imagination. The sequences were more action packed than 1966 TV budgets and special effects could ever conjure. 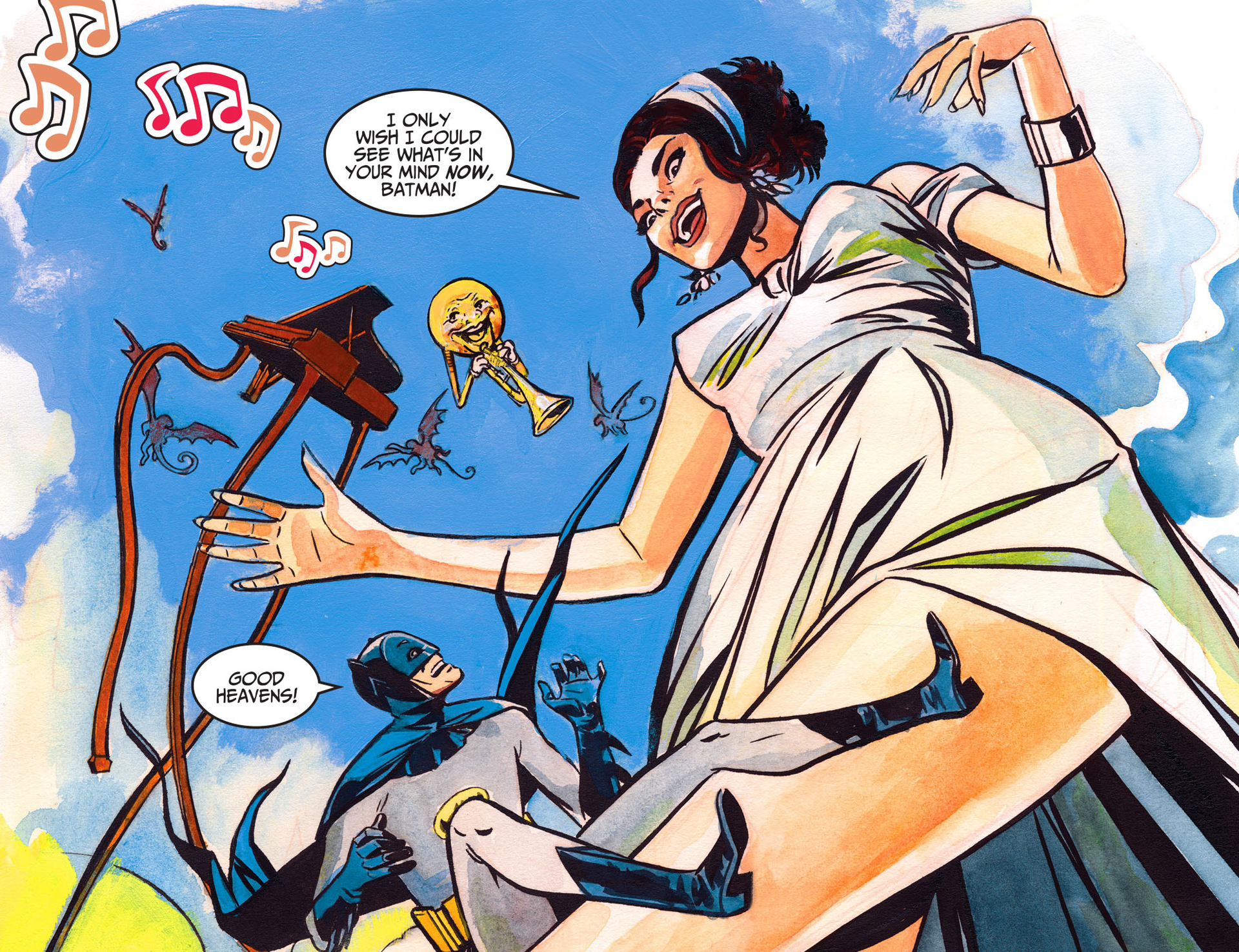 OK I agree with the others that it’s a difficult proposition, and I’d never made the investment into this title before. I only got the hardcover from the cheap bins at London’s MCM Comic Con last October! It’d been sat on my shelf for months since, until it was my turn to pick.

What Jake said about being reminded of Bazooka Joe is cool, because it perfectly captures the essence of bubble gum fun. 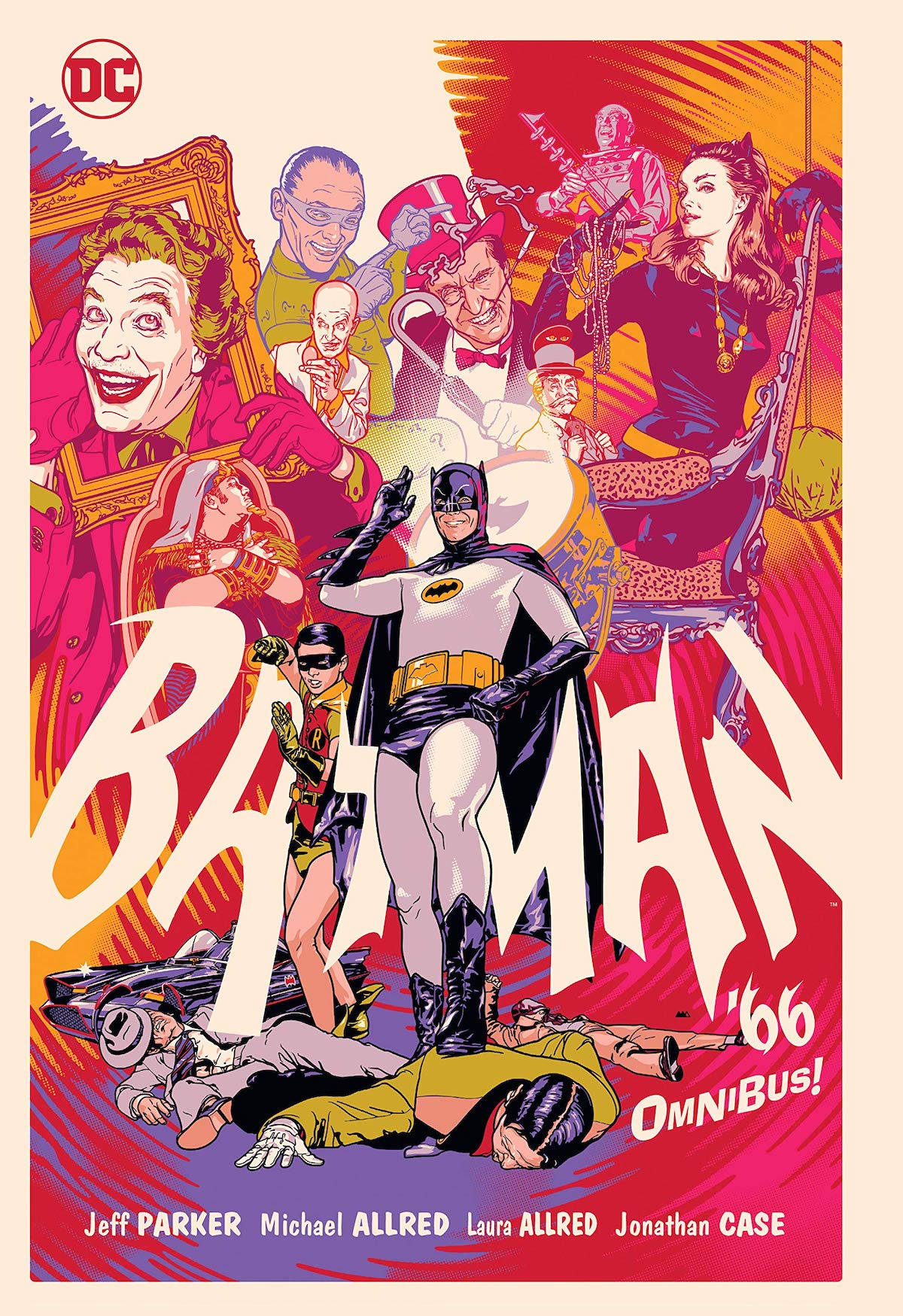