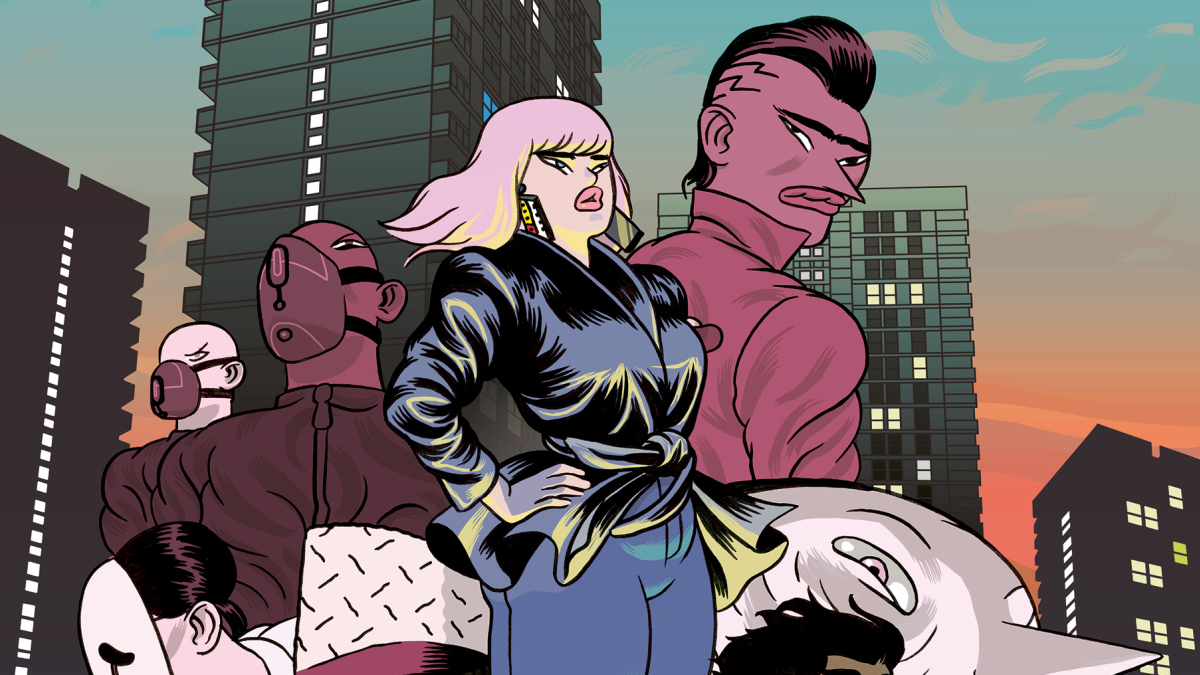 A rather unusual Comic Book Club meet up this time around, what with everyone under lockdown due to the spread of COVID-19. Instead of our regular pub-based get-together (I miss you so much cheesy chips!) we tried out a virtual meet-up via Houseparty.

Although not entirely successful due to network connections reaching breaking point we all managed to get our thoughts across. We had a good few laughs, Jake nailed his G&T, Tom dug out a beer from somewhere and Kelv made a glorious return to the fold after more than a year’s absence.

So, this one was my choice. I spotted Dalston Monsters on some random recommended list and immediately loved the strong graphical vibes I was getting from the cover. The accompanying hyperbolic blurb made it sound super cool. It came across a bit like a trendy YA novel mashed up with raw, underground punk styling. I was very much looking forward to something a bit… new.

Sadly, I don’t think that was entirely what we got. 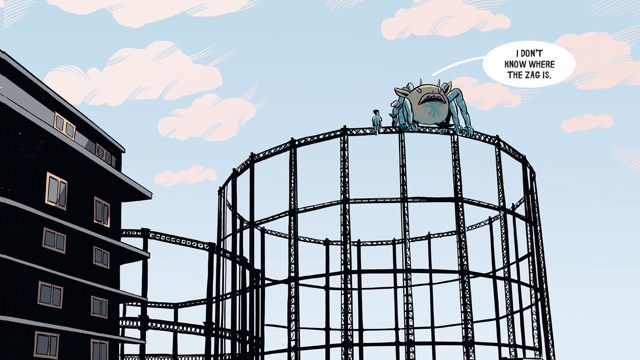 This is definitely a London-centric book. Dalston is a real place which Kelv, one of our resident Big City ‘specialists’ along with Mr Hayes, described as up-and-coming and ‘chock full of hipsters’.

The book plays up this aspect, setting out a landscape populated by influencers, trend manipulators and monied real estate barons busy buying up everything in sight. Meanwhile the youth are, as ever, bored out of their minds and have turned to petty crime, hollow socialising and increasingly outlandish gangs to pass the time.

On top of all this urban upheaval, throw in some vaguely Tim Burton-esque monsters (The candy-striped stilt legs and gaping tooth-filled maws feel almost like direct homages) strutting across the skyline as if they’ve always been there. 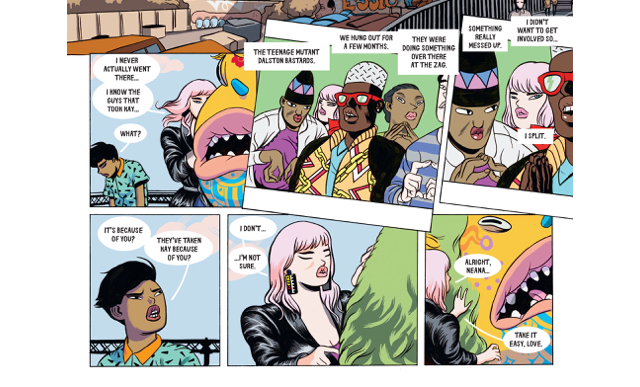 Some seem to have a direct connection with these mysterious beasts, whereas others treat them as a nuisance - much like a fox that rummages through your bin bags at night.

Some of the gangs mentioned previously have ‘tamed’ these monsters and use them to propel themselves over the rooftops of Dalston. Seeing these bandy legged beasties striding between buildings has the potential for some seriously exciting set pieces but these don’t ever seem to arrive with the impact their introduction promises.

The brick wall of disappointment

Of the 4 of us only Tom avoided the ‘brick wall of disappointment’ after making it about 10 or so pages in. At this point in the book both the art style and broad narrative had bedded in and it was clear how things were going to play out. Tom blitzed through it super-quick, put it down and then promptly forgot about it. The rest of us didn’t find it quite so simple.

Jake’s issues seemed to stem from recognising many of the archetypes set out in the book and feeling rather uncomfortable that he adhered to many of them himself. You’re so much cooler than that Jake - stop beating yourself up mate ;-)

Kelv’s initial excitement over the cover styling soon dissapated as he struggled to engage with any of the characters. None of them felt like they had any depth or meaning.

It’s kind of impossible to talk about Dalston Monsterzz without mentioning the seriously quirky art. The overall look is chunky, solid and pretty dynamic. There’s a fair amount of movement in between panels and Tom really liked the flow of the pages as they see-sawed between talking heads and weird monster-driven action.

But then there are the faces. Needle noses and puffy, pronounced mouths make every character look like they’ve just removed their face from an active wasp’s nest. 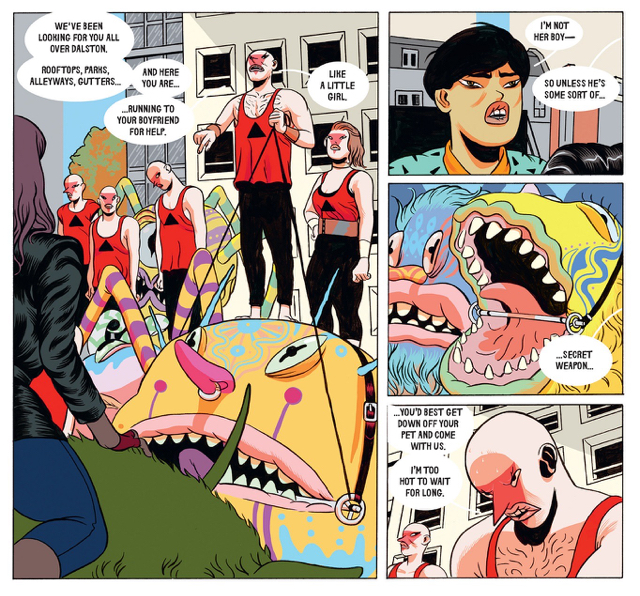 These visual tics are just so prominent that they become incredibly distracting. It’s hard to look at anything else on a page when your eyes are drawn towards each and every bizarre face present. Jake eventually came to terms with the noses, Tom got past it after some initial reticence and Kelv just couldn’t get it to click. I spent the entire book wishing the faces would go away as I found them really quite distressing.

Probably the biggest problem we all had with Dalston Monsterzz is that it looks and feels like so many other books of this ilk. We struggled to find anything that made it stand out from the pack.

“Reminiscent of a whole bunch of other stuff although I can’t think of the names right now!” - Tom

We’ve read a fair few Nobrow books in the CBC - Nobrow being the publisher - and it almost feels like Dalston Monsterzz is hewing dangerously close to some kind of ‘house’ style. From the beautiful binding, high quality printing and embossed cover to the colour palette and lettering, everything screams ‘Guardian reader favourite’. 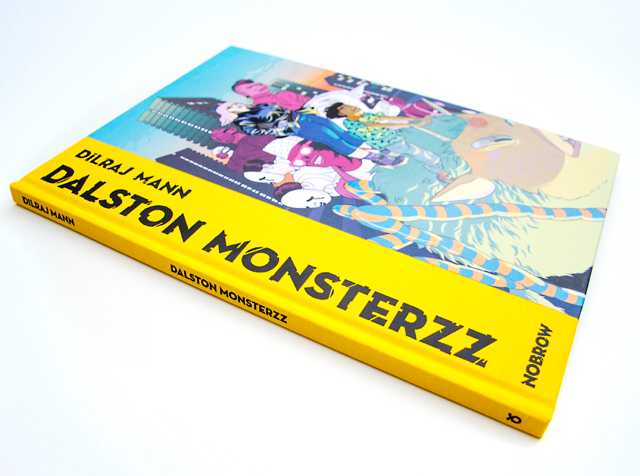 In the end, at the end

So, in the end I don’t think that we could really recommend Dalston Monsterzz. Tom definitely enjoyed it more than the rest of us, giving it 4 stars. The rest of us couldn’t summon up enough enthusiasm to give it anything more than 2.

Maybe Dalston just isn’t as cool as it thinks it is?

“Anyone want to take a stab at explaining what actually happened at the end? No?” - Dan