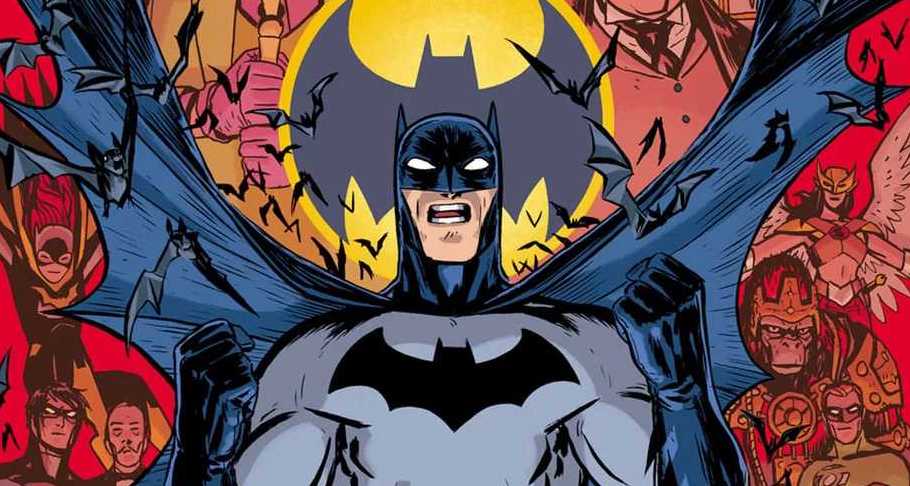 My second Batbook pick in a row! Something that I’d spotted shining on the shelves, surrounded by the darkness of a billion Metal spin offs. In this dire world we’re living in today, another lighter Batman book was very welcome.

I didn’t read Bendis’s Superman run. But it’s maybe that I just find Superman super boring. Nothing in there seemed intriguing. And ok, maybe I’m super biased too, but Bendis’s take on Batman seemed different to usual.

As I’ve pretty much unplugged myself from fandom, as I find so much of it a toxic swamp soup of fascists, bigots, misogynists and racists, I don’t keep up with what’s what. So I had no idea about this book. Neither did Dan and Jake.

I’d flicked through some when I was in the shop, and I’d also seen this wonderful interaction between Green Lantern and Bats. 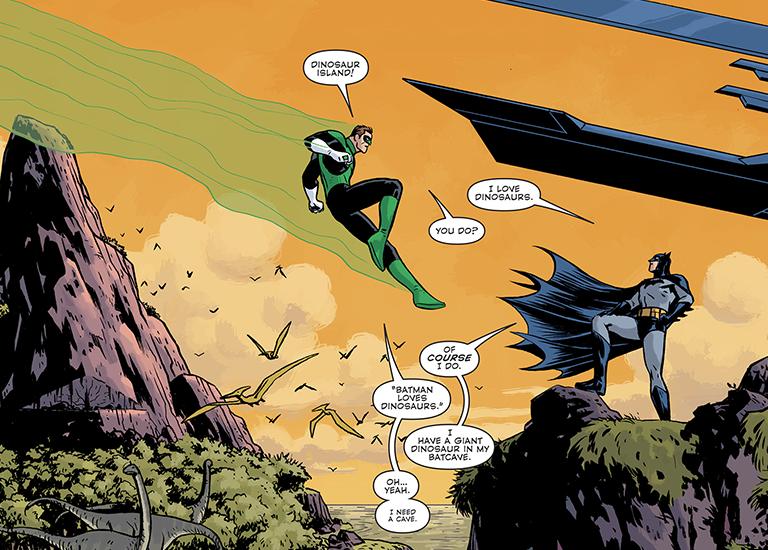 This scene alone grabbed me. It’s typical Bendis dialogue. A touch of humour that’s slightly self deprecating (with regard to everyone else around Batman that is). A clear Bendis hallmark, but for some of us we were uncertain on what Bendis’s writing style meant. Dan said he of course knew his name, everyone who reads comics does. But he had zero idea what his voice was. For me, it was the expanded narrative he utilised often in the Avengers books and Daredevil. For Tom and Jake it was Powers with Michael Avon Oeming, which I’d never read.

But it pretty much didn’t matter which Brian Michael Bendis this was, as he allowed the characters to just sing in a lighthearted story we all found joy in. This was intended as a short run that allowed Bendis to explore the DC Universe without a Crisis Inducing Summer Crossover Event.

Batman’s encounters feel more like casual introduction than any kind of dramatic incident. Like when Batman and Green Arrow bump into each other while chasing the Riddler individually. So they team up. Later Batman wakes up to Watchtower medical bay with Hal Jordan and Cyborg present. So he teams up with Green Lantern. I loved this Brave and Bold vibe. And you really feel that Bendis is giving each of them a real sense of love and respect. There’s no smug, “look at me and how clever I am at coming up with something original and groundbreaking on this character that no one else has done before”. There’s just pure love and reverence. 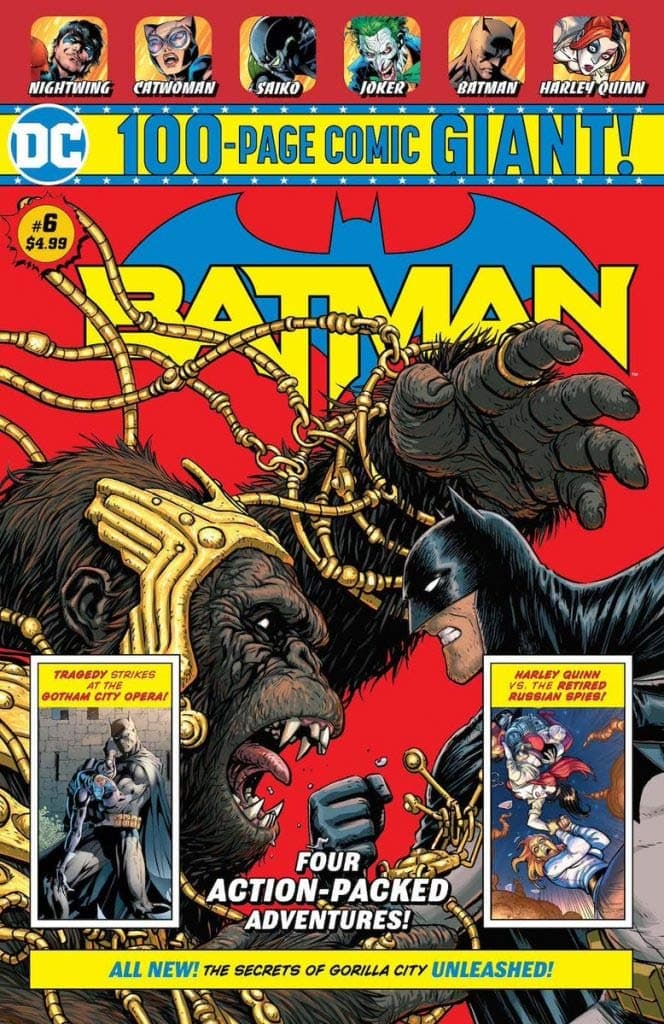 The original concept was for a small number of 100 Giant Specials, and Jake thought perhaps once collected into a single volume it lost some of the magic of reading in instalments.

The narrative isn’t entirely seamless, as we skip from one episode to the next. The story itself being bright and breezy, is maybe a touch too light as no one was blown over. But then again, that was the point. If it had been heavier, we might not have loved it as much. 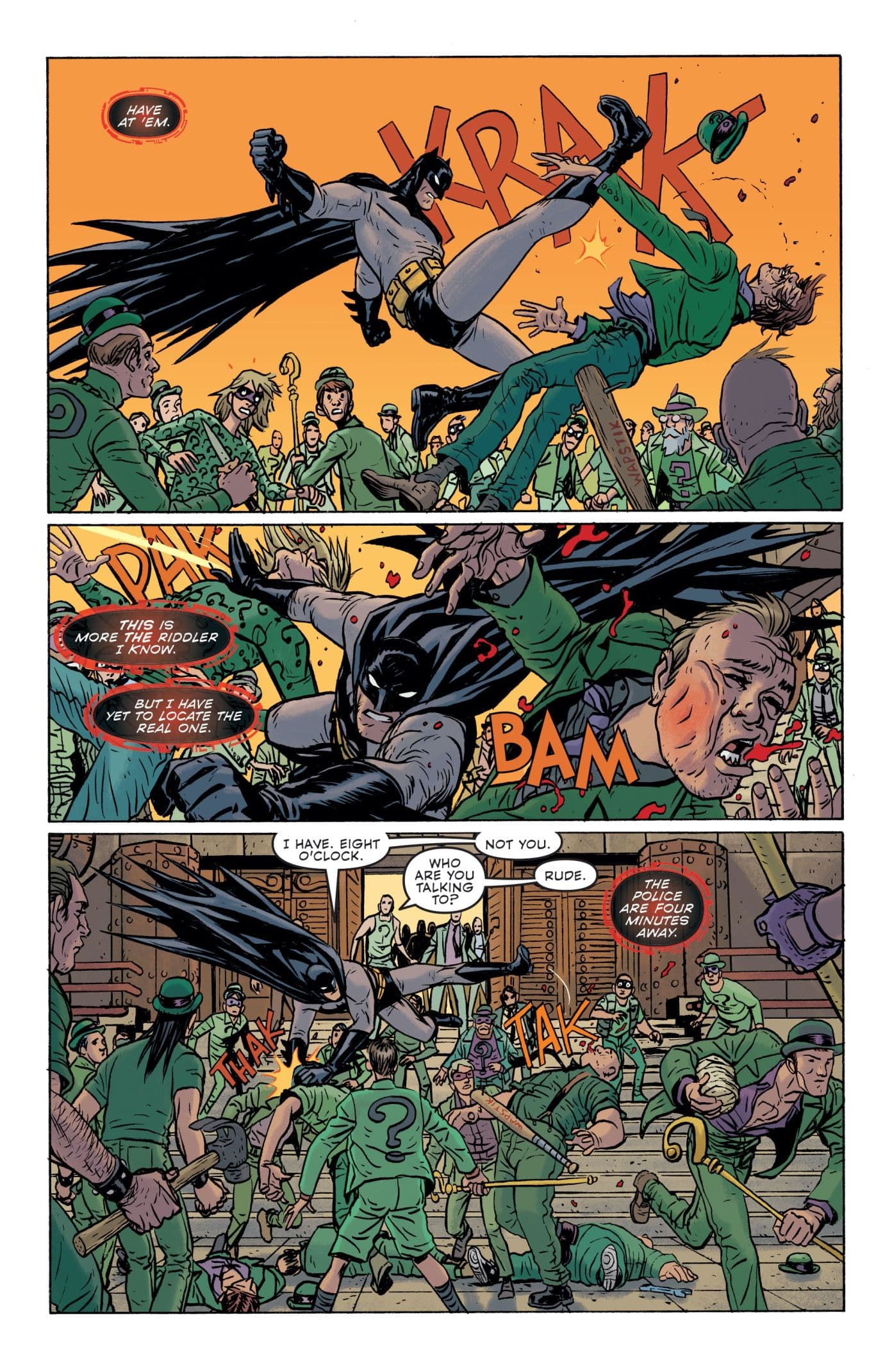 There was no death of a long-standing character of huge heft to make you feel mildly traumatised, and for some tiny little minds to threaten to murder the creators (these aren’t fans, these are maladjusted people). No ridiculous and unnecessary ret-conning. The one thing that did change, which we dubbed No More Batman, was resolved satisfactorily.

We thought about RIP Batman, and the Infinite Crisis Omega Beam “demise” of Batman then returning from being lost in time (didn’t Captain America do that too?). Those were a little drawn out. This entire book was just short and sweet.

I’m also in danger of drawing out this write up. I’ll let Dan summarise, as he does it so well and also because I was so surprised and so pleased that he liked this book:

“Best Batman thing I have read for a while. Thoroughly enjoyed it.” - Dan

…and why it wasn’t a perfect score:

“4/5 Batarangs (the Bat wings and harness being too convenient)” 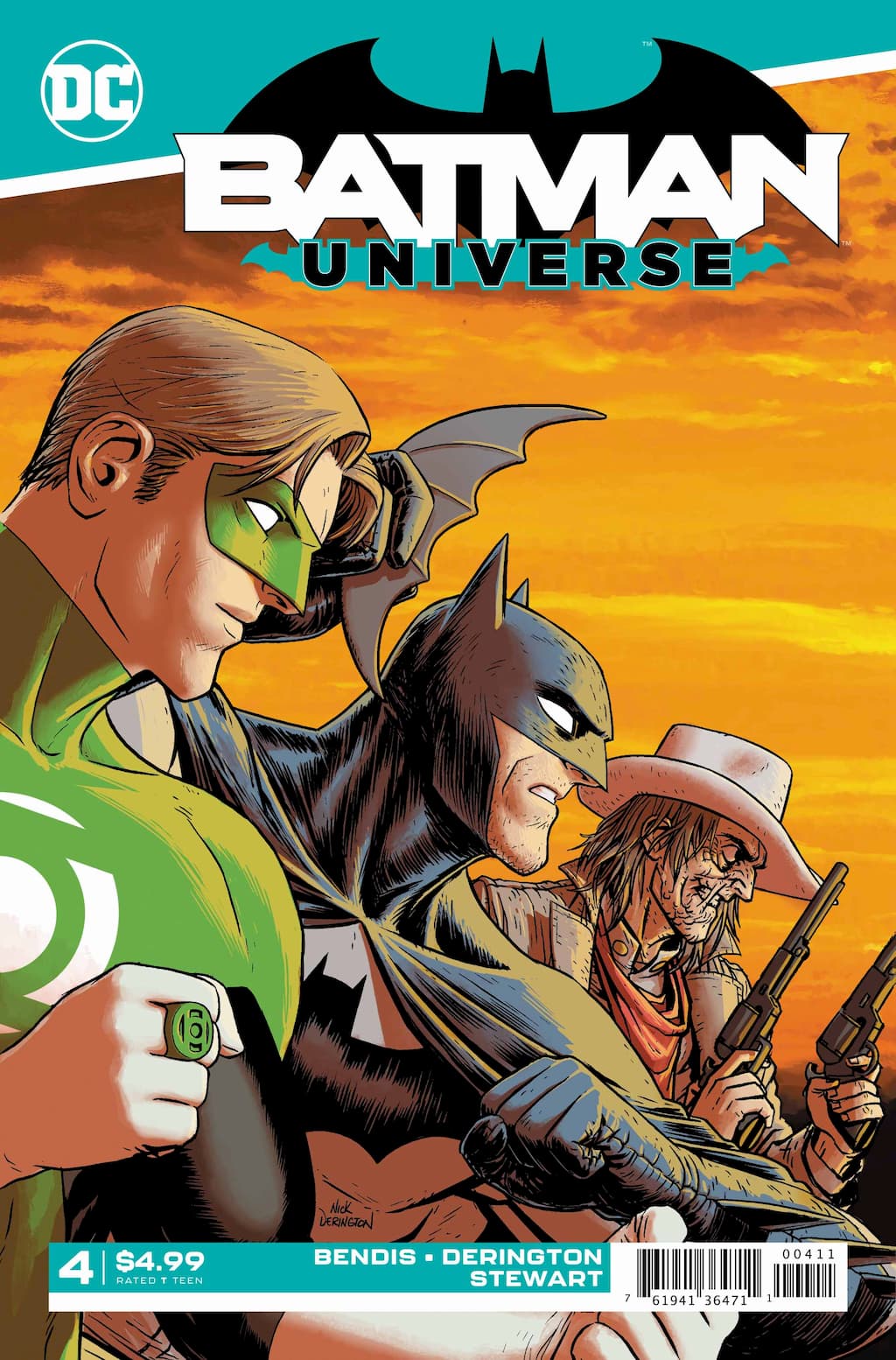 I tend just edit our notes near verbatim, as I like capturing our chat. I did a proper write-up this time, but as a nod to the “special edition” or collections of series that include the script, sketches, alternate covers and pinups I have decided to include my “behind the scenes notes”.

Whoo! Another Batman! Never heard of it. Batman’s not something Dan keeps up with. Read Last Night On Earth Snyder/Capullo. Didn’t really like their run nor Tom King’s.

Really struck: oh it’s Bendis. Of course I know that name but couldn’t put in my head what kind of writer he is. What’s his tone.

No idea what to expect tonally.

Opened it up, a genuine surprise. See from cover and reviews, thought had an idea.

I THINK I REALLY RATHER LIKED IT!

Stick Batman in a thing where he’s way out of his depth - cosmically. Man with nice toys and martial arts, nice planes and cars against gods and space aliens.

Bendis throughotu the entire thing was just respect, no character no moatter how daft or stupid not treated as not even straight just ast they are. City of apes -> pushed to the other extreme of super serious dark and miserable. This is waht they are bingo run with it.

No smugness, how clever I am

Didn’t understand half of it - not massively concerned

A thing happened and an egg, genuinely laughed a couple of times. I like the writing. the sparring bakc and ofrth between Alfred and Batman - the comms chat

Green ARrow and Lantern being in it

Jonah Hex one of faves, re-reading Lansdale from early 90s

Delighted to see him chucked in there as well

Genuinely don’t have any apart from lack of DCU and Batman knowledge might have helped with understanding of what’s going on (oh dust jackets are shit - French Folds! that’s the way forward)

Look at it now THANK GOD something else

Best Batman thing I have read for a while. Thoroughly enjoyed it.

REally interesting about voice - not knowing what it was

REad quite a lot of his stuff

Batman time travelling - went on and on

For that really liked it, a lot of fun

McGuffin - egg and a ring inside it, there’s a lot of descriuption of what’s going on with ins and outs

Green Lanters and White Lanters - lost from time to time

Probably how you’d have read it in the 60s - a homage to that?

The voice and jokiness struggled to start with, like funny Batman but wondered he’s the straight man and has Robin, but he’s giving as he can straight but witty and cutting at the same time, slight departure for the character but read it again and appreciated bit more and aligned with the Silver Age thign

Like Green Arrow nice excahnge on the roof and he’s gone mad, GA if he beat him - Batman: of course I feel shame. Nice to see that

Story didn’t matter did it at the end of the day?

Stubble though - disappeared in the end? Weird. Stubble for crisis but this didn’t warrant it

Knew this book was out. When it came out was going to subtly poke me to read it. History was 80 Page Giants was going to be mostly reprints, but Bendis was coming onto Superman monthly. Want to do this? Then swap Tom King (Superman in Space?). Listened to Bendis on Word Balloon - heard quite a bit about this. Excuse not just break into Batman without a big run, excuse to explore what part of the DCU gently. Turned out exceptionally well, flavour of the weirdness. Read a lot of Bendis - POWERS

Bendis fan going back, not everything: some of the Avengers then fell off

Used to his touch of humour. What I’d hoped from a Bendis Batman book.

Not a whole lot of depth but that’s fine

Right at the end got a bit Infinity Gauntlet - geting all the powers and snapping finger, Wanda “No more mutants” - then “I’m Batman”

Jonah Hex logo - there are two! Two letterers? One each?

Great really really good book pleased we got to read it

Nice joke with the Hawkpeople - what are you an 8? Bat style wings

Nice bit with Nightwing on the cross-section

4/5 batarangs (the Bat wings and harness being too convenient)