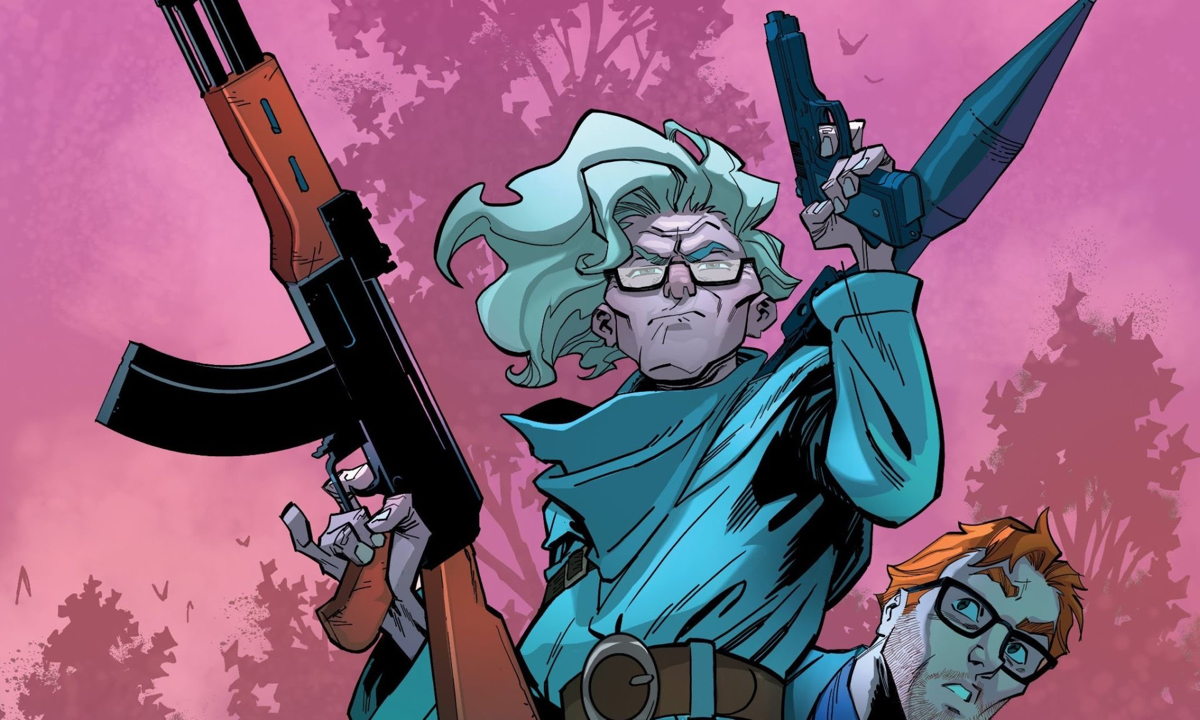 King Arthur’s been done to death.

Reinventions, reinterpretations and reworkings of Arthur’s legend are everywhere in modern fiction. Yet the timeless popularity of this story doesn’t stop authors continuing to put their own ‘unique’ spin on things, mixing up classic tropes with fresh new ideas.

Their take? It’s 2020. Art’s been dead for a fair while. What’d happen if someone brought him back to save England once again? Seems like a pretty nifty idea. Let’s see how it plays out…

Although the general industry reponse to Once & Future has been positive it seems that we all approached the book with a little trepidation.

Why? Well, Mr Gillen is a pretty ‘Marmite’ writer and we all harboured rather strong opinions on his style and approach. What Gillen would we get in Once & Future - The smug, pop-culture machine-gun of The Wicked & The Divine or the sharp, witty creator of Star Wars’ Dr Aphra? 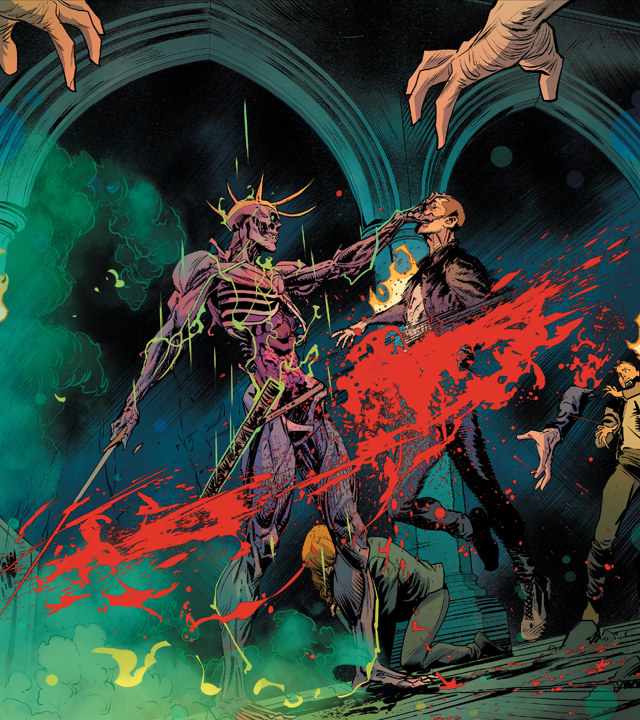 Thankfully, for me at least, it appears the worst of Gillen’s sensibilities have been toned down, making Once & Future probably the most accessible work he’s produced so far.

Thank heavens for that.

“Gillen’s writing is far less obnoxious in this” - Tom

Most of us had less baggage when it came to the artist on Once & Future, Dan Mora. He’s a talented, dynamic artist with a style hewn directly from mainstream Marvel superhero books. He draws clean lines, with a hint of manga in his pointy, expressive faces. There’s no doubt this guy can draw.

Although the art is of a consistently high quality I can’t help but feel it was a case of “the wrong man in the wrong place”. Everything was too clean, too smooth, too polished for me. I missed the scruff and dirt of a more expressive artist.

The other guys could see my point but they were more admiring of Mora’s art than I. Kelv loved it, Jake called it “perfect” and Tom was also highly complimentary of Mora’s work.

Mora’s crisp line work is supported by a really rather glorious colour palette by Tamra Bonvillain. Both Tom and Kelv were reminded of Dave Higgin’s original colour palette for The Killing Joke (before Bolland re-coloured it all - BOOOOO!) - earthy browns, greens and greys are shot through with neon greens, blues and pinks and some genuinely lovely, subtle lighting effects. It’s wonderful work and lifts the art to another level altogether. 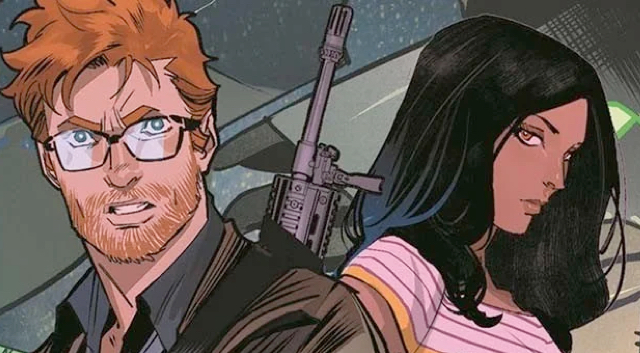 Tell me a (new) story

And the story itself? Thankfully it’s not just another re-telling of the grail story, and for that I am eternally grateful.

It’s a face-paced, thoroughly modern chase set in and around a (fairly recognisable) Bath, Bristol and the South West of the UK. It’s stuffed to the gills with zombies, mythical creatures, secret societies and gun-toting grandparents with arms caches buried in the woods.

Curiously it doesn’t feel very… British though. Both Gillen’s writing and Mora’s art conspire to smooth everything out, stylise it and ‘Americanise’ the whole thing. It’s a rollicking, easy-to-follow tale that could also work as a pitch for a Brit-themed ‘ArthurWorld’ theme park.

“If you were American you’d love this” - Jake

Anyway, It’s definitely on the light and frothy side of things, giving a pulpy twist to the old Arthurian story beats. 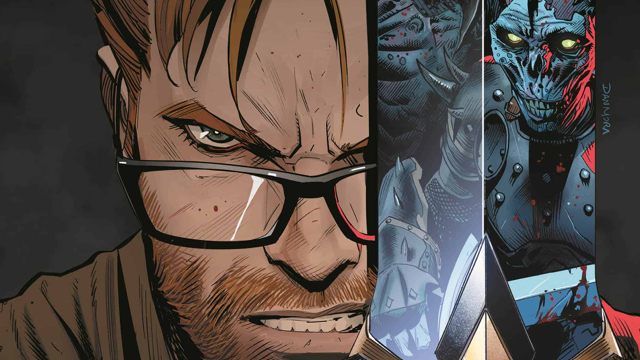 The protagonist, Duncan, is a pretty bland lead. He’s a somewhat bizarre mix of rugby-player build and geeky glasses. I assume this was to give him a Clark Kent level of dorkiness. It’s not a massive surprise when ol’ Dunc turns out to be a bit more than he initially seems.

It’s Duncan’s hardcore gran, Bridgette, who proves to be one of the more interesting characters in Once & Future. She’s sarcastic, caustic and a dab hand with a surprisingly wide variety of weaponry. The book is always more interesting when Bridgette is around.

Hail to the king

And Arthur? It seems that resurrection hasn’t done him any favours as he’s returned as an ultra-nationalistic zombie/vampire blend with a cool line in spiky headware. Art’s seriously limited perspective on what makes a ‘genuine Briton’ is something that Gillen leverages with aplomb. Of particular note is the sequence where Arthur realises that modern Britain isn’t quite as ‘pure’ of bloodline as he might’ve hoped. 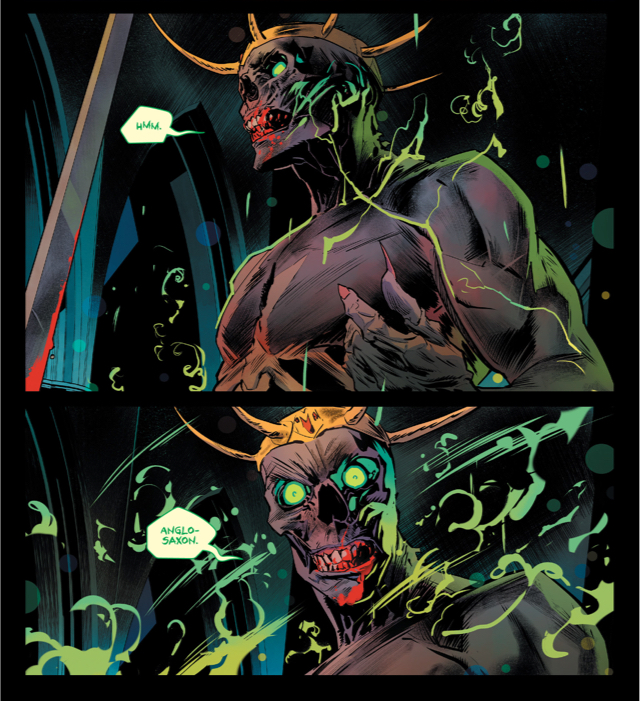 Aside from Bridgette, the other women in Once & Future are really rather disappointing. Duncans super-smart botched date, Rose, is utterly wasted, relegated to the role of decorative candelabra and sidelined by a telling off from Bridgette that amounts to ‘This is really important. Just do it and don’t argue’. We also also get yet another flavour of the sexy fascist which, while fitting nicely with the pulp feel, just feels a bit lazy.

The biggest problem for me, and it is a problem for a number of reasons, is that while reading Once & Future I couldn’t let go of the feeling that I’d read something similar, and much better, very recently.

Injection - by Ellis, Shalvey & Bellaire - covers a lot of similar ground to Once & Future but eclipses it with such a sense of foreboding and dread it’s hard not to just dismiss Once & Future as populist fluff. Jake picked up on the Injection thing too, while Tom noted some parallels with Matt Wagner’s Mage, which we read a while back.

If you like your Brit-Myth action spliced with some superhero whizz bang styling then you can’t go far wrong with Once & Future. I just wish it was a bit… dirtier.