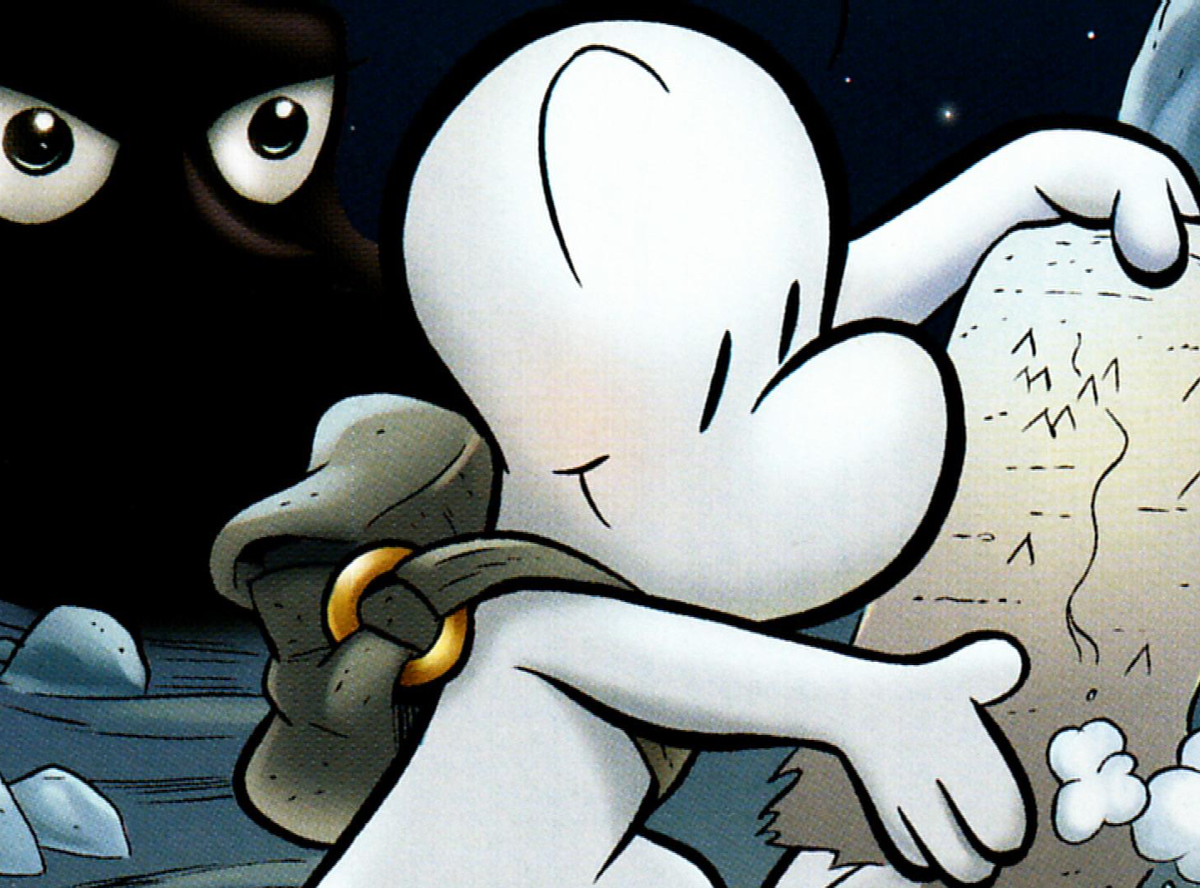 In the CBC we try to steer away from reading anything too familiar.

It forces us to steer away from the easy options and the old favourites when we are running short of ideas. It’s in the rules.

So I can definitely say that I’ve never read Bone before.

Way back in the day I’d purchased a ‘Banned Comics’ Humble Bundle (You do Humble, right? If not you really should do - there’s some great stuff on there!). It appears that the first volume of Bone was included in that pile of comics alongside more obviously spicy stuff like Black Kiss! Weird.

Anyway, I digress. It turns out I have read Bone before. Or, more accurately, I have tried to read it before. I didn’t get very far. Which is why I thought I hadn’t read it in the first place. Oh dear…

Bugbear number one: The names - Fone Bone, Phoney Bone, Bone, Boneville. I’m annoyed just thinking about them. Tom and Jake weren’t quite so irritated by this as I was. Apparently Smith started writing/drawing this when he himself was a kid which could explain a few things.

I don’t really get the Bonevillians either. The cartoony look just puts me off straight away. Are they Moomins? They sure look like Moomins. Maybe we can just leave it at ‘inspired by’ and be done with it. 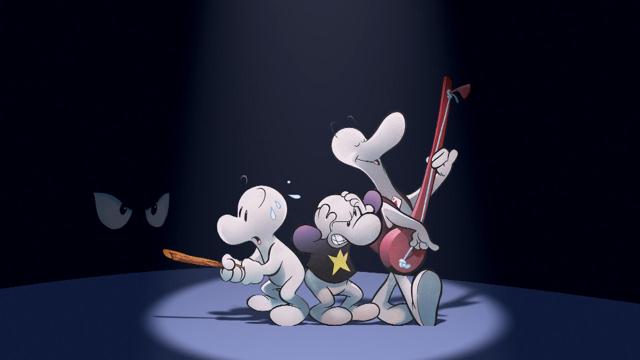 Jake rather liked the styling stating that ‘cute things under threat is basically my thing’. Tom loved the look too as it plays to his strong animation sensibilities.

I’m starting to feel like a grumpy old fart at this point.

So I’m not a fan of our cast, how about the script?

Most reviews seem to consider Bone a stone cold classic. The book comes laden with plaudits left, right and centre.

I couldn’t help but feel that it was pretty thin gruel laddled over the top of some cutesy, twee croutons. It’s a mish-mash of epic tales such as Lord of the Rings and American newspaper cartoon strips such as Peanuts or Garfield.

Jake wasn’t quite certain where it was all headed during volume 1 but didn’t feel like reading it was a chore. He wondered whether Smith had a plan at all or if things would just continue on as a series of vignettes with some vague backstory tying it all together.

It’s a fluffy work of some depth

Tom, however, was well aware of exactly where the story would go. It turns out Mr Evans is a Bone superfan and brought all 9 volumes of Bone to the meetup. Tom was of the impression that the story became a bit more cohesive in the later volumes and that Smith definitely had a plan for where it was going to go. Jake confirmed that things came together a lot more, story-wise, after the cow race.

It’s got a cow race in it (I don’t consider that a spoiler BTW). That should tell you all you need to know about what I thought of the story. Feel free to skip to my score if you’ve had enough of my moaning. 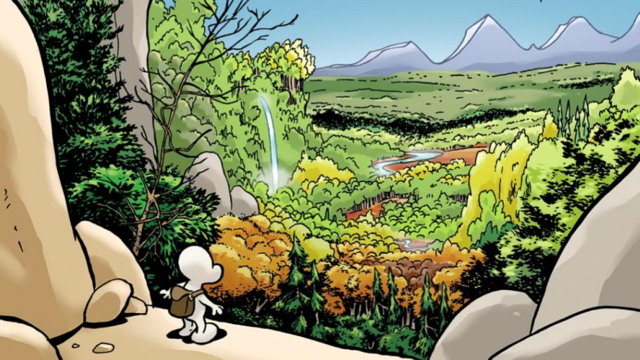 For something that falls squarely into the category of ‘funnybook’ not many of the jokes hit home for me. There’s a handful of clever visual gags - a mysterious enemy who’s speech bubbles disappear underneath their heavy cowl - and a couple of (married?) rat creatures who indulge in some amusing banter.

I was vaguely interested in what the big bad wanted with the ‘one with the star’ but not enough to actually bother reading past the first book. In that, I was the only one as both Jake and Tom devoured the entire run (books 1-9) with gusto.

Just me then? Yup.

So, there’s one final thing I’d like to talk about. Early on in volume 1 we’re introduced to Thorn, a human girl, who lives with her grandma in a cabin in the woods. So far, so classic fairytale setup, amiright?

From the moment they meet Bone is clearly infatuated with Thorn. Initially Thorn appears oblivious to Bone’s fawning and awkwardness around her. Then Smith introduces some weirdly sexualised elements that sit at odds with the cartoony nature of the book. It’s almost subtle - a slim outstretched leg, a hint of cleavage, bare shoulders shrugging off a blanket. 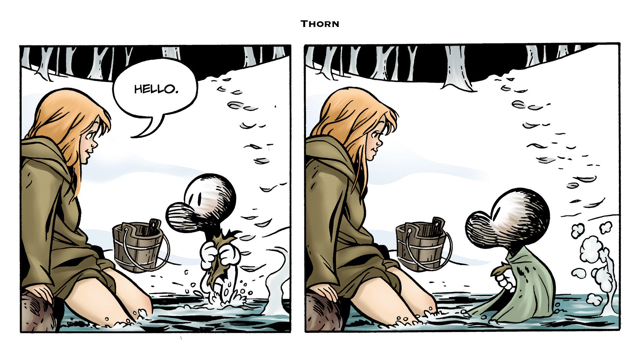 By ‘normal’ comic book standards it’s all very innocent. But I couldn’t help but find this coquettish behaviour uncomfortable and out of place.

Once again Tom and Jake were quick to point out that, as expected, Thorn does become a key player in the story. I’d like to think that she becomes more than just a stereotypical ‘girl-in-the-woods’.

Everybody loved it apart from me. No change there then :-)

Completely biased. I already have an ingrained love of this book
- Tom ⭐⭐⭐⭐⭐

You have to respect the single-mindedness behind it
- Jake ⭐⭐⭐⭐