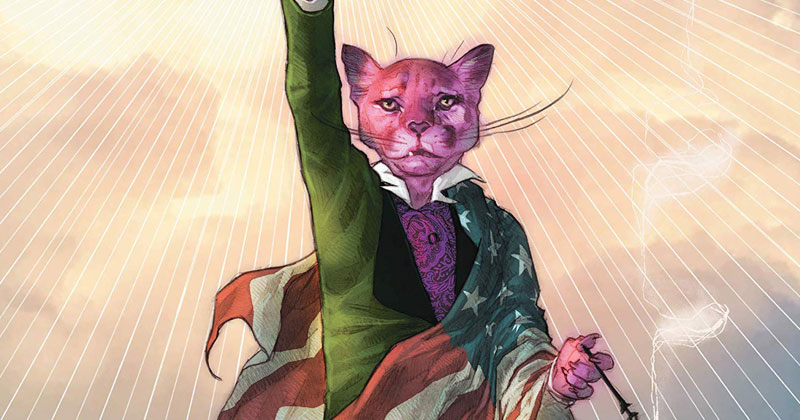 Of late our choice of books had been steering very much away from Big Two books and I wanted to see if we had missed anything, without stepping too deeply into the ongoing plots of shared universe comics. Back in 2016 DC Comics started an initiative called Hanna-Barbera Beyond, where they took characters like Scooby Do, The Flintstones, Wacky Races and Johnny Quest and reimagined them as modern, edgy characters. It sounded like a huge disaster waiting to happen, and yet three years later word was there had been some true gems. 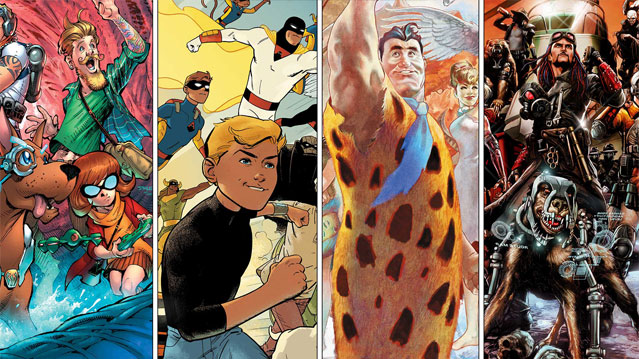 I plumbed for one of the shorter series: Snagglepuss. He was a character I remembered as an ensemble show second stringer, possibly on Yogi’s Treasure Hunt but Hanna-Barbera made so many cartoons it’s impossible for me to be sure. But I certainly recalled Mr Puss’ catch phrase Heavens to Murgatroyd! and the way he finished sentences with …even!

I really didn’t know what to expect with this book and it’s certainly not a comic for children. Russell has taken the point at which Snagglepuss started appearing on TV in 1959 and worked backwards in the real history of the United States, focussing on the political paranoia and the prejudices towards gay culture. Jake found the McCarthyism plot and the way Puss had been turned into Tennessee Williams a little heavy handed but is more familiar with that period than I and liked the references. He was able to get it all without the full glossary found at the back of the collection. For me that was a nice touch! 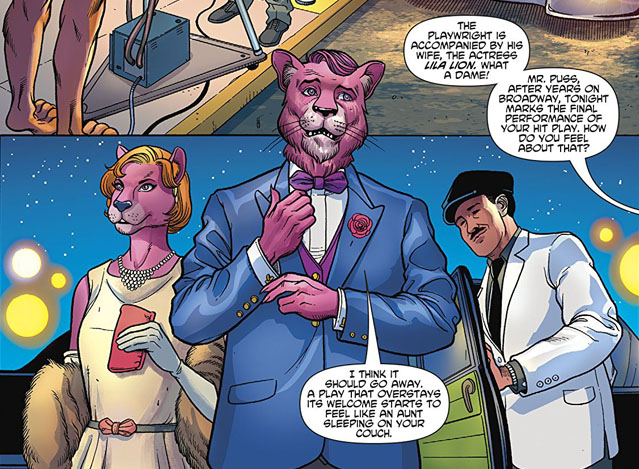 Dan also rather enjoyed the story. He was pretty upset by the section on the Stonewall Riots, I realise now we were actually discussing the event almost 30 years to the day. The book positions Puss as an important figure within the LGBT community of the time but he is not present when the police raid begins. Sadly other characters in the story are not so lucky. The book’s plot really comes together afterwards and comes to a satisfying conclusion, which is to be expected when that is the point Russell began! 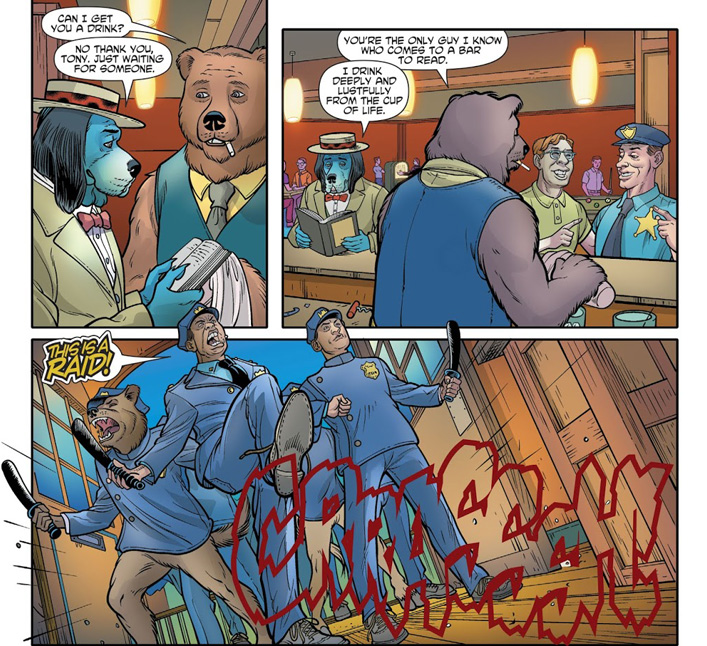 None of us were too enamoured with the art. Dan called it vanilla, like a whole series drawn by a fill in artist and Jake took particular dislike to the depiction of Marilyn Monroe. At least Feehan can draw horses well! But the series covers and even the short story that begins the book are much more to my liking. The proportioning up of standard cartoon aesthetics, particularly in the groinal region, do not help matters either.

Overall, this is a successful book and one that will resonate more with American readers or those with an interest in US culture of the 1950s. Mark Russell also wrote the Hanna-Barbera Beyond Flintstones series, which Jake had read. He thought that book did a more elegant job of grafting social tension to the original cartoon. It also has Steve Pugh on art, which is a win for me.

Here we see how subversion in art gives society direction, as art must be subversive or it dies on its feet. We need the freaks and the weirdos, else we live in dullness.
-Dan ⭐⭐⭐⭐

The LGBT aspect was handled nicely, which you can’t often say. A well-constructed arc with good character voices.
-Jake ⭐⭐⭐⭐