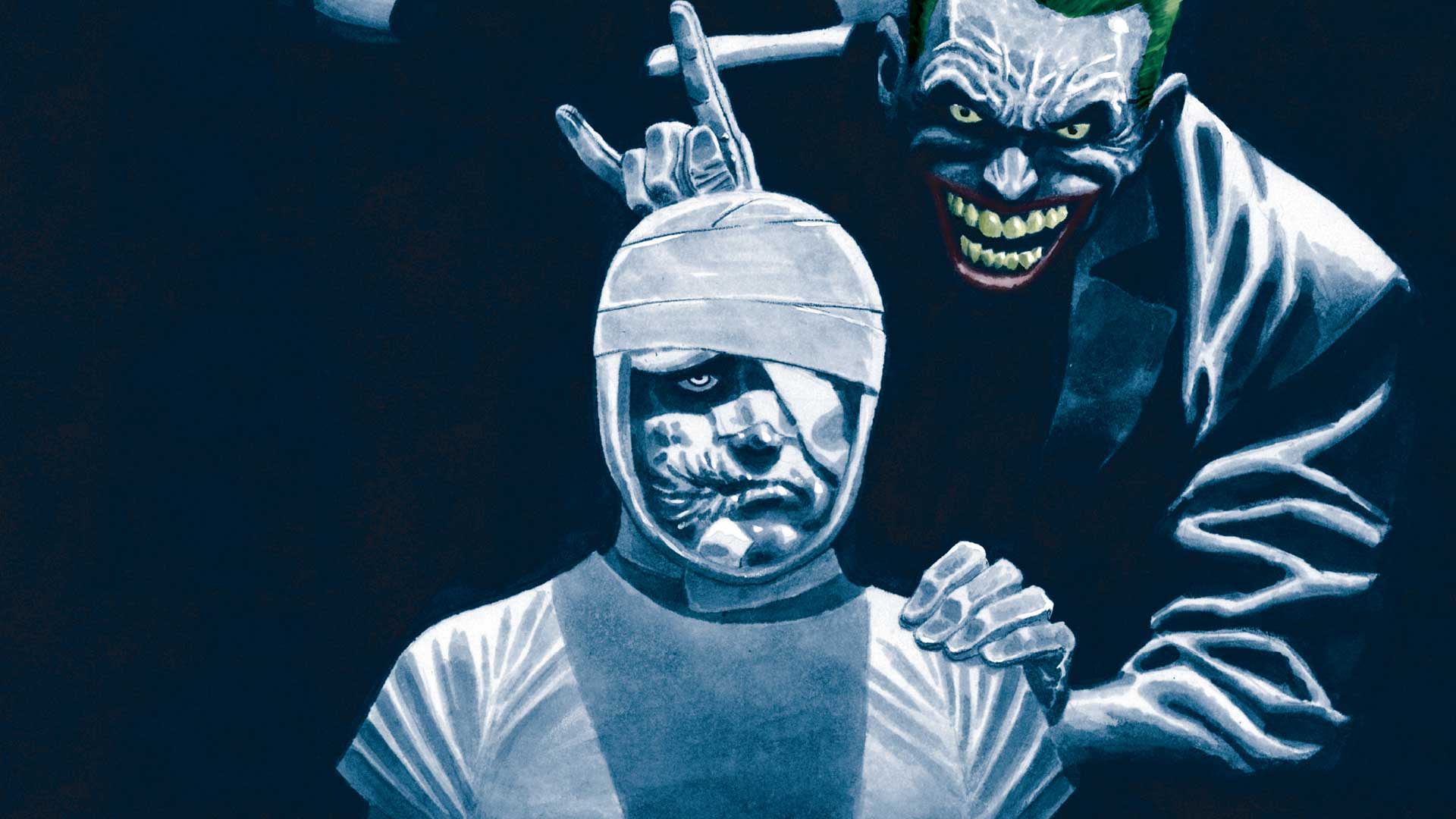 With this rather odd book Paul Dini, the father of Harley Quinn, exorcises his demons from a brutal mugging that occurred nearly 30 years ago and changed his life. Being best known for his work on Batman, the co-creator of Batman The Animated Series contrasts the idealism and heroism of Batman with the stark reality of our world.

BTAS for me is the greatest incarnation of Batman. I first fell in love as a child with Adam West’s fabulous Batman of 1966, but BTAS rekindled a spark. I had known a fair bit of Dini’s involvement in the character, having read and heard several interviews with him. It was in one such interview with Kevin Smith on Fatman on Batman where Dini revealed the past trauma. 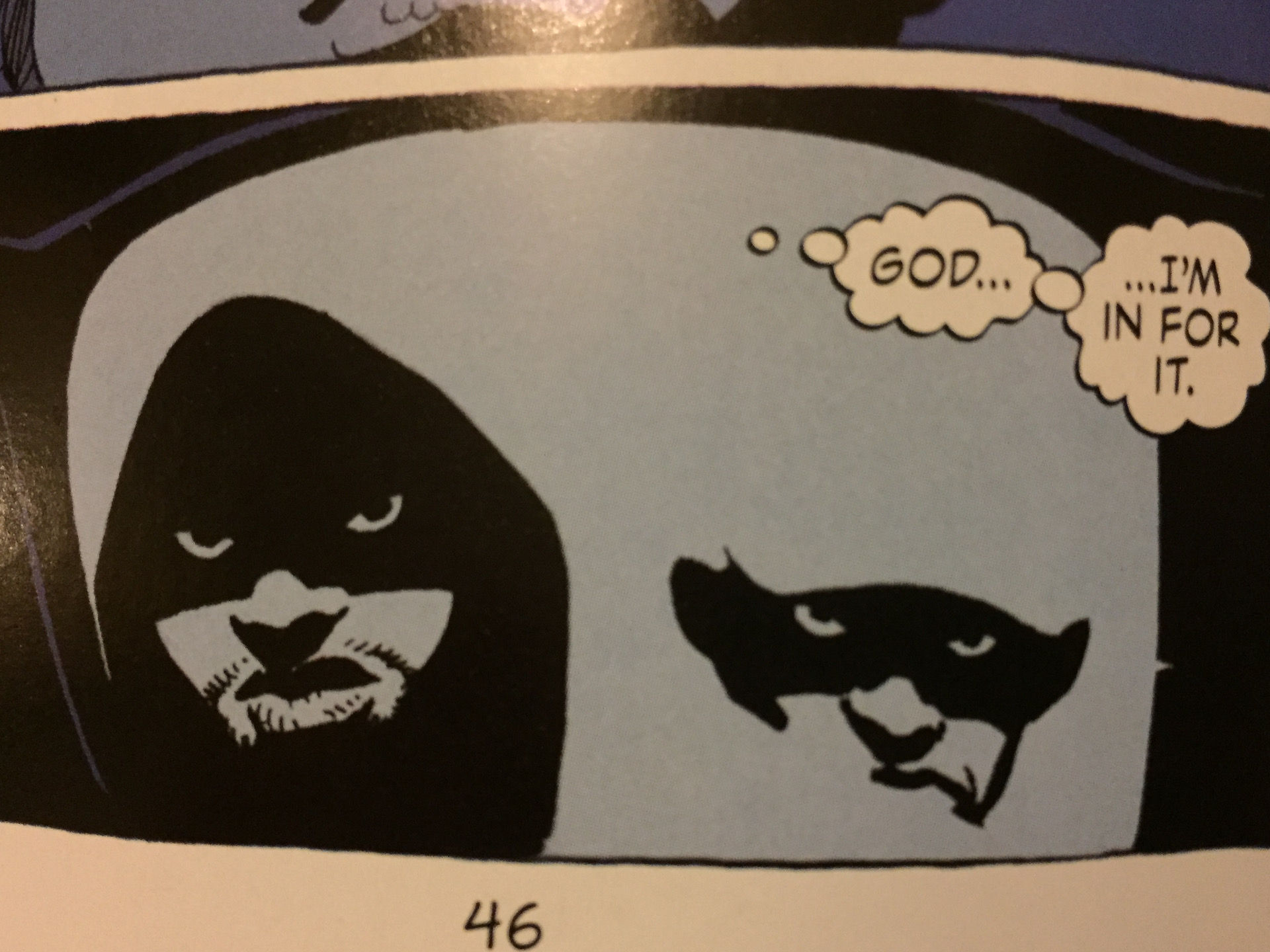 Dini was violently attacked, resulting in parts of his skull being powderised. He was lucky to be alive. The trauma was hard to bear as he worked on Batman. He couldn’t summon the spirit of heroism that Batman embodies, when he was at his lowest ever in his life with no one to save him when he himself was a victim of crime. Kevin Smith encouraged Dini to turn this experience into a story. Dini, perhaps as some form of catharsis, eventually took up this challenge.

Dini is very open with his emotions. I have heard him crying, voice quivering, several times during the course of his interviews when he touches upon subjects that are heartfelt. When he first opened up about this incident, it was perhaps the biggest breakdown of them all. And no wonder. 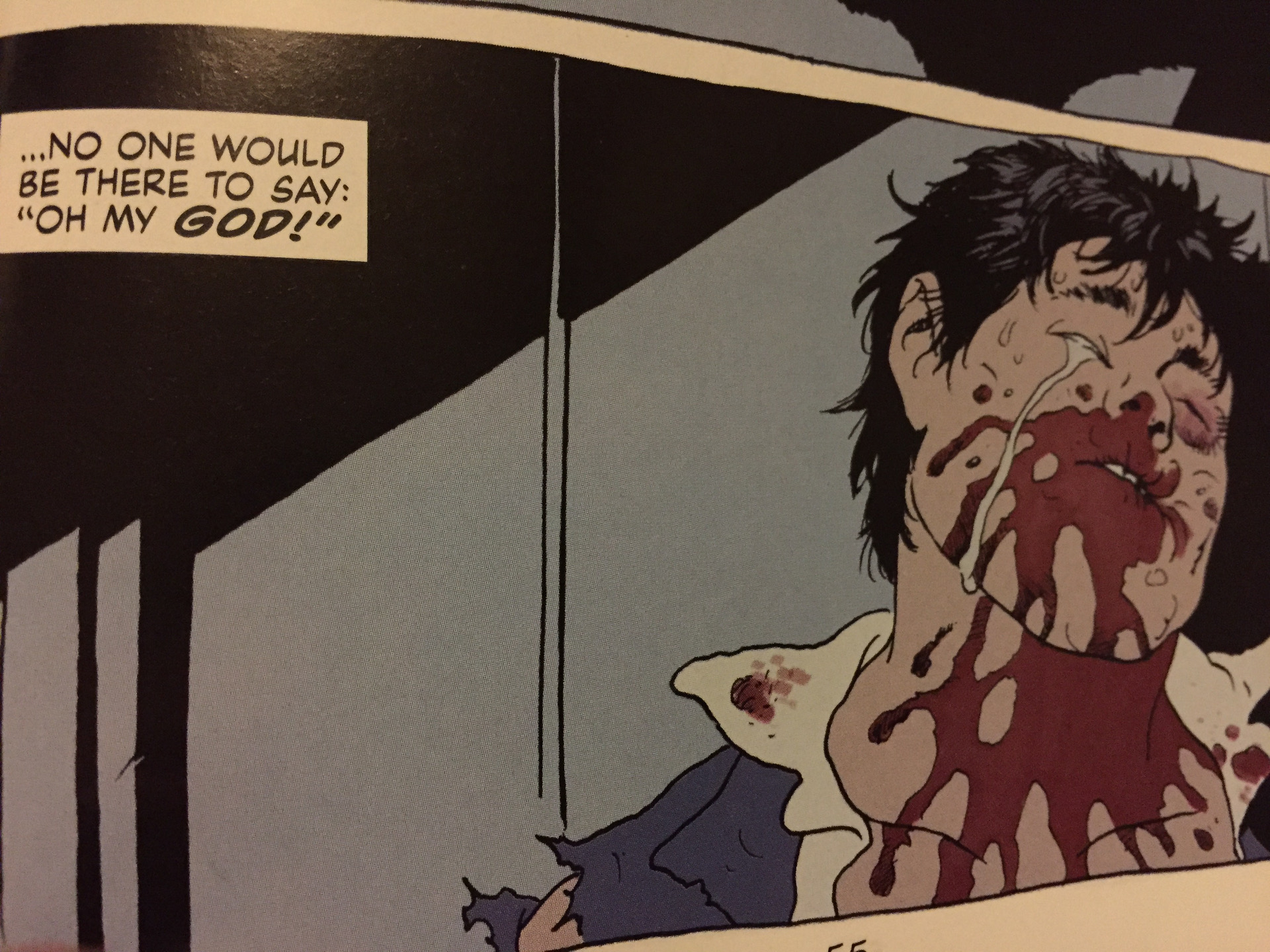 And this book is difficult reading in many senses. Frankly it isn’t a story, it’s more like going along to some else’s therapy session. There is a very strong sense of self-loathing and self-destruction from the outset. This all fits with a person who is not able to hold back their emotions. I feel this is a quality that could make for a great writer. But again, in this instance it isn’t a tale. More of a psychiatric report and it’s not much fun.

Typography is important to Dan

He had picked out that the cover was designed by Chip Kidd. But what a disappointment. It looked odd, with the 90s font (perhaps because the book is set during the 90s?) but worst of all the use of mixed case (the font trope for “crazy” I reckon). But not hitting the font notes with Dan is not a good start. Dan thought the dust cover was crap for such an expensive book. The cover underneath is much better.

Dan will never read this again. He had no idea what it was. Wibbling his hand side to side “weird” was how he described it. The beating up sequence scared the crap out of Dan. This wasn’t white middle class panic, as Dan isn’t one to judge a pair of hoodies (he wears many). It made him genuinely upset. Sadly I was oblivious that there were parallels to a similar experience in his youth. Sorry Dan 😞.

This scene to Dan seriously communicated clarity and helplessness. That was fascinating but pretty much the most interesting bit of the book. Batman was otherwise shoe-horned in. It didn’t need the characters as the human story was interesting enough. But Dan doesn’t usually like “real life/true crime” as a genre.

As for the art: Dan has never been a fan of Eduardo Risso, not having liked 100 Bullets. Frankly I didn’t either, nor his run with Azarello on Batman when they followed Loeb and Lee’s seminal Hush run. But I liked his work in this. Dan had mixed feelings where some of it was lovely, and some was so crap that he hated it.

The biggest problem for Dan was that he couldn’t really sympathise with Dini’s plight. After getting beaten up, he should have learned something from it and become better. I sensed that Dan felt that he just gave in to being “damaged”. To be fair, Dan is a very chirpy and greatly optimistic fellow and I admire him hugely for having such a quality. It would need to be a far greater tragedy, I think, for Dan to see the despair. 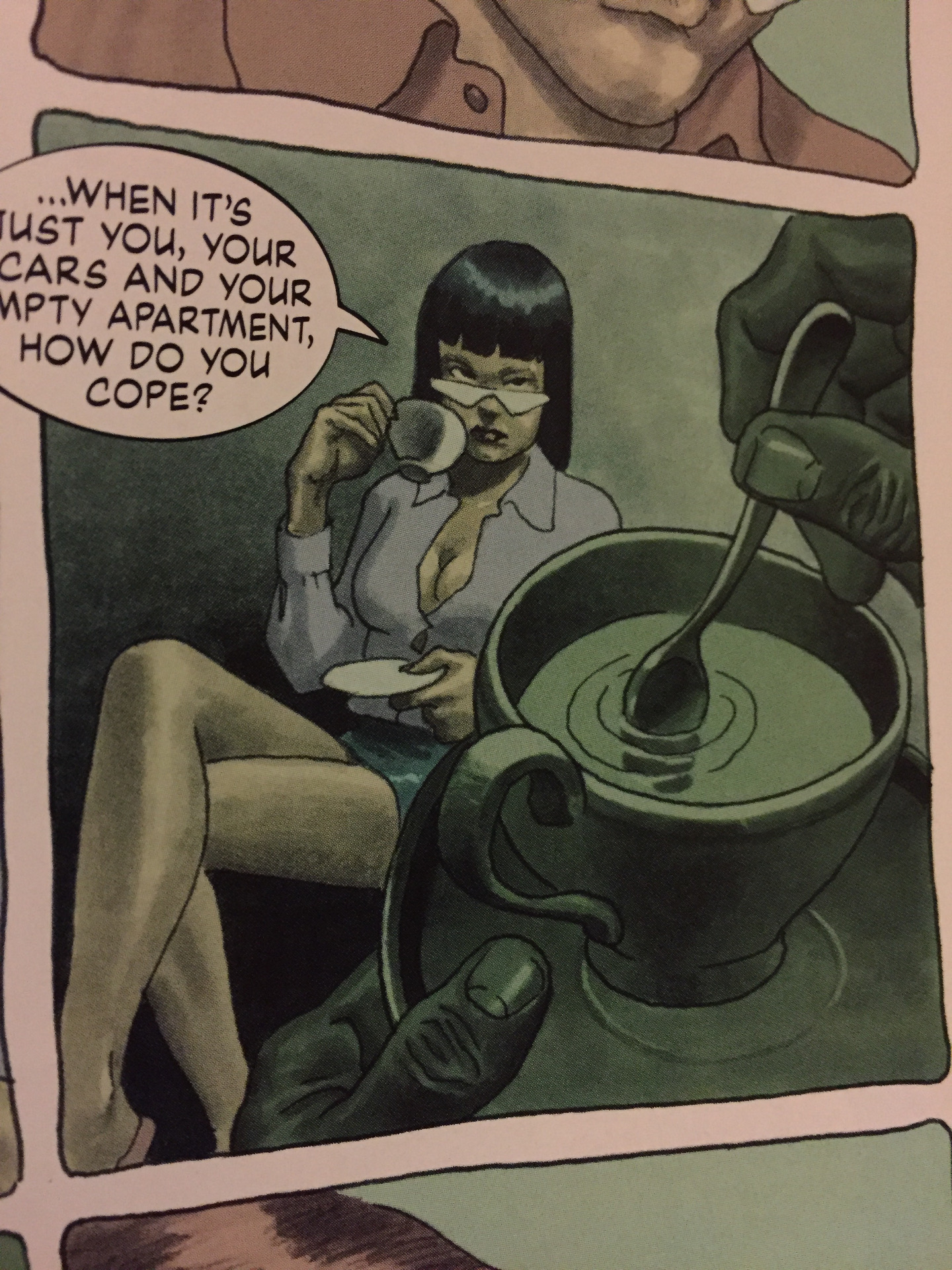 The thing that bothered Dan the most was the lascivious depiction of Dini’s therapist. For him it served no purpose and was simple objectification.

Finally the house ads in such a beautiful book jarred. It felt to him like DC didn’t have enough faith in the book.

Tom was initially pleased to read a “regular comic”, showcasing recognisable characters and starring one of The Big Three. He totally agrees with Dan about the dust cover. Was the book just too odd for Chip Kidd? Tom hadn’t read much of Paul Dini’s work and even had him confused with Bruce Timm(!). But Tom thinks that Eduardo Risso is great. He said that he’s good at leaving things out, like eyes in silhouette. But he described it as “not pretty - quirky” with personality and character. He preferred the solid black, pen and ink pages than the highly rendered, painted stuff. Tom mainly loved the Risso’s work on the book. His favourite panel was Joker’s pie in the face. 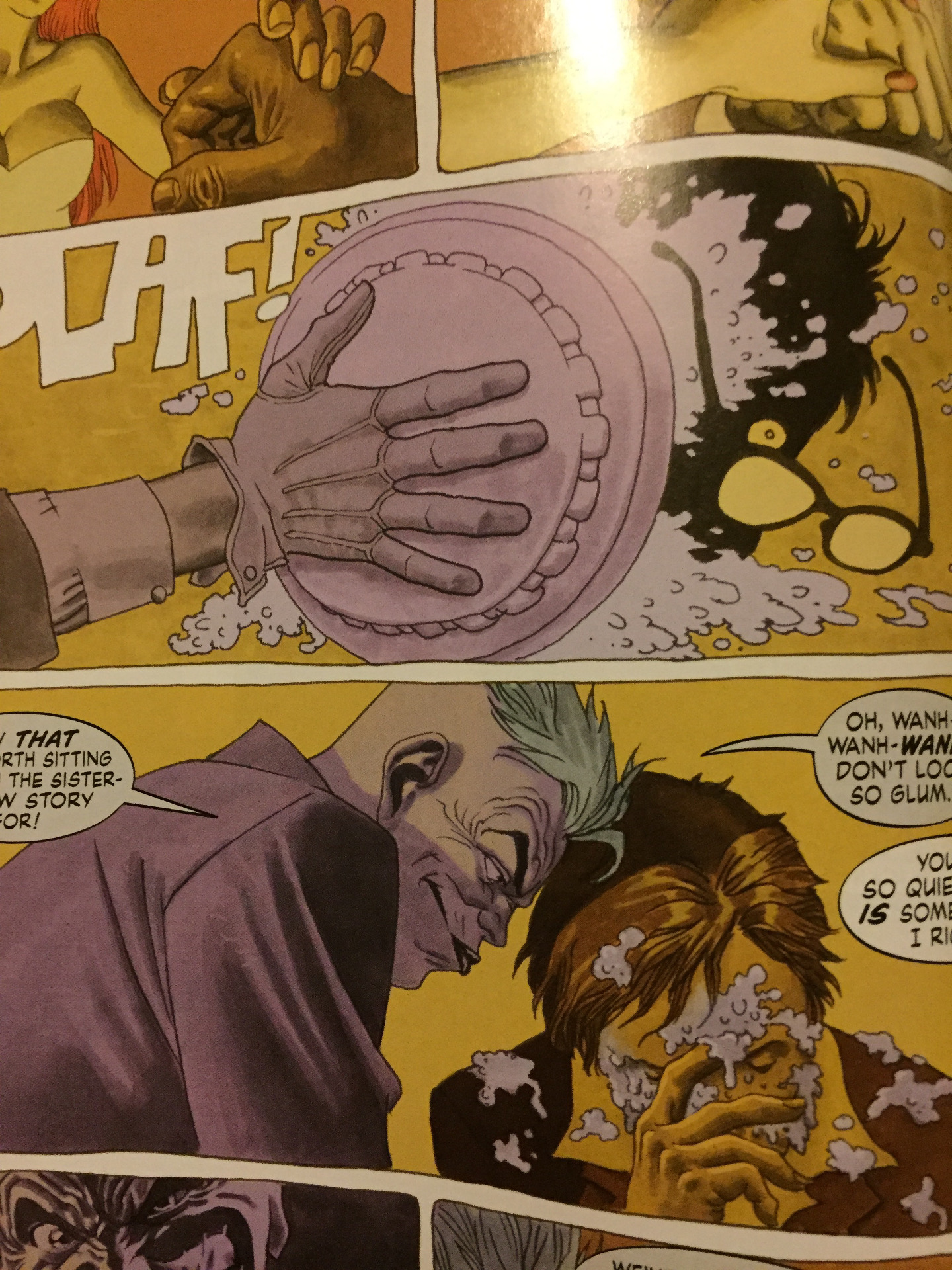 But when it came to the main character, Tom didn’t feel it was a story really worth telling.

He also noted the analogy where Joker is walled away “didn’t really have anything to do with anything”. And the end sequence where Dini proclaims that Batman had told him to pick himself up again. Tom questioned whether he really did.

I think the art is fantastic. The story give or take really. – Tom

It’s not a masterpiece

Jake opened up by calling it a vanity project. He had initially liked the idea of mixing reality with Batman, but needed more to cling on to for the story than Dini’s personality. He also didn’t have the context of Dini’s stature at WB Animation, not knowing that he was a BTAS co-creator or developed Animaniacs for Spielberg. He just thought he was a hack 😄.

Jake also thought the beating visceral, but it lost power because he wasn’t rooting for Paul. And he found it jarring that the fictional characters were overplayed. The classic comic book problem of piling in the rogues gallery. Just The Joker and Batman would’ve been good. But it ended up feeling overcrowded.

It needed reigning in a bit, but because it was a vanity project (not in a personality sense) it didn’t gel. He pointed out that it needed an arc that concluded with redemption. But this was lacking. He also questioned what the lesson learned was.

He was supposed to be learning from these characters as they’re part of him but really they’re not. They’re just Batman characters.

It wasn’t even a missed opportunity. It was his opportunity to tell this which wasn’t very good.

I didn’t feel that this was a strong story either. I enjoyed the art like Tom. However I was disappointed and felt I needed to defend Mr Dini for the harsh view all of my club mates had for him. They didn’t like his character as a self-pitying, self-loathing, self-destructive, leering basic human. But in being human, it’s sometimes human nature that a perceived “weaker” entity is viewed with disdain. My view is that Dini suffered mental health problems that he is never going to be rid of, the attack being his lowest ebb. I think his statement to hear Batman’s plea to “stand up” really is as simple as that. Just standing up and not being trapped in the despair he could have spiralled into. He just carries on. For some people that is a hard battle. His message to himself, and to reader, was clear to me. He was trying to not punish himself for what happened. 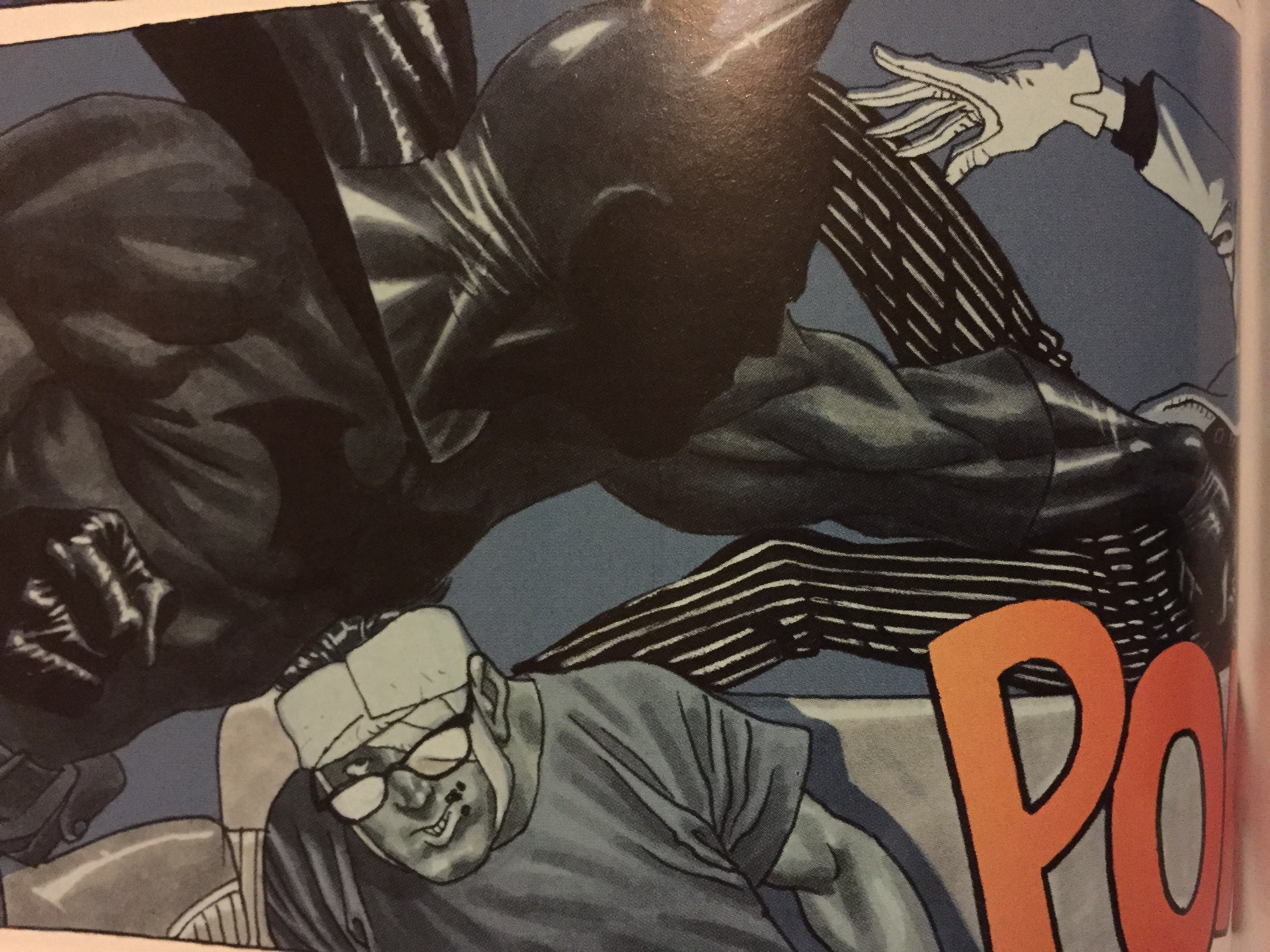 I’m not saying that I like Paul Dini. I don’t know him. My opinions on his mental health is gleaned from what I’ve observed. I fear that putting himself as the subject of a comic book story was viewed as a tale for entertainment, rather than a raw autobiography. There are uncomfortable moments in the book, such as the depiction of his psychiatrist and especially when he was trying to flaunt his meagre wealth at the superficial actress to make himself feel good. But perhaps he was being so overly open that this was indeed a deep-seated attraction? (I’m being defensive again 😏).

As a few of us have said this is an odd book. I had high hopes with the association to BTAS but have yet to pick a Batman book that the club collectively enjoyed. I did however love that Dini had his lasting legacy Harley Quinn appear and not in corset and hot-pants form (because that’s what the fanboys love), but the more innocent animated style jester costume. The real Harley. Although it only occurred to me as I was taking the pictures of the book to illustrate this review (months after our meetup), the connection between Harley and sultry psycho therapist. If Dini did not have an inappropriate (victim/saviour dynamic) crush on her, would we have Harly Quinn? Not so innocent after all… 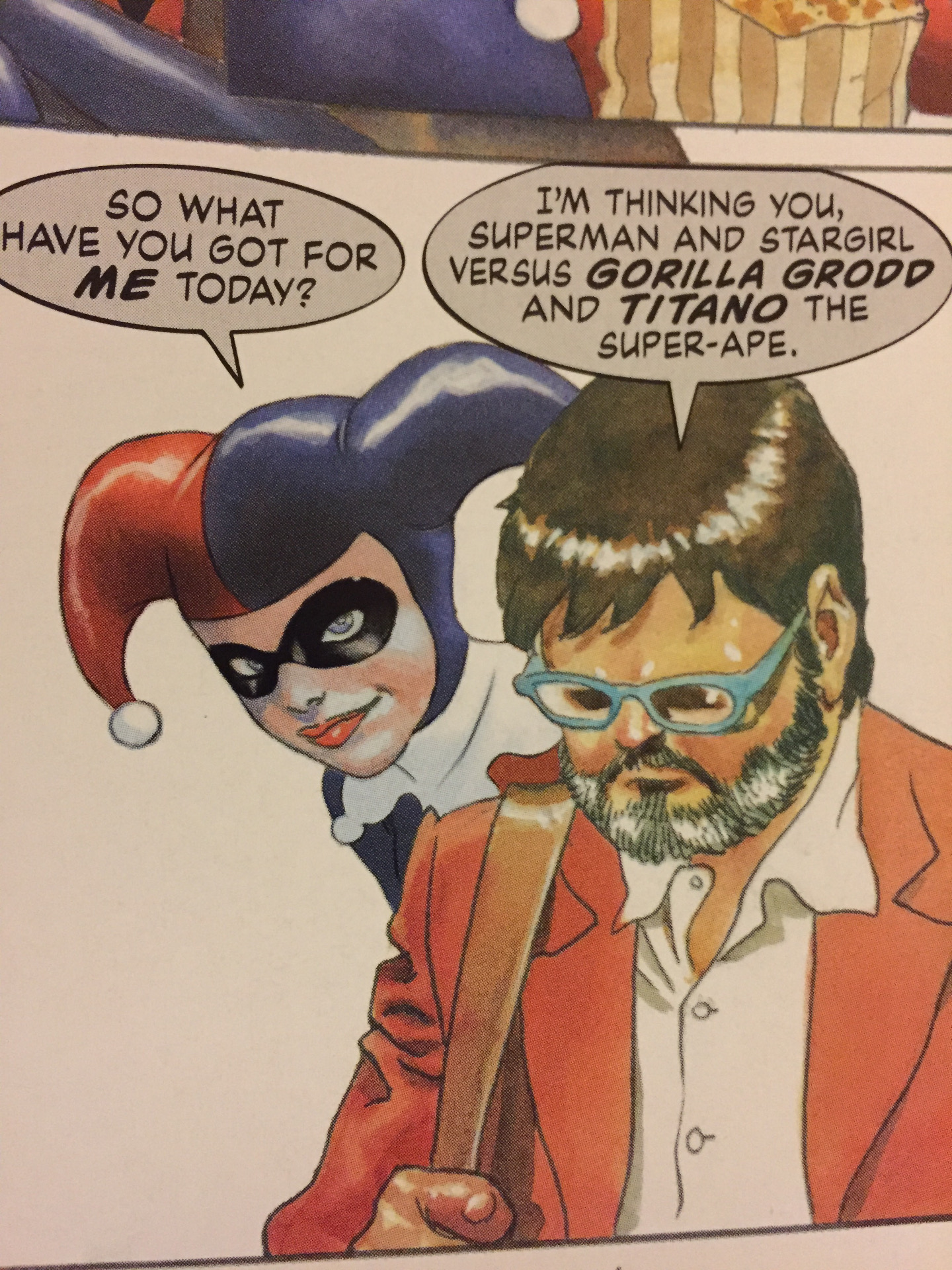 As a BTAS nerd I pretty much already knew this story. I think I liked yet another insight into the time of BTAS’ creation. So basically I did enjoy it overall, but I am not clear how much of my enjoyment is due to this being around BTAS’ history. If it is, does that make me a fanboy? Perhaps I’m beating myself up too much for liking it 😅.

It’s not easy reading but I liked the art. I just want more Batman The Animated Series.