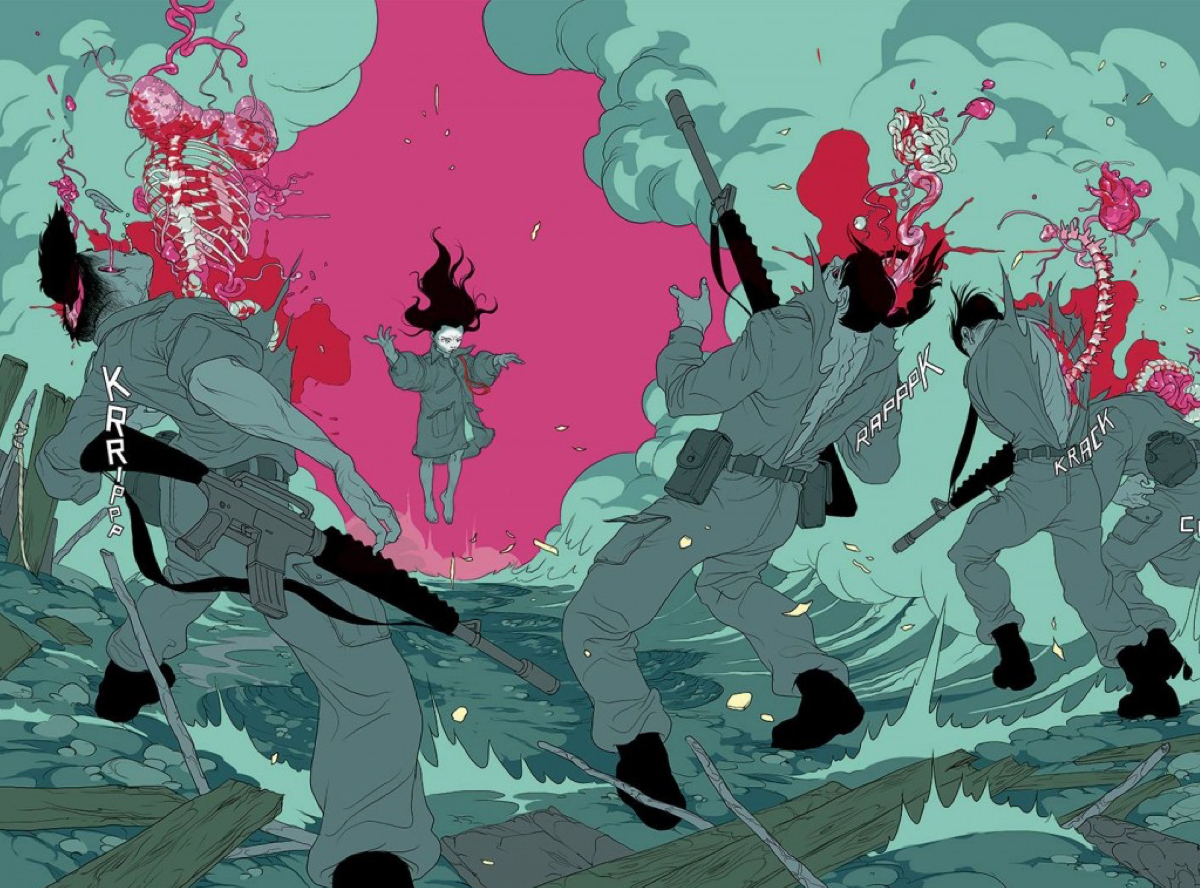 Continuing my mission to select books off the beaten track, I chose The Divine based solely on its cover (and a likely google search for well received OGNs). Knowing little about the content I ordered it at the same time as my last pick Sing No Evil and it also sat by my bed while I pondered whether appeared to be a good fit for the group. 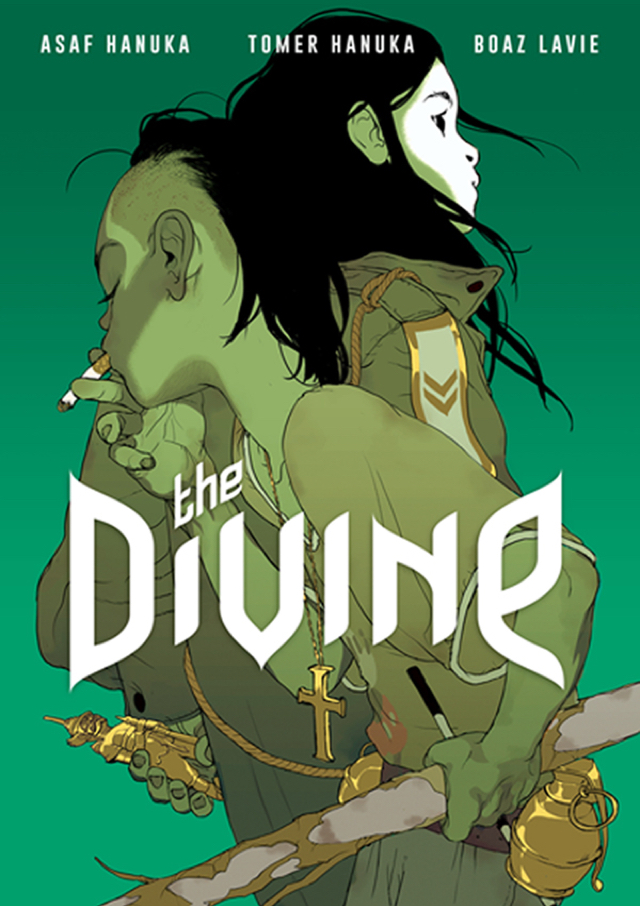 The creators were new to me, another pair of creative twins to match Moon and Ba of my first pick Daytripper. Asaf and Tomer Hanuka are Israeli born, though the latter now lives in America. They each have individual styles as artists but their collaboration on The Divine (with writer Boaz Lavie) has produce a third unique vision.

The book came about after they saw a photograph of yet another pair of twins, this time young Burmese boys snapped in 2000. The photo was shocking as it showed the boy’s arrest following their taking 800 people hostage in a Thai hospital. 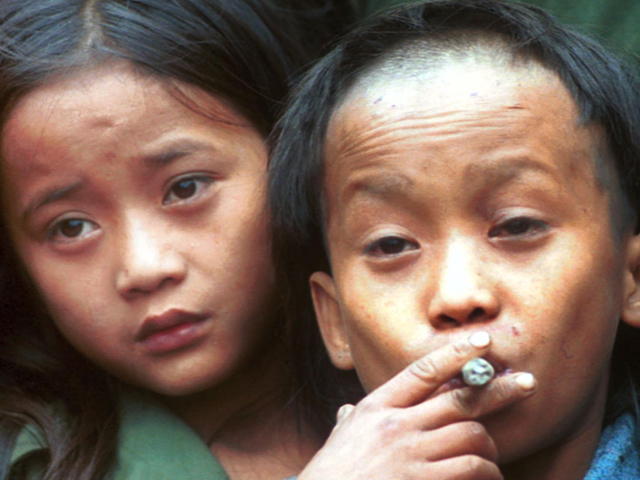 The boys were 12 at the time and legends had grown around them as supernatural beings. This idea stuck in Tomer’s head and inspired him to paint a series of illustrations of the boys exploring their war torn upbringing and possible magical connections. Eventually with the collaboration of Lavie the story grew into the graphic novel, drawn by Asaf and coloured by Tomer.

We all found the story to be rather run of the mill, stewing in Hollywood tropes and genre traps. Kelvin said he didn’t engage with the lead character, struggling to recall his name, and found him two-dimensional. Jake said he and the other lead were unmemorable, though he enjoyed the setup and thought at first it would be a psychological story. The character Mark (I had to look) is an expectant father pulled into a money-making expedition with his ex-military hardass coworker. Flying to the (fictional) country of Quanlom to blow up a mountain, they encounter resistance from the locals as well as their supernatural friends.

Reservations about the plot and characters aside, I think the comic craft in the book is excellent. Asaf has a fantastic handle on the medium, laying out pages with varying panel sizes: compressing when things get talky or fast, and expanding for the money shot of a beautiful mountain or explosion. The early sequence of Mark’s aircraft flight away from his pregnant wife was particularly well paced. The angle turns in each panel as the plane ascends and she looks on, feeling discarded, and we all felt the blackness of a long-haul flight while looking at the simple aircraft alone on the following two page spread. 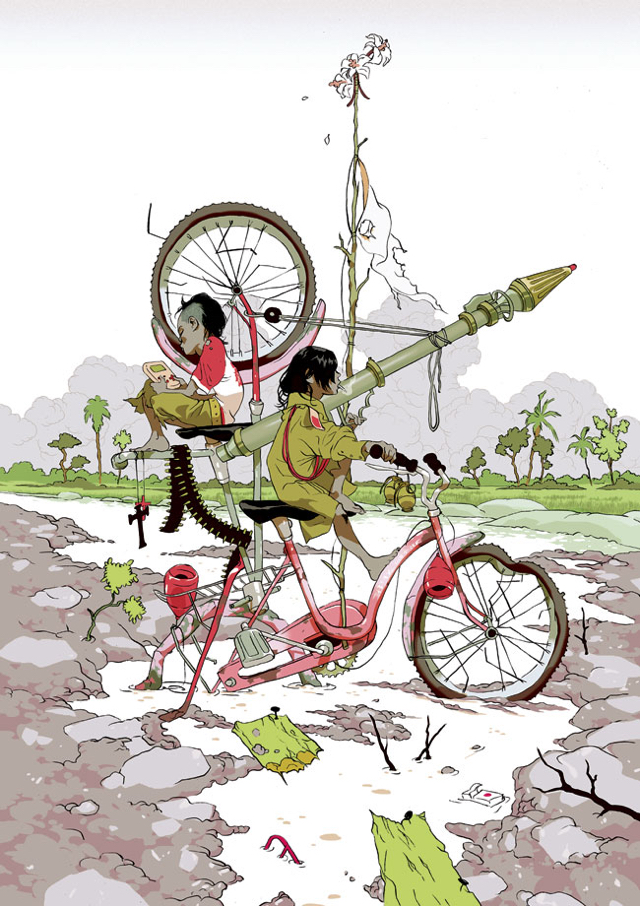 Dan, ever the contrarian, blurted out he hated the art! He wished the book had all been like Tomer’s original illustrations (seen in the back of the book). He thought the faces were lumpy and not good characterization. Tomer’s aesthetic is felt in the pages though, in his use of glorious flat as well as rendered colours. He uses simple palettes, different for each sequence of the story, and striking contrasts as well as dull tones to punctuate the magic and violence.

When things got bloody, the book excelled to Kelvin’s taste. The sparks of violence erupt from the pages and, in this modern age of graphic television, he liked the fact there was still things that made him go WOAH! Jake pointed out the section in the cave as particularly well illustrated, the darkness feeling oppressive with vision limited just to the path and immediate people. The shadows make it feel pitch black.

I enjoyed the fantasy elements of the story, though wished they had not been spoilt on the book’s gatefold cover flaps (and here now too I suppose, though I think we have all spoilt our books in these write-ups to date!). There were callbacks to AKIRA, and Princess Mononoke. Clearly the brothers were inspired by Asian comics as much as the Hollywood blockbusters the book seems to be aping. Dan liked the designs of these too, mainly again because they were drawn from those oft-mentioned original illustrations. 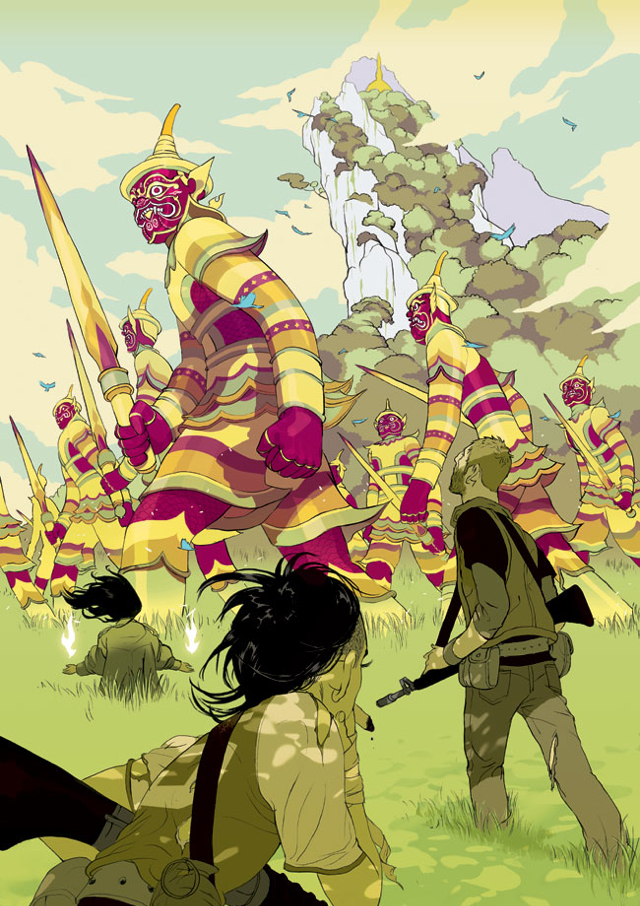 While we all appreciated parts of the story, we were also all troubled by the driving force behind the book’s creation. By including the photo of the two boys in the back of the book, the creators sought to paint them as Cool, however Jake said it placed the book on ethically dodgy ground. Kelvin said these characters were the only ones he felt for, but it was all distasteful sensationalism. Dan said it trivialized the lives of these true child soldiers, turning them into freaks with a smidgen of a backstory. We are made all too aware of our own privileged lifestyle in the western world when confronted by these realities. By seeking to build upon the rumoured mythology of the two boys, the Hanukas could be seen as exploitative.

Kelvin gave the book three stars; had the story been on a par with the art he said it could have been higher.

Jake felt the same, it was Kool with a K but too much pitched as a movie treatment a writer boshed out in a couple of days. Three Stars

Dan was more scathing, his two stars were solely for the illustrations at the back of the book. He also thought it was overpriced!

I give the book three myself as well. I feel I have found another fantastic alternative cartoonist to follow (the next steps for reading the work of Asaf Hankua is webcomic The Realist) but don’t agree with the praise apparently heaped on this book by the likes of Publishers Weekly and Yann Martel (author of Life Of Pi).