Welcome to the 80s, where everything is cool.

The prevalence of retro culture in modern entertainment has gotten a bit much of late. Yes, we enjoyed Stranger Things, yes we approve of the upped mean tempo in popular music thanks to the return of the synthesiser. But it’s getting to the point where any time someone is looking for a different angle on things they reach for the box marked nostalgia. I suppose part of this is the age of creators, I feel like we are all turning into our parents who disapproved of the music we were listening to and said “no you really should listen to this it’s much better”. I’m going to stop using the ‘we’ here and admit to being guilty of attempting to break my children into the movies I saw and loved as a child; it was my father who lent me his vinyl copies of The Doors, The Yardbirds and Television. All of which is my way of saying EVERYTHING just wasn’t original enough to fly with this group. 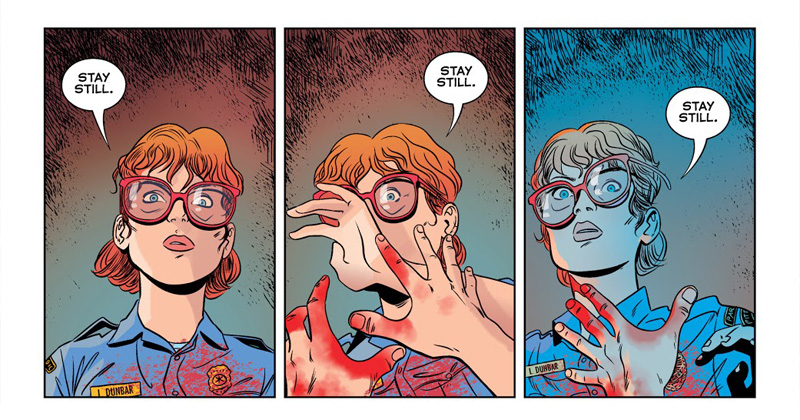 I wanted to bring something from Karen Berger’s new imprint to the group. She left DC’s Vertigo Comics some seven years ago and that line is now dead, as creator owned mature reader titles are not what new corporate owners AT&T want, even if there is still a market for them. Now she has Berger Books out of Dark Horse, for whom EVERYTHING is writer Christopher Cantwell’s second series following 2018’s She Could Fly. The fact he was here collaborating with artist I.N.J. Culbard is what mainly got my attention; Culbard is a mainstay in 2000AD, where he featured in half of 2019’s progs thanks to Brink, his SF strip with writer Dan Abnett. Culbard’s sparse style appeals to me greatly. His characters are expressive and slick and his clear storytelling always leads the reader along nicely. 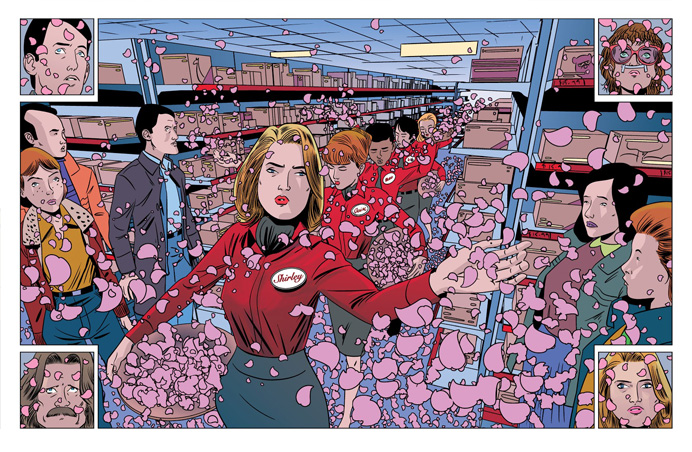 EVERYTHING then, (finally) is the story of a new shopping mall opening in a small American town, and although this seems to many a good thing, it turns out there are shady/mysterious/insert adjective here goings on and the staff may or may not be robots! I think I can say this in a review as the cover has manager Shirly with lasers coming out of her eye. I mean, it’s right there isn’t it? Actually, the cover is pretty nice. Said laser is a spot varnish and the cover also has French Folds so it feels like a premium edition. Dan and Jake missed the feel of the book though as they went with digital editions, but were glad to have done so as this saved them £££ on a title they really didn’t click with! Kelvin’s girlfriend Laura said it was a page turner but he has now completely forgotten he read it at all, which is never good! 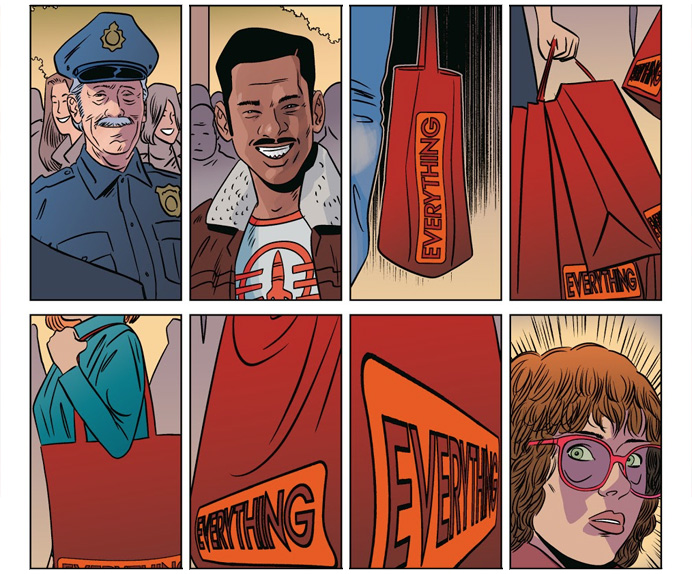 I think I’d return to the series to see where it went (I was annoyed actually that I’d missed this was only part one of the story) but it didn’t set the world on fire for originality. I’m hoping my meh-ness with all things retro doesn’t spoil the upcoming Wonder Woman 1984!

I wish someone else was drawing this as I might enjoy it more, although it still thinks it’s cleverer than it is
-Dan ⭐

I’m struggling to know what to say. I’m trying to get a handle: it’s not great at all?
-Jake ⭐⭐

Give you none of the chills found in Twin Peaks and I don’t actually care what happens next.
-Kelvin ⭐⭐⭐