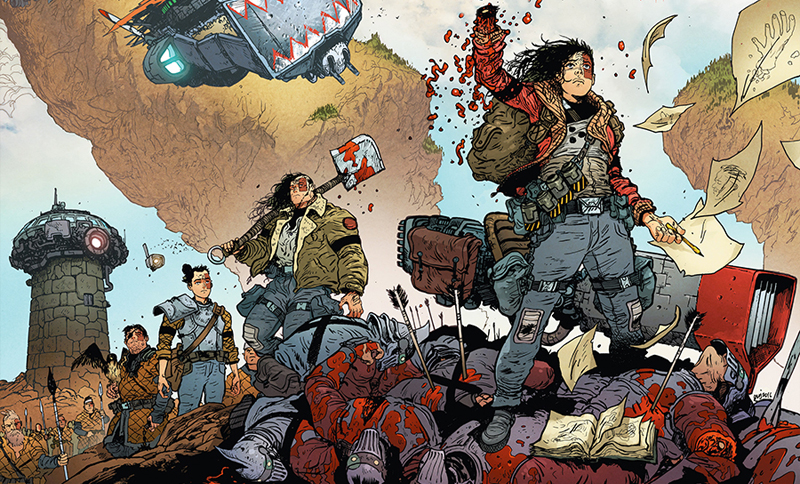 It’s fair to say that when I’m looking for a book to pick, I look to the art first. In the case of Extremity I was looking to Daniel Warren Johnson’s (DWJ) Instagram posts and in this case I was blown away. He had some fantastic fan art of Transformers and Star Wars, two franchises close to my heart! He has even drawn a mini-comic called Green Leader that you can read online for free and as of yet he has not been sued by Disney. It’s that good. 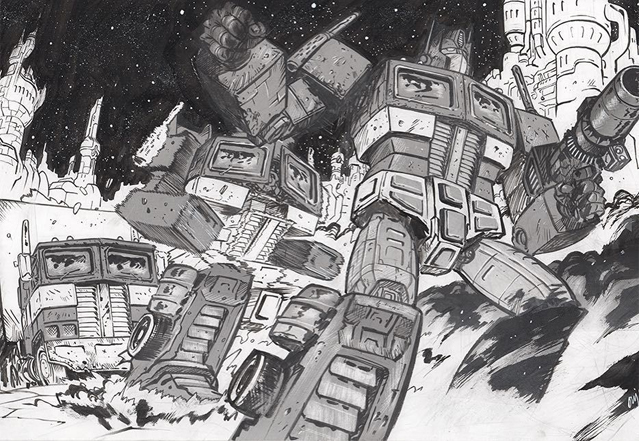 I heard of his webcomic Space Mullet via the 11 O’clock Comics Podcast, who did a great interview with him prior to working on Extremity (here), and was keen to see if his storytelling matched up to his artistic chops. Space Mullet I decided would be a harder sell to the group, not least because it is incomplete: the Dark Horse Edition is only half the story and due to his paid endeavours he is yet to wrap up the online serialisation. I was fortunate that the timing of my choice coincided with the release of the second Extremity TPB so the option was there for people who wanted to read the whole thing in that format. Dan it turned out had read the first issue before as part of a Humble Bundle, but had very little recall as it was jammed in with a whole bunch of other stuff from that deal. Jake was lucky enough to find a comixology sale in time for our meetup so he was able to complete the story as well. 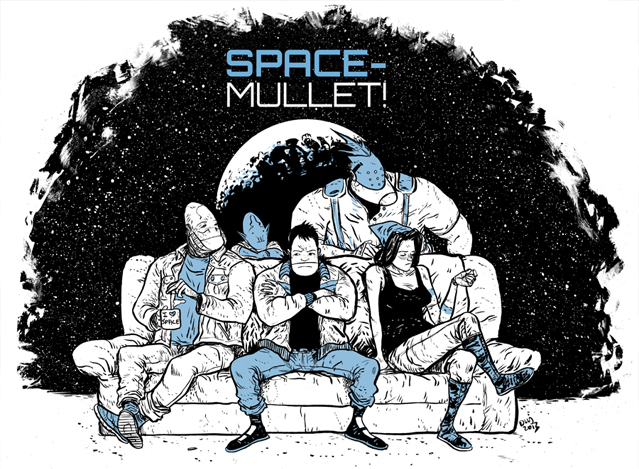 Reading the book it’s immediately clear how strong DWJ’s handle on the medium is. There’s no rules to his page layouts; he knows when to work a grid, when to go dense and when to open up for a grand reveal. And oh those splash pages are gorgeous to behold! All of which is rather sickening when you realise he only started working in comics earlier this decade. 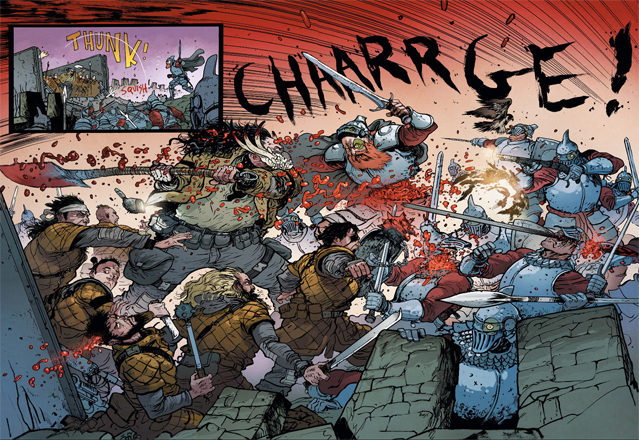 Jake and I were waiting for Dan to cite the Paul Pope influence on the art style and although he did, it was as a compliment. He loved the grungy character designs, especially Jerome with his Death Spade and mask of teeth. Jake pointed out that Pope’s Batman 100 featured a mask of teeth as well. I called out the manga influence in the speed lines and character faces but later also learnt that specifically Appleseed is a big influence for him. The technique of rendering in a distorted manner can be seen in that Manga. I found that particular touch to be a visual boon on top of DWJ’s ability to draw just the right moment in each panel, emphasising weight, impact and reactions in the characters. There’s also a fantastic use of drawn sound effects on almost every page, be it a small toss as a book is discarded, the WH-TONG of a knockout hammer to the head or SPLUTCH as a monster is cleft in two. It’s just another part of what makes this a real comic-booky read. 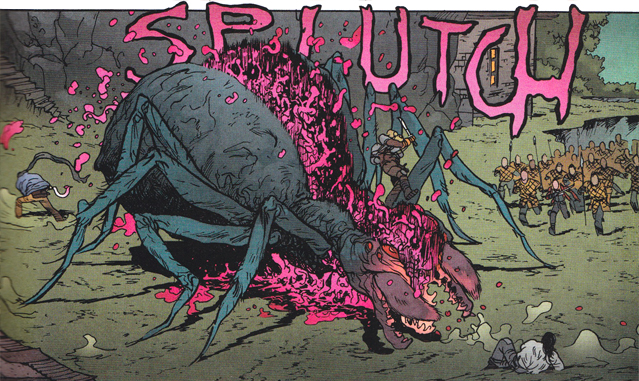 In this book DWJ has built a fantastic world. It appears to be a long distant future of our own, and there are some nice Easter Eggs that show this to be the case. Dan thought it was a labour of love. Just the creator with his excellent colourist Mike Spicer putting together this tight twelve issue story with no fat and a whole lot of unique touches. Jake saw echoes of Mortal Engines with its Steampunk cities. Extremity is definitely a Post Tech world. Despite his usual dislike of giant robots, Jake thought this story earned its use here. The robot is just one combattant in the over-the-top action, joined by flying lizards, battering ram sky ships and other creatures from the depths of legend.

I read the two volumes on full tilt, it is very easy to follow the flow and get caught up in the action. By the time I got half way through the second volume though I was in need of going back and starting again. There is so much good stuff it would be a crime to miss it! Dan was concerned that the ending came around too quickly. He knew the final moments were upon him due to the length of the book but thought there was still much more that could be said. Jake thought there was lots of opportunity for other stories in the same world. Maybe DWJ would return for more spin-offs after his next project. Perhaps a Tales Of… with other creators drawing their own versions under his guidance. 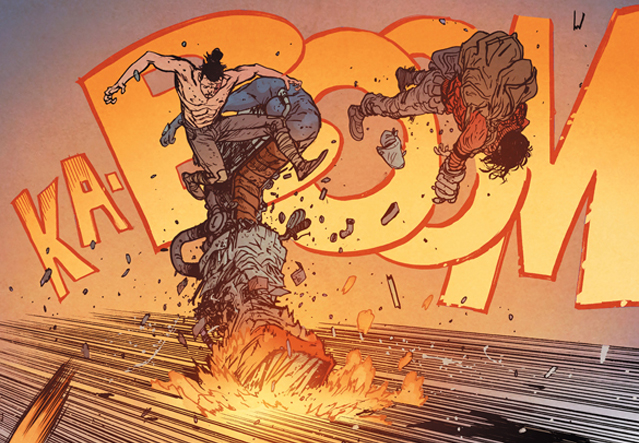 *I am giving this book full marks due to the sheer exhilaration of the read. As a fan of science fiction, coming of age stories and rampaging monsters I can barely fault it. I will be looking immediately to DWJ’s next project: MURDER FALCON!
-Tom ⭐⭐⭐⭐⭐

“This is the definition of what creator books are. Making the thing he wanted to do, all fun, double page spreads, throwing Krull, Star Wars and Game Of Thrones all into the mix. More comics should be like this, just end it when it’s right and do something else. He should be very proud of what he’s made.”
-Dan ⭐⭐⭐⭐⭐

It’s a full-on fantasy thing. I rarely read books a second time but I will in this case, there’s so much to discover. It lacks humour and for that I won’t give it 5 stars but this is not a photocopy of something else, it’s a bunch of indulgence.
-Jake ⭐⭐⭐⭐

Author’s note: While formatting this article it occurred to me I completely forgot to mention the fact we have a female lead here. I tend to gloss over the specifics when I write reviews but wanted to point to this aspect in particular given the number of action heroines appearing in SF today. Thea is a complex character coming into leadership with conflicted turorship from her grieving father, and a brother who appears to be forging his own path. She is a girl whose story is worth following! 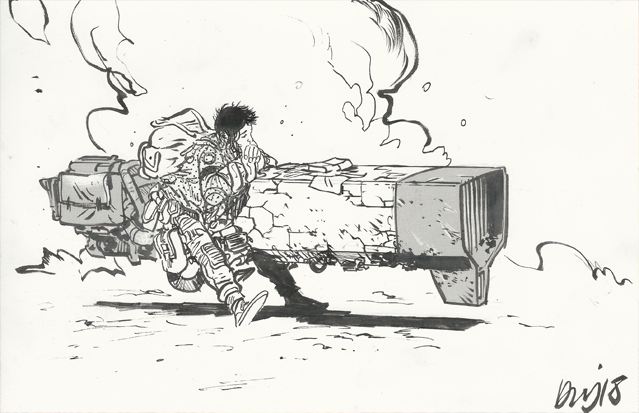