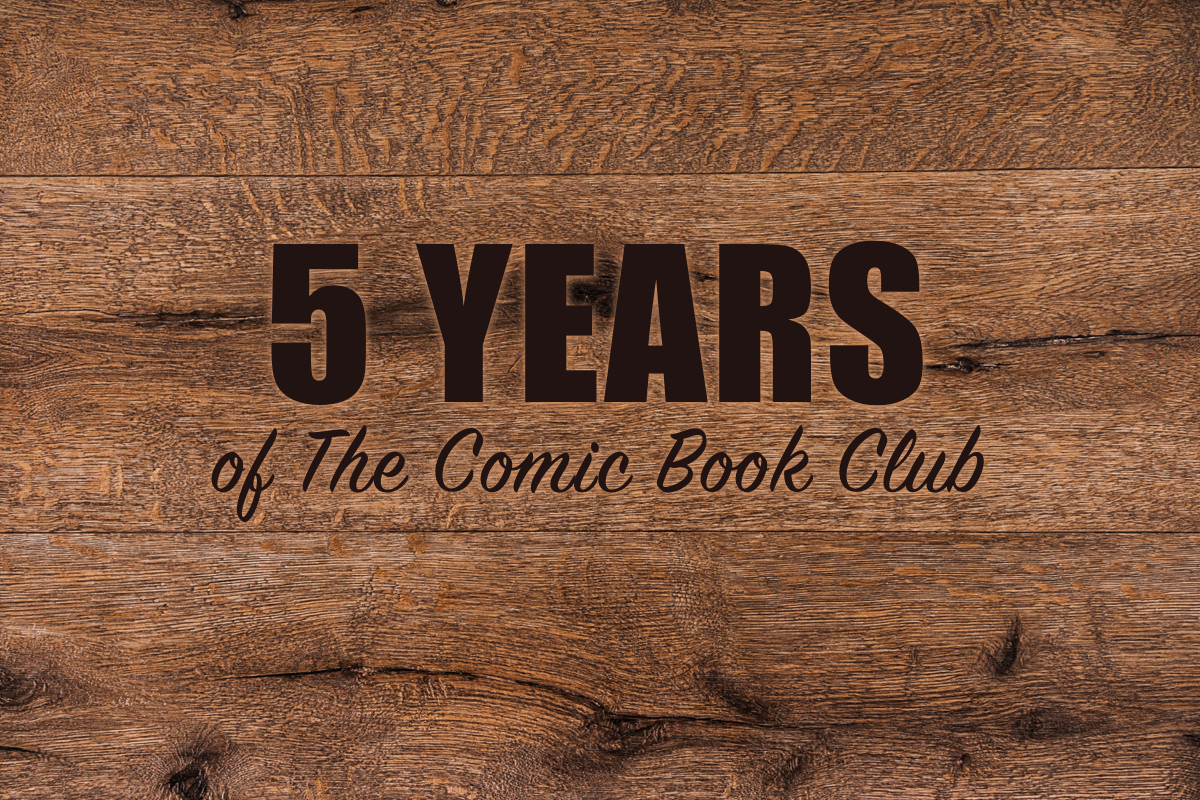 Flippin’ heck! The Comic Book Club has now been going for more than 5 years.

The very first meet-up, at the Castle pub in Bradford-on-Avon, was way back in May 2015. As the founder of the CBC, Kelv picked the book for our inaugural session - Tom Scioli’s Transformers vs GI Joe. It was a bit rubbish but we all loved hanging out in the pub, waxing lyrical about comics.

Thus the CBC was born!

Since then we’ve read more than 50 comic books and covered a diverse range of genres from hard sci-fi, through whimsical fantasy, grotesque horror and sophisticated literary adaptations.

Over the 5 years there’s been a 30% chance Kelv will pick a book featuring Batman. However, looking at 2020 alone that figure rises to 100%! Kelv likes Batman a lot.

Since May 2015 the CBC has met 54 times across 4 different venues, both real and virtual.

As a rule, we try and meet once a month but tend to take a bit of a summer break as schedules become too crammed for us all to be able to agree a date. Being a grown up is hard work.

The original 4 members - Kelv, Tom, Jake & Dan - also comprise 100% of the current club membership. We have achieved precisely 0% growth over the 5 year period. I suspect this is to do with the fact that we’ve made absolutely no effort to expand beyond the original quartet. Small is beautiful and all that!

We score books from 1 - 5. A score of 1 is truly dire and a score of 5 is the best thing ever. We never, ever waver from this robust scoring system. Well, apart from one time…

Dan refused to give an actual score to Daniel Clowes’ Patience as he hated it so very much.

We have full scores for 51 of these books. Those without scores are all Jake’s - he’s lost one of his notebooks with scores. Personally, I suspect a cover-up…

The ‘lost’ Jake books are:

With this in mind all stats in this post are based solely on the scores we have available. The missing books have been given 0 (0%) for the sake of completeness. If we locate the scores for the missing books we’ll update the post with the revised figures. The 0’s for 3 of Jake’s books does mean that some of his average scores are slightly lower than they might actually be.

Author’s note: I’m not a statistician or a mathematician. Don’t expect deep, meaningful insight from these figures or assume they are entirely correct!

If you want the raw data then please feel free to Download the CSV and assemble some figures of your own.

The scores on the doors

The average point score for each CBC member is calculated by dividing the total of all scores given to them by the total number of books they have picked or read.

So what can we take from those numbers?

Kelv’s the most positive reviewer of the bunch, handing out 3pt+ average scores to everyone!

Tom is also a generous marker and he’s particularly fond of his own picks, scoring them an average of 3.7pts out of 5. Tom also scores Kelv over the 3pt threshold but his average scores for Jake and Dan dip down into the 2’s.

Jake and Dan are a bit more circumspect on the subject of self-worth, scoring their own books an average of 2.5pts and 2.8pts respectively.

Dan and Jake consistently review each other’s books badly, whereas Tom and Kelv score each other fairly well across the board.

Dan dislikes pretty much everything, including books he picked himself. He only gave his choices an average of 2.8pts over the years. He wasn’t massively kinder to most of the other CBC members although Tom is Dan’s ‘favourite’ scraping a 3pt average.

Tom’s top of the fivers list having given top marks 6 times out of 54 books. That’s an 11% chance of high praise from him.

Jake and Dan have both issued 3 ‘5-star’ reviews. Kelv has given 2.

The best of the bunch

The top two books are pretty clear cut - Daniel Warren’s amazing Extremity garnered a 93% approval and the Encyclopaedia of Early Earth was close behind on 90%. Two very different books but both utterly deserving of their high scores.

If you haven’t read any of these then we’d heartily encourage you to do so. We may not have all agreed on their brilliance but you can be certain that at least 3 of us thought they rocked.

Who picked the most ‘good’ books in the top 5?

The remaining duffers are pretty evenly spread between CBC members. The second worst reviewed book was one of Jake’s - Square Eyes with a measly 33%. After that we have one of Kelv’s bat-picks - Batman: the doom that came to Gotham. That made a paltry 35%.

Other books that we’d recommend you give a big fat miss to are:

Overall, Dan and Jake have had the most ‘bad’ books, both picking 3 that scored less than 50%. Kelv and Tom fare slightly better having only chosen 2 books we all thought were rubbish.

Congrats on having semblance of good taste lads!