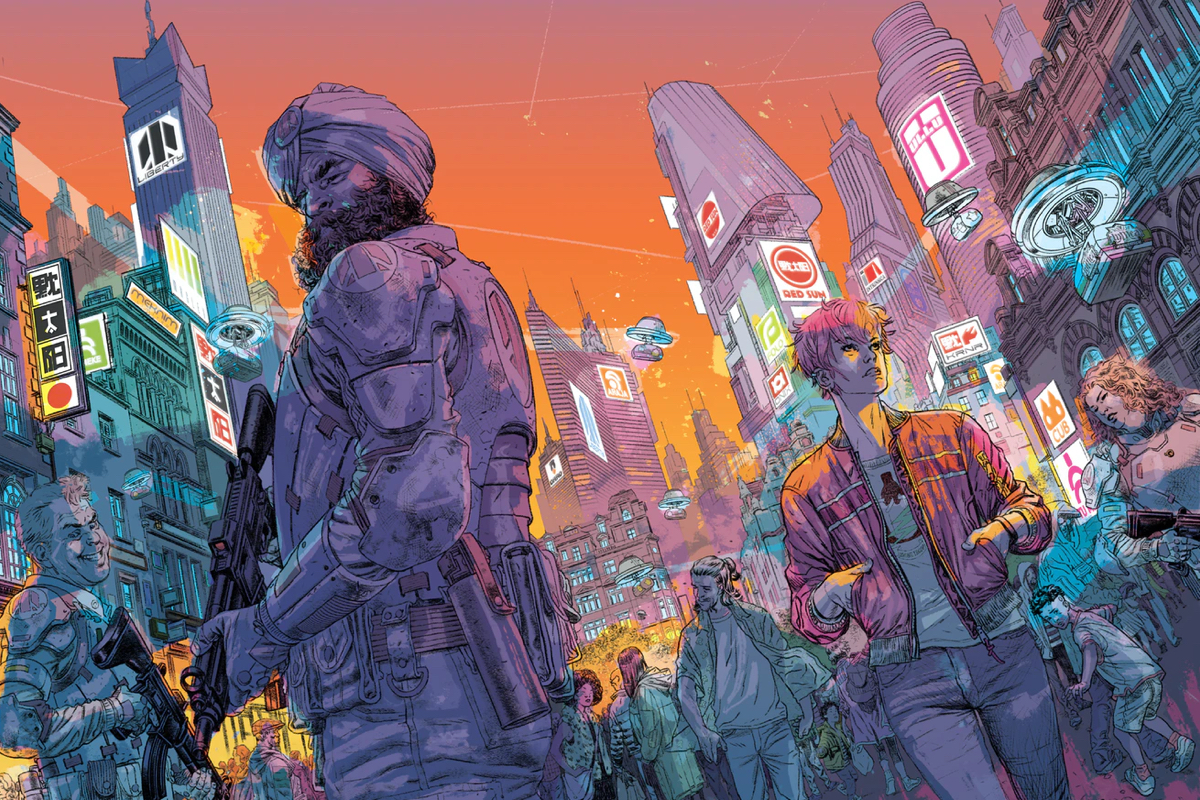 Are comics better than movies? How many artists is too many? Is oversized the right size?

The June edition of The Comic Book Club are here to answer these pressing questions. This month we have all been reading Duncan Jones’ sci-fi fable, Madi.

Let’s get into it!

There are a fair few different versions of Madi available. Tom was in early on the Madi Kickstarter campaign and got a very nice oversized hardback for his trouble. The rest of us picked up the less-snazzy and far more normal-size trade paperback. Tom’s deluxe hardback definitely has the Wow! factor and make our standard versions feel a bit… dowdy in comparison.

On a material level at least Tom was pretty pleased with his Kickstarter reward. The Kickstarter was a success and the the final product arrived only a little later than scheduled. Apparently Tom had feared the worst after being let down by the non-arrival of a Great Big Hawaiian Dick from a previously-backed KS project.

The book of the film

According to the blurb on Z2 comics, Madi’s publisher, the book is “the third and final story in the ‘Mooniverse,’ an anthology of independent stories that take place in a shared future.”. While we’d all agree that it shares common themes, styling and tone with both Moon and Mute none of us spotted any direct links or references beyond a few possible background easter-eggs. That doesn’t mean they’re not there though.

I think that, on some subconcious level at least, we were all wondering why Madi was a comic book and not the third movie in a trilogy. More often than not reading Madi certainly felt like working through an illustrated adaptation of an early-draft movie script. 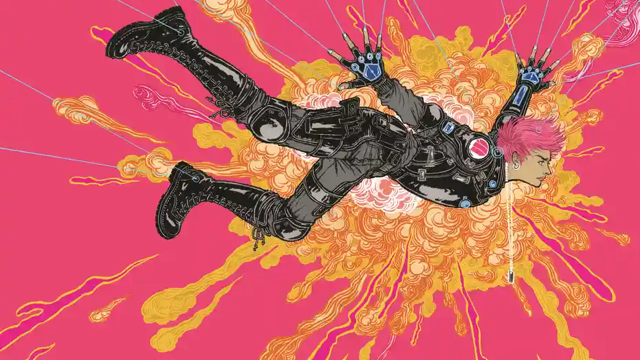 Kelv saw the whole thing as a storyboard, with sparse, snappy dialog dotted across pages and clearly intended to be spoken not read. Tom commented on the cinematic wide shots dotted throughout the book, used cinematically to establish new locations and deliver a blast of visual spectacle.

Meanwhile, Paul noted Madi’s script-like qualities as the story moves through its three act structure, punctuated with showpiece action scenes. He also mentioned the huge array of characters, most of whom would’ve warranted but a few seconds of screen time in a 2 hour movie. Placing them on the page seems to elevate their importance and meant Paul spent a lot of his time trying to keep track of them all.

I can only agree with everyone here. Many of the sequences in Madi have a kinetic, filmic quality to them. They feel like they were intended to play out on screen rather than on paper. Once you notice it, it becomes difficult to shake off. At worst it’s kinda distracting…

One of the most interesting things about Madi is how the artist switches every 6-10 pages or so. This very quickly becomes quite challenging to read as each new sequence lurches into a radically different art style from the last. Although there’s a broad sense of consistency in character design the wildly-varying art styles still make for oddities and non-descript faces, especially among the huge cast of ‘secondary’ characters.

Naturally, given the wide and varied tastes among CBC members, we all gravitated towards different artists. I was a fan of the strong opening section set in a future Camden Lock by Dylan Teague. It felt very Euro, like a feature strip from Heavy Metal. Kelv wasn’t so keen but could still appreciate the detail in Teague’s artwork. 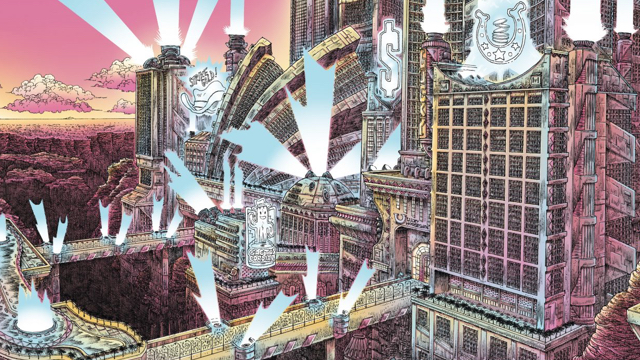 Jake wasn’t familiar with a lot of the artists but did recognise those with a strong 2000ad connection, primarily Glenn Fabry and Simon Bisley. He wasn’t too fond of the chopping and changing styles, finding it a distraction from the narrative.

Kelv pointed out that, due to the size of the book, it would’ve been a gargantuan undertaking for a single artist to complete. Perhaps the mix’n’match approach was dictated more by the need for a timely delivery than an intentional artistic direction? 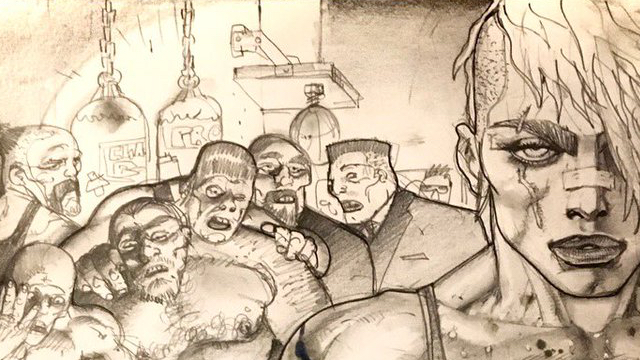 The one thing we could all agree on. art-wise, was that a fight sequence illustrated by Bisley was really disappointing.

Once upon a time… in the future

Overall Madi is a big ol’ mish-mash of ideas pulled in from numerous classic sci-fi, cyberpunk and horror sources.

As far as I can tell, the plotting and story is by Duncan Jones. Well-regarded comics scribe Alex De Campi providing the finishing touches.

At the time of reading only Kelv had seen both Moon and Mute. Everyone had seen Moon and were unanimous in our appreciation of a bona fide slowburn sci-fi classic. 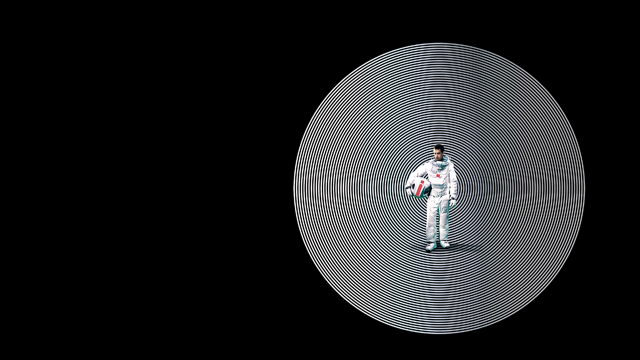 Kelv hadn’t really gelled with Mute and so was a bit worried how he’d feel about another story set in the ‘Mooniverse’. As mentioned above, the first few pages didn’t grab him but, once past those, he felt Madi found it’s groove and he blitzed through the rest.

Jake thought it somehow worked as a strangely grounded near-future sci-fi fable in the vein of 90s 2000ad spin-off Crisis.

Ironically the script-like qualities made it an easy read as there’s minimal dialog and limited exposition. Somehow it does also manage to meander as well, despite being propelled forwards by the aforementioned big-time action sequences.

The denouement featuring repeated body-swapping and personality switching was pretty exciting and delivers a pretty decent pay-off, especially for one of the supporting characters who gets his well-deserved time in the spotlight.

As a not-that-original mashup of many, many different influences I think I can say that we all liked Madi but didn’t exactly love it.

As a hefty graphic novel it’s a fast read despite it’s size, and is chock-full of interesting imagery and exciting action sequences. Due to the wide array of artists, and a story that just feels shaped and structured to appear on the big screen, Madi can’t help but feel like a bit of chimera.

Jake and Tom are planning a re-read. Kelv and Paul probably won’t. I suspect I’ll just flick through and look at the best bits.