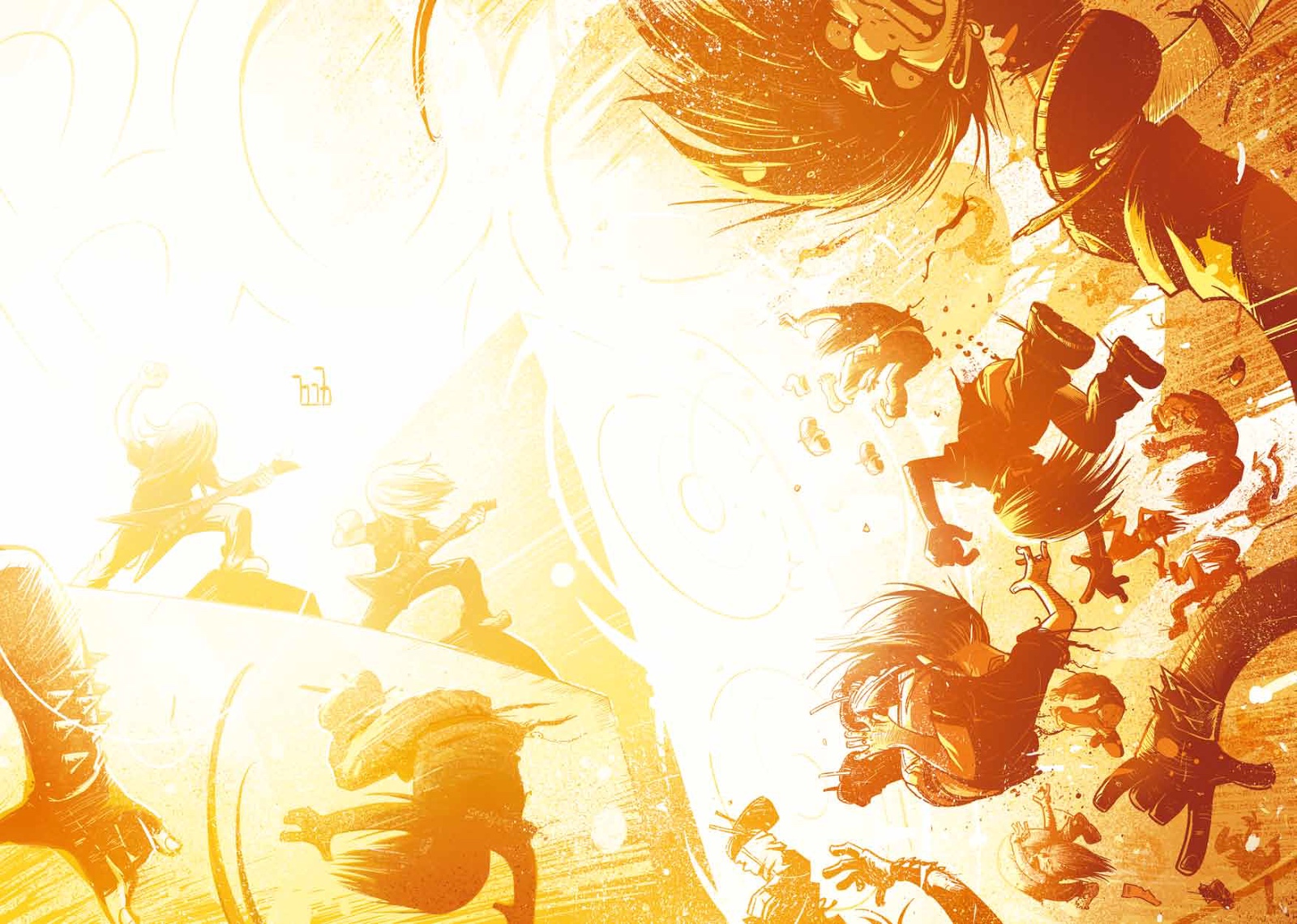 With a face melting power chord, our first year of comicbooks is wrapped up by Sing No Evil (or Perkeros to give its original name), a Finnish OGN by creators JP Ahonen & KP Alare. This story of a metal group’s attempt to make it in a battle-of-the-bands scenario divided our members once more and showed how our personal experiences and tastes have a significant impact on what we like to read.

I discovered Ahonen during Inktober (the annual October drawing challenge begun a few years ago by Jake Parker). He had drawn chibi Metalhead comic strips and I loved them so much I had to see what else he had done. When I realised he had a wealth of comic art under his belt I immediately ordered the only one in the English language and it then waited over half a year for my next turn at picking. 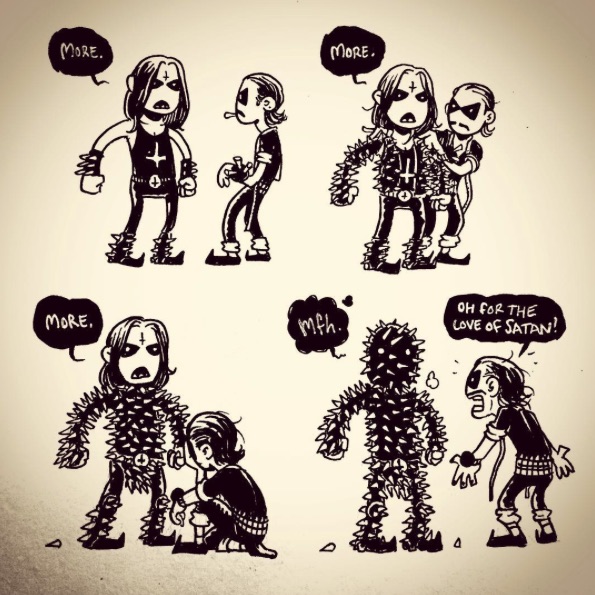 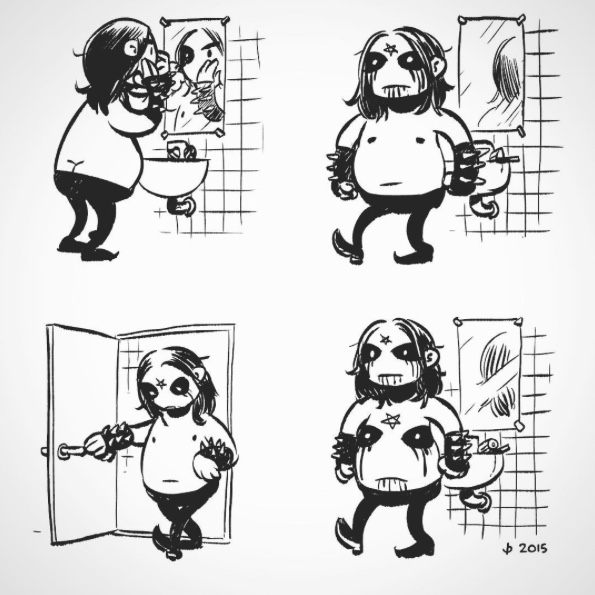 The book begins with a terrific gig scene, an explosion of metal you can feel through the pages. Dan was transfixed and transported- like a mad teeth-gritted five-day speed fix, sweating in the moshpit of a Birmingham club. He said to him the book was everything Hip-Hop Family tree had been to Jake.

Sadly, the rest of us felt spoilt by the opening. Jake thought the band Perkeros were likely crap musicians and had no charm. The main storyline was over-familiar and he said he would have preferred it if the book had no words at all.

I would almost agree with that myself; Ahonen’s art was the main draw for me, I think he is a world-class talent. Each of the characters are unique and the world is expertly realised; albeit it’s a world where we have a bear and a badger as drummers. We all would have loved to see more animals! Bear was a standout character, being not anthropomorphised as such but simply a bear with a desire to rock out! We also liked Lily (who was handled better than the one-dimensional girlfriend), but the guru Kervinen wasn’t as profound as he thought he was, he was just annoying. New addition to the band Aydin was a very cool character, he quips at one point “you see worse on Kebab lines at 4am”. 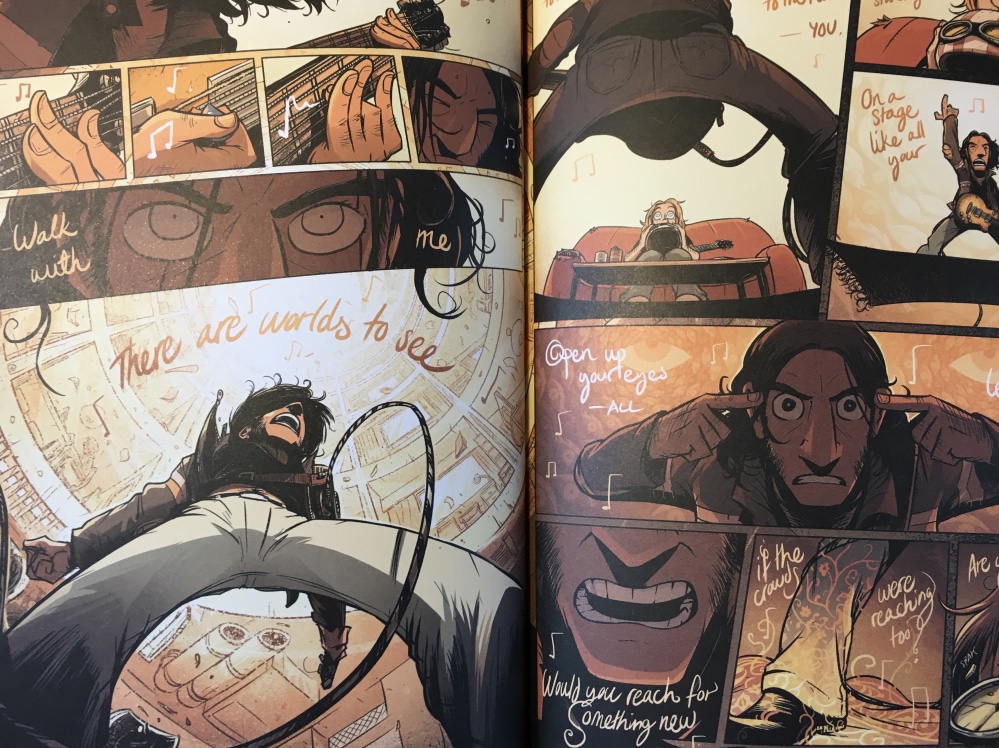 The colours throughout are predominantly warm brown hues with accents of green (barring one tiny section towards the end). I liked the palette but Kelvin found it a dirge consistent with his opinion of the book as a whole. He felt he was “doing a Dan” by having an extremely negative reaction to the book (HATED IT!). He blamed it on his own youth as a raver not a goth and found the story and music pretentious. He wasn’t the only one to draw comparisons to Scott Pilgrim, another comic that mixes the story of a band with coming of age/self awareness and fantasy elements. But Kelvin said he was always able to forgive the Pilgrim character for his dickisness whereas Perkeros’ Aksel’s own self-loathing and destructive tendencies just painted him as an irredeemable twat. 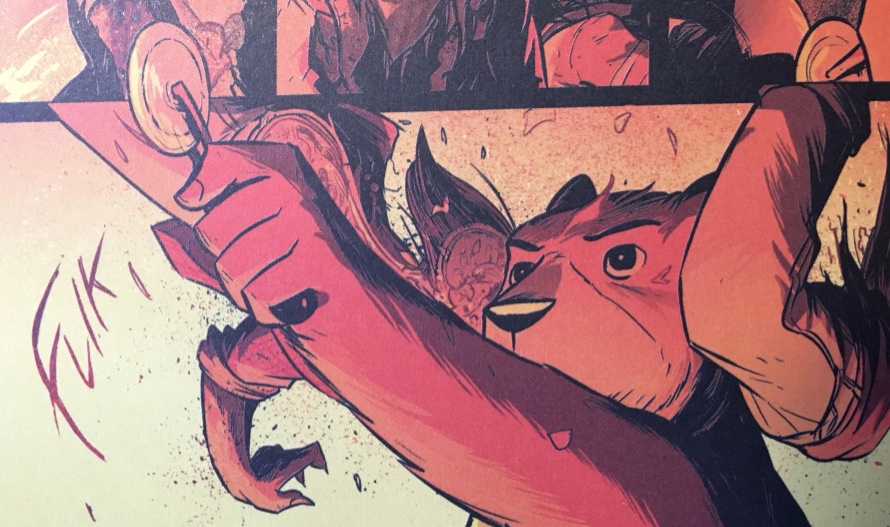 The book does feature some fantasy elements throughout and significantly changes gear in the last chapter, however I felt it did not earn the change in tone; that the build-up had been too thinly seeded. I understand the desire to shock and surprise but it just didn’t quite sit right for me. That said, the action itself was handled masterfully with wonderful touches like a pizza cutter as a melee weapon and some amazingly well choreographed punches. With all of Kelvin’s complaining, he had to give it up to Ahonen for the accuracy seen in the fight. Blocks, bodyslams and stabs. But then it all fizzles out again.

Overall, I feel this is a great looking little book, let down by a tired concept that then isn’t lifted enough by its twist. However, I am certainly going to look out for whatever the authors do next.

I acknowledge its flaws but it really hit home for me

Great gigs, awful title. It was a Super-Cliché

It is my anathema. Neughhhhh! Bored.