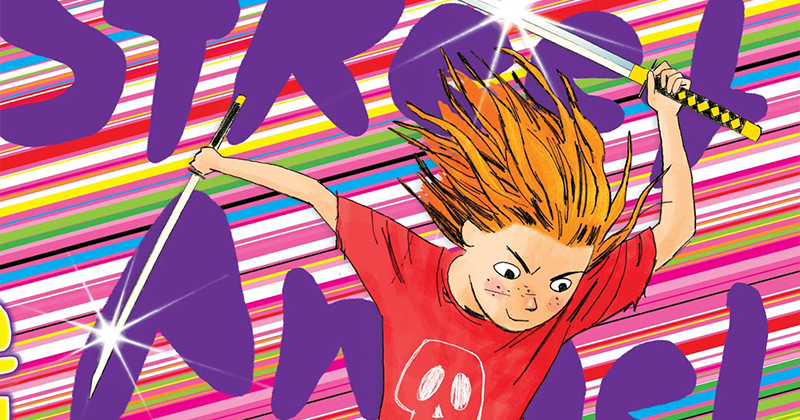 Sometimes choosing a book for CBC is as simple as paying attention to your friends:

Been reading this comic this weekend. Just saw it randomly in a bookshop window display on instagram. Zoomed into this all like ‘what is this perfect comic for Dani!?’ It is SO COOL and wall to wall bad ass girls. it’s by @jimruggart off’ve CartoonistKayfabe! Totally recommend!

Yup, I’m that lazy. Actually, I’d heard of Street Angel before. Back in the depths of time I had much more commuter bandwidth to listen to podcasts and often Jim Rugg’s work would come up.

This particular book is a chunky collection of the later Street Angel strips, mostly put out by Image Comics, and they stand apart from her 2005 debut due to the colour and mix of art styles. When Rugg and Maruca’s Homeless Ninja was first on the stands it was a small press floppy on pink paper. Back then, it stood out compared to the wall of superheroes. Now pink is often the go-to colour for minicomics.

The mix of styles is a blessing and a curse. Opening the book Dan was excited by the appearance of a bandana wearing cat, only for this immediately to be followed by a very cartoony dog. That pretty much did it for him. Jake pointed out one of the dog’s last panels was as deep as it’s likely to get for a cartoon dog: stood in the shower with the water beatind down, trying to wash away his experiences with the Street Angel. Regardless, from this moment on Dan was not going to like the book!

The rest of us enjoyed the strips a lot more. Each story has something different going on, resolving in and around Wilksboro (the world of Street Angel) while she herself remains a constant: she’s homeless; she’s hungry; she’ll kick your ass. I compared her to a character in a British humour title, like The Beano or The Dandy. She doesn’t change, her personaliy remains the same. She has an adventure and then it ends. Repeat. This is in no way a bad thing, in fact Kelvin loved being able to pick it up and flick through to wherever, still enjoying the story without worrying about over-complex plots. Throughout the book there are people who know who she is, and they know much better to stay out of her way than the poor saps who feel the end of her blades. 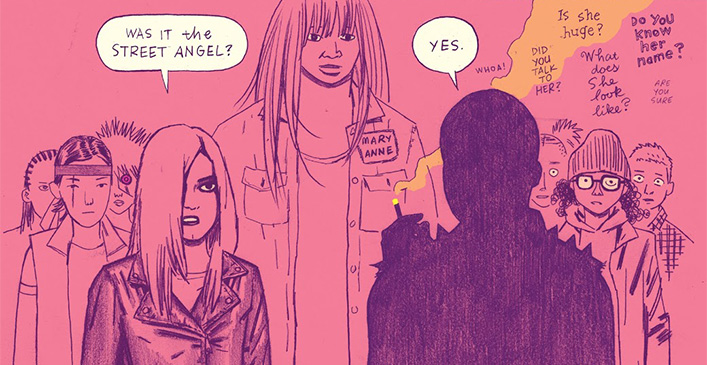 Rugg shows off his expert design skills in the book too. In 2015 he won the Best Publication Design Eisner Award for Little Nemo: Dream Another Dream. Here he has an inventive flair for page layout, FX typography and action. I personally love the pages where he draws Jesse (her real name) with multiple fists or swords or arms, fighting, stabbing or eating in a flurry of motion. My very favourite though is one page-turn where the facing page, which you see first but is technically second shows only a fist, and then your eyes follow the action to the other side where she punches Some Guy. You’ll have to buy it to see what I mean! 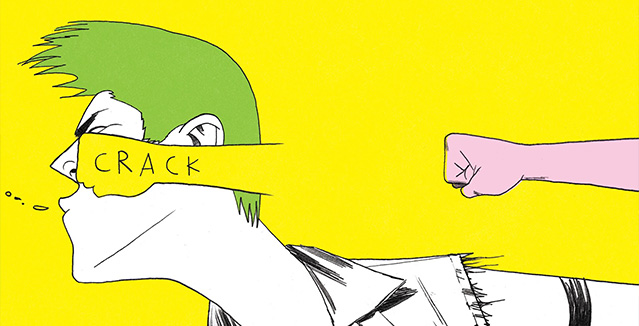 This book does require an appreciation of Underground comics in order to get on with it (see Dan’s reaction) and the first volume even more so. But maybe this book is also a way into that material for the uninitiated. I disliked the Bleeders story the first time but it grew on me the second read. Maybe I was in the right mood, or maybe the strip had just clicked with me by then. Jake said something similar; he learnt not to overthink it.

It has some genius moments, and as Kalvin found you can pick it up and leaf through at leisure. It’s almost a coffee table comic, like a collection of Beano strips or the other things that Rebellion have started putting out.

One other thing I noticed is that bad language is missing throughout. The flow of the dialogue is not modified but the swears are special-character replacements. This may well make it more suitable for the teenage readers that it surely will appeal to, at least from the point of view of a parent! This is the audiance I think would enjoy it most: teenage reader just dipping their toes into Underground graphic storytelling.

We found the classificaion of the back “Teen, Girls and Women” to be a little limiting, but given Dani’s reaction that got me to buy it in the first place, it could well be on the money.

I really don’t get it! Couldn’t discern an actual story. Did anything happen? It felt like being shouted at by my teenage daughter.
-Dan ⭐ (for the cat)

Asian myths have hobos who are zen and can fuck you up! This feels like a cartoon - it’s candy pop escapism and I love it!.
-Kelvin ⭐⭐⭐⭐⭐