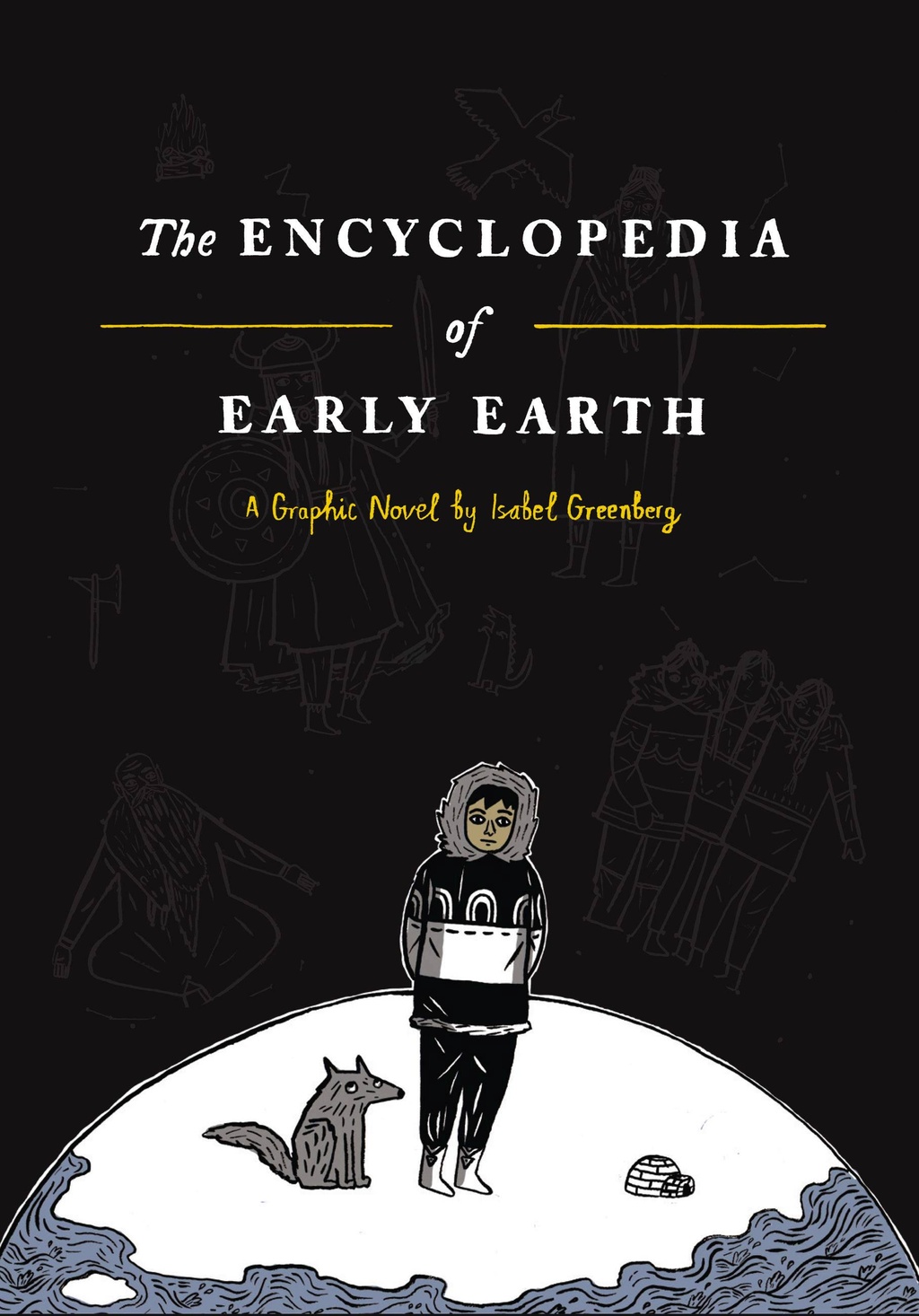 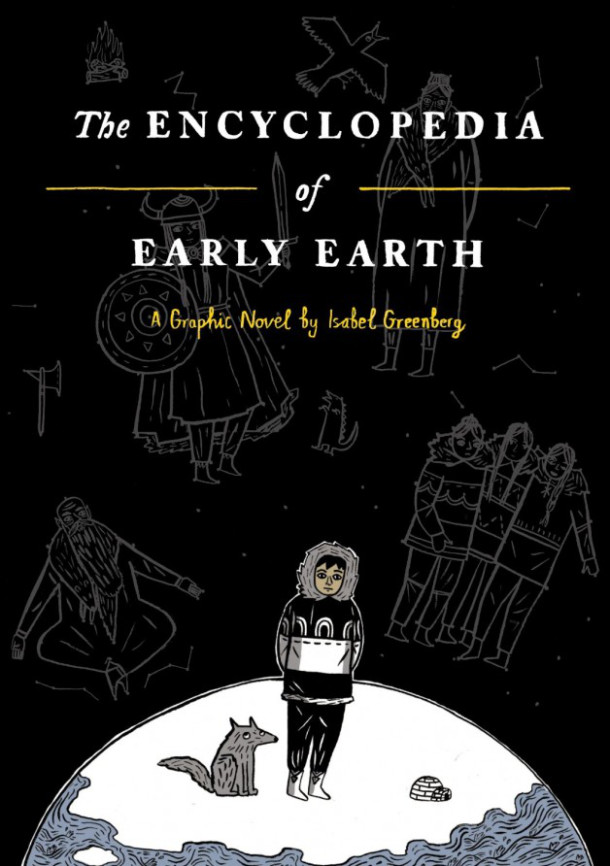 The Encyclopedia of Early Earth comes with the disclaimer, ‘READERS! THIS BOOK IS NOT A REAL ENCYLOPEDIA’. I point out that neither is it a book about early earth. And it’s all the better for it. 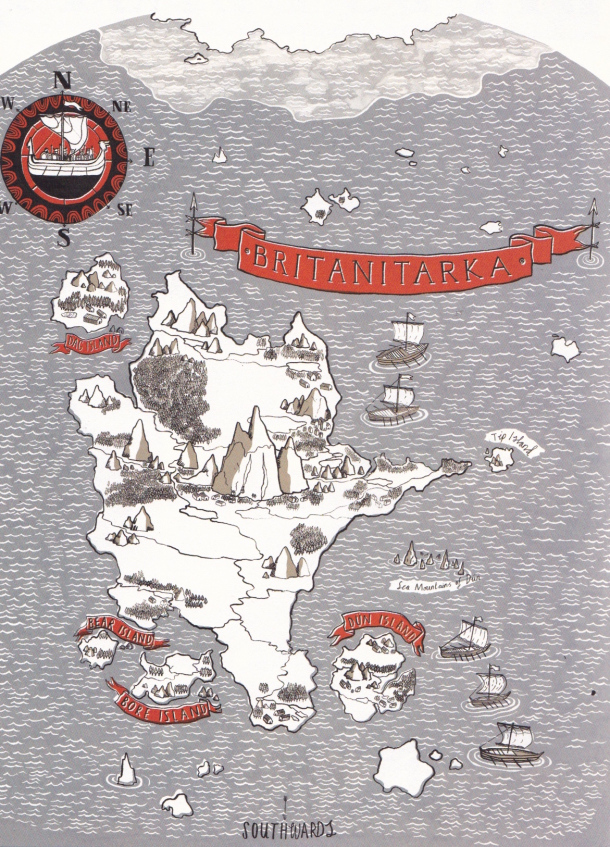 It is about an early earth however, one assembled from various mythologies, epic poems and folk tales and featuring a pantheon of bird gods invented by author Isabel Greenberg. She incorporates well known stories, like Noah’s flood and the voyages of Odysseus and retells them with wit and verve. 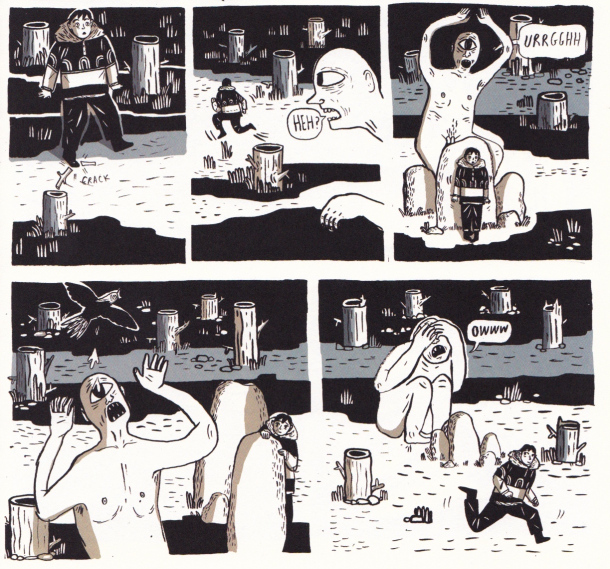 This is a book all about stories – our hero, a young man from the Nord lands is a storyteller, travelling the world and exchanging tales with other cultures, more often than not as a way of getting out of scrapes. It’s all framed by a beautiful story that explains how our hero from the north meets and falls in love with a woman from the south pole. But they can never truly come together due to a quirk in the earth’s magnetic field that keeps them several feet apart until their dying day. 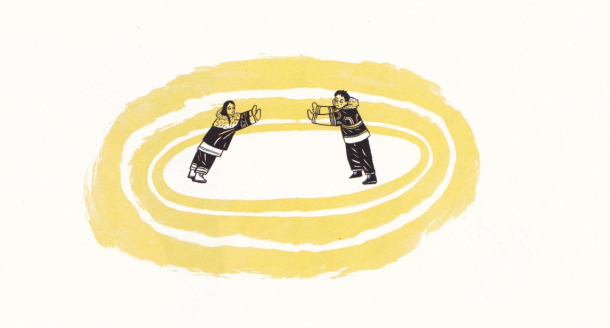 Experiencing the Encyclopedia wasn’t like reading a linear book, it felt more like handling a three dimensional object to be turned over in your hands, and explored as you might a globe; travelling from north to south, stopping at points along the way and spinning off on unexpected tangents. 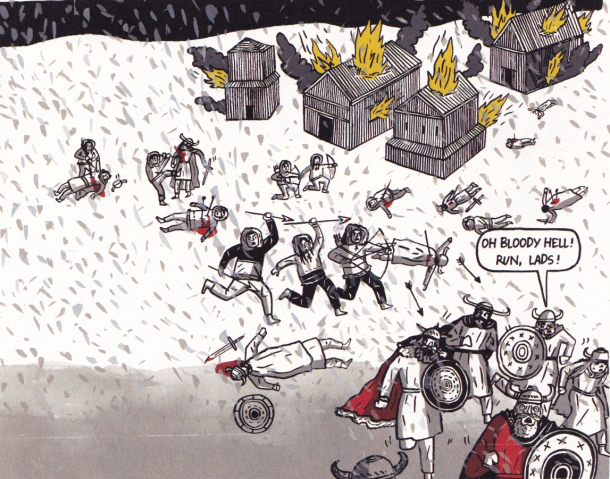 I loved this book as did Tom and Kelv, appreciating its construction, lightness of tone and humour – particularly the skillful way Greenberg puts modern language in the mouths of gods and ancients without breaking the spell. Not an easy task we all agreed. 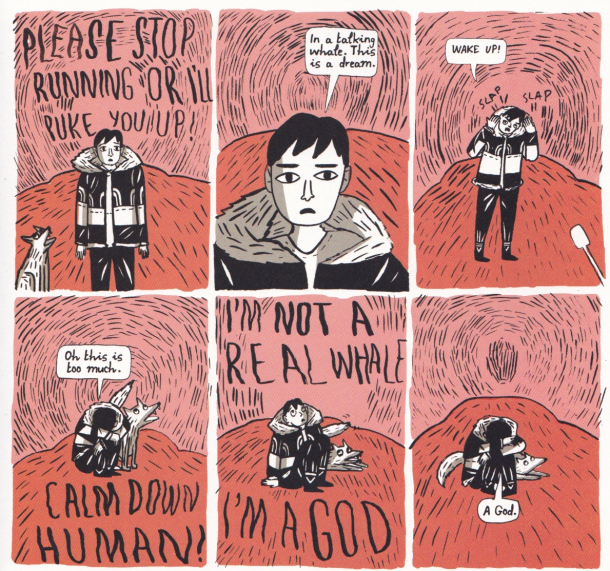 Actually we didn’t all agree. Dan, although he ‘didn’t want to burn it,’ found reading the Encyclopedia like ‘eating a bag of marshmallows’. The colloquialisms particularly grated, pulling him out of the story. He conceded that a lot of skill and attention had gone into the book, but felt it didn’t hold together as a piece of sequential storytelling and wondered if it might have worked better broken into smaller chunks. However the rest of us found the experience entirely satisfying – despite the size of the Encyclopedia we all read the book in a couple of sittings.

For Tom the stand out characters were the gods: Birdman (‘Top Cat, King and Cosmic Architect’) and his children, the Ravens Kid and Kiddo. In one of the book’s most most ambitious stories – a retelling of the book of Genesis – we learn how Kiddo creates early earth in her hair, before Kid spitefully cuts it off, leaving the world to grow out of control. 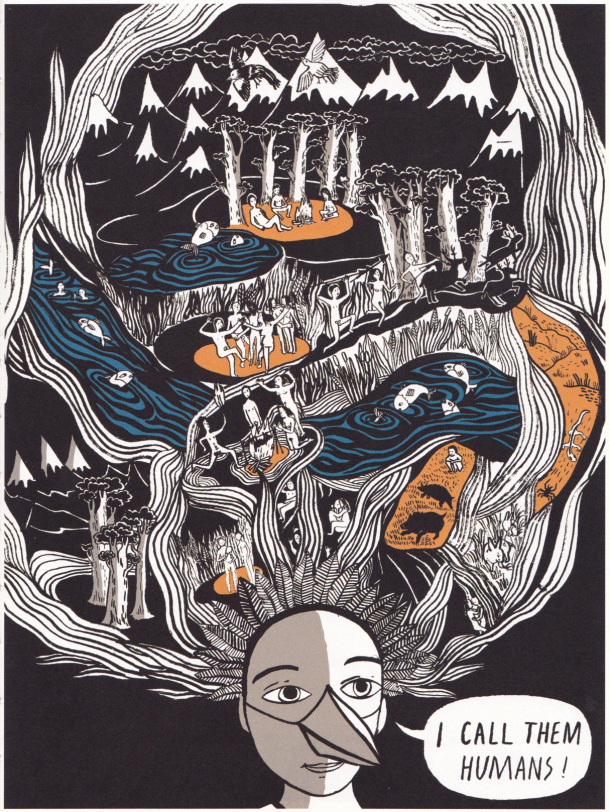 The Genesis story also takes in a retelling of Noah’s flood with Greenberg integrating the story of the Raven gods and their father into the familiar biblical narrative. This was Kelv’s favourite moment as he found the bickering siblings particularly satisfying and their acts of rebellion against Birdman quite poignant. Kelv also highlighted another memorable character: the Great Dag. 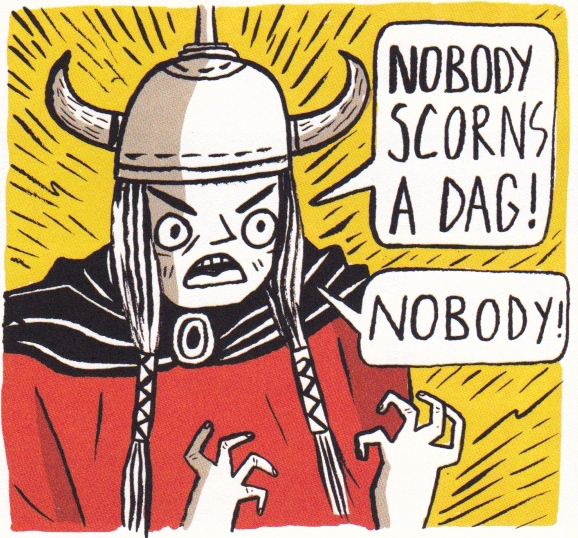 She is the ruler of a tribe of very angry warriors and prone to furious outbursts. I was even more taken with her great grandmother the tough Old Crone, teller of one of the best stories in the Encyclopedia (which even Dan enjoyed), in which we learn how to tackle man-eating giants with sausage. 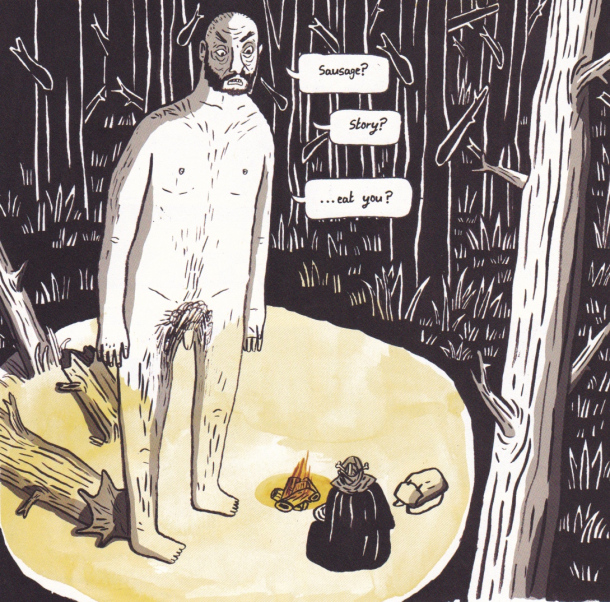 My pick was the section set in Migdal Bavel, an island city with pretensions of being a great civilisation. Here the Storyteller encounters a self-important map maker and his team of Genius monkeys from the island of What. In one of the book’s best comic moments we learn how he maps the world by sending these ‘hundred percent reliable’ monkeys away in ‘little pedalo boats with a sachet of paper and pens and jam jars’ to help him measure distances and map early earth. 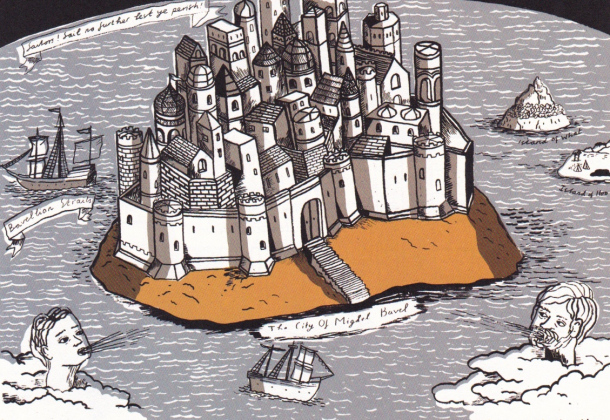 We all gave the Encyclopedia five stars, apart from Dan who scored it a three, making it the Comic Book Club’s highest scoring comic so far! Greenberg has recently published a sequel, The One Hundred Nights of Hero, which looks equally exquisite and continues in the same vein of what Page45 calls a ‘seamlessly stitched-together sequence of tales.’ It is bigger, brighter and next in my pile of comic books. 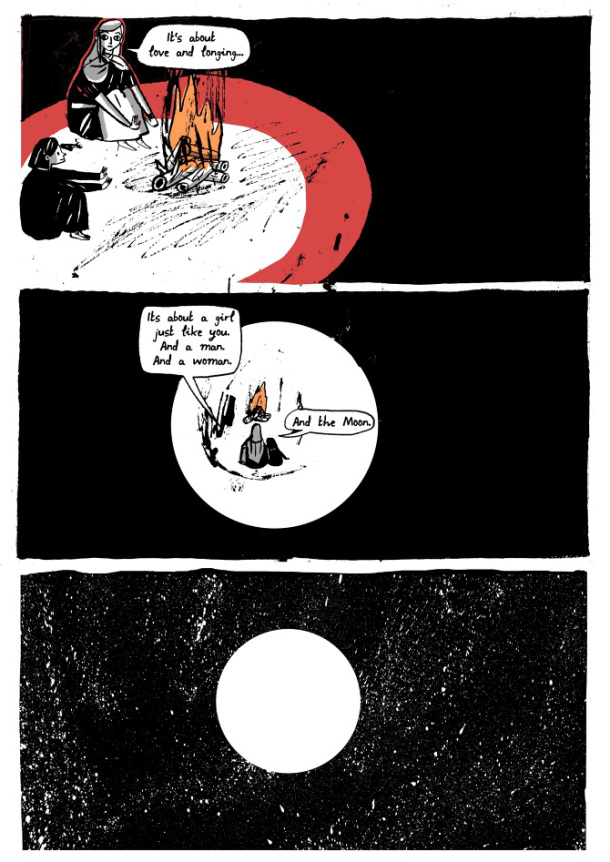 The Encyclopedia of Early Earth is published by Jonathan Cape.