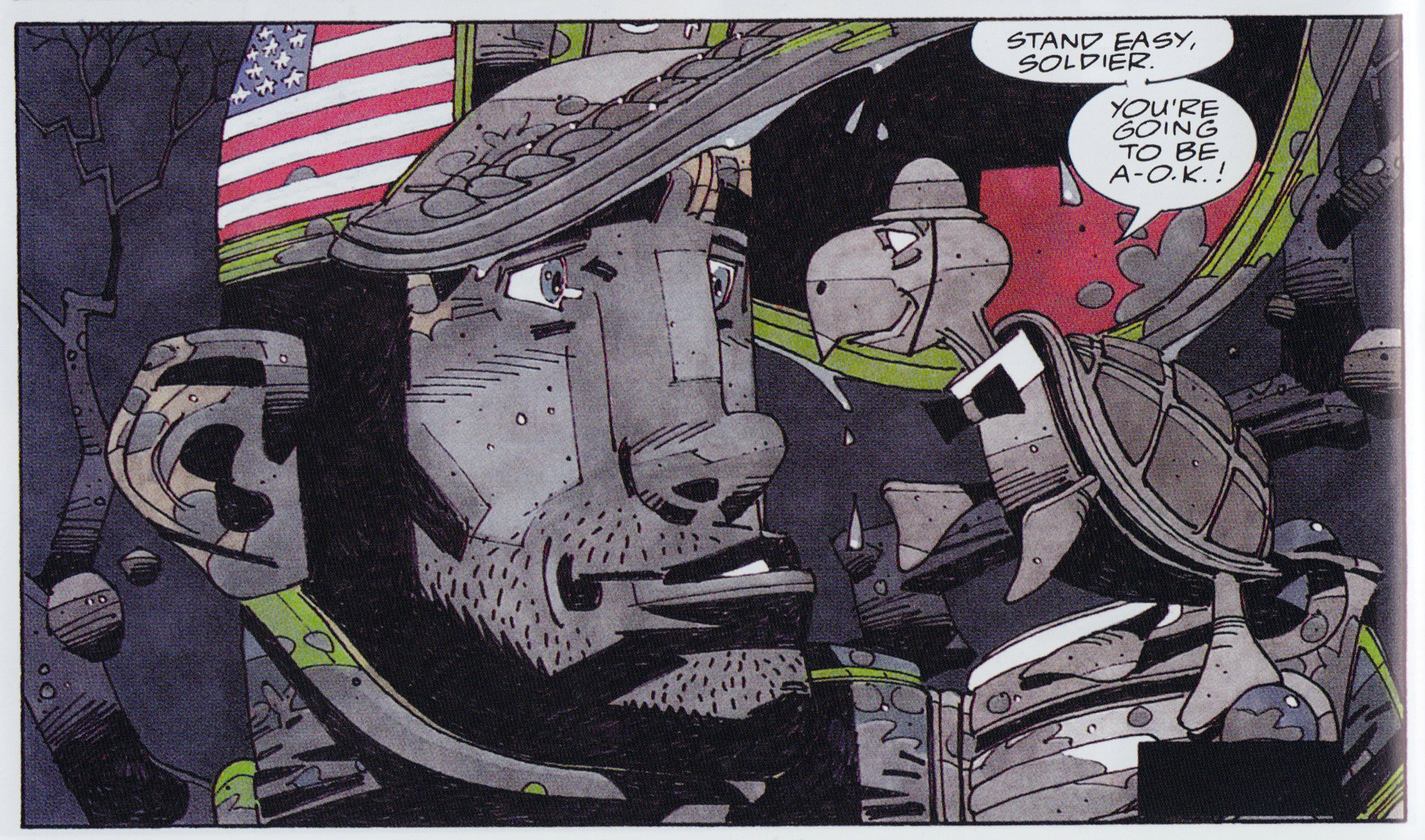 This book was all about expectations. I had been waiting to read it since 1991 when I was exposed to a single panel in an advert for Marvel UK’s short lived Meltdown comic on the back cover of Transformers. The UK newstand was brimming with anthologies at the time (see Deadline, Revolver, Crisis etc) and Marvel UK decided to put out a book containing mature themed reprints from their US cousin Epic’s line. Sadly I never saw the actual comic (though today eBay provides) and always wondered what the story was about! 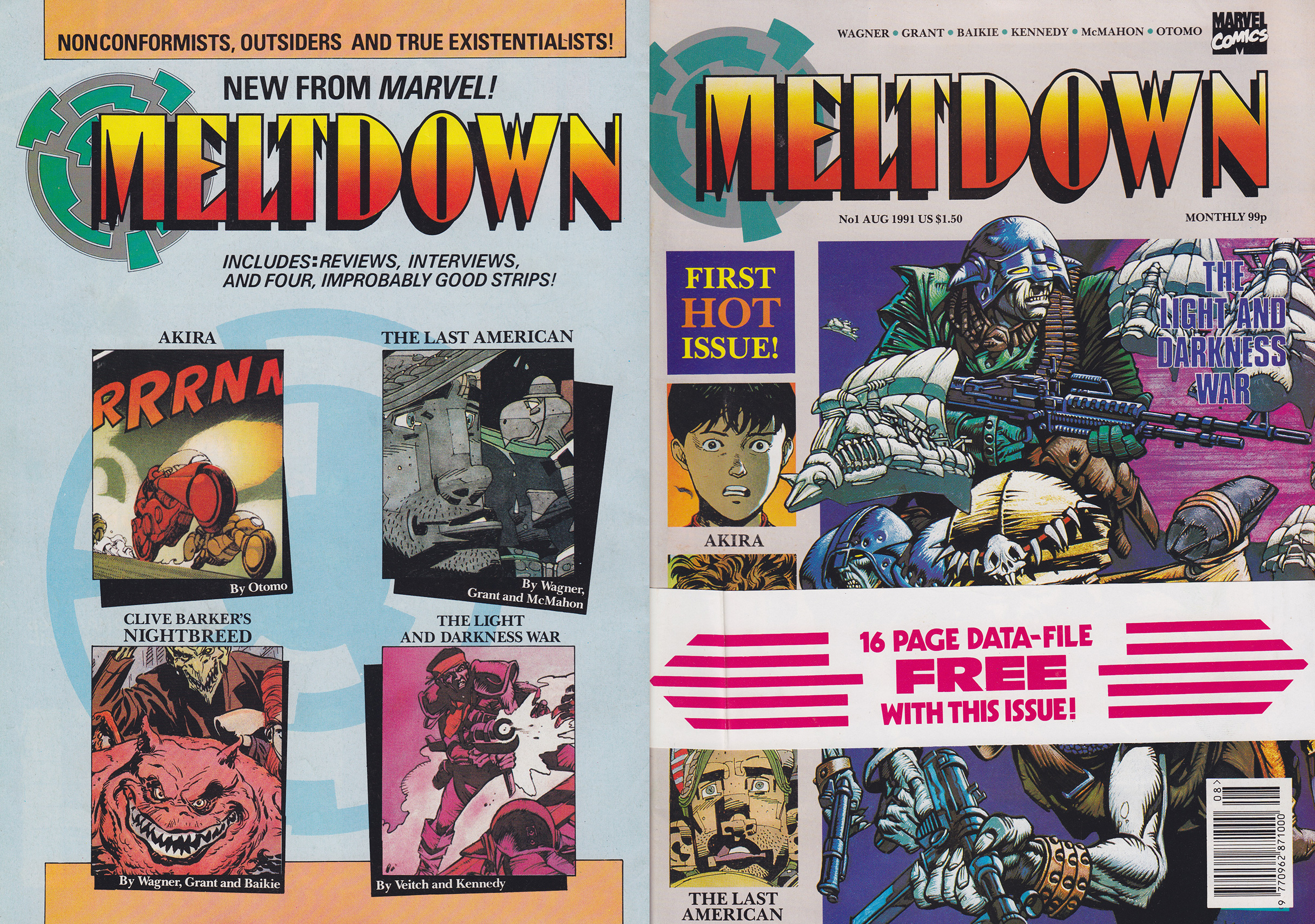 The others also had expectations: Dan was keen to revisit having read the Epic issues in his youth, and Jake & Kelvin had opposite thoughts: one hoping to see echoes of Marshall Law and the other fearing the brutal fascism of Pat Mills & Kevin O’Neill’s book would be present here too.

The four issue story has been reissued by 2000 AD’s publisher Rebellion. Creators John Wagner, Alan Grant and Mick McMahon all hail from the Prog and it seemed like the perfect place for the creator-owned series to now be available, ironic since it originally landed at Epic in the 80s following fallouts with 2000 AD’s then-publisher Fleetway over creator rights.

TLA’s authors were not swept up in the original creator poaching by DC Comics editors, perhaps due to their work having less of the literary affectations that attracted Berger and co to Alan Moore & Neil Gaiman, but they had a US in at Epic thanks to a connection with editor Margaret Clark. Clark was even due to help Wagner and co publish their own anthology Toxic!, but this didn’t happen and that title floundered without an editor, lasting less than a year.

TLA is certainly feels a book of its time, with its Nucleomituphobia and an appearance by Ronald Reagan. That is, it was a book of the eighties. Sadly the book did not come out until 1990 due to McMahon’s ill health; it took him up to six years to complete the four issues. But regardless his work is stunning. Created with fineliners and marker pens, the red skies, green tech and purple scenery create an oppressive view for this post-apocalyptic future. 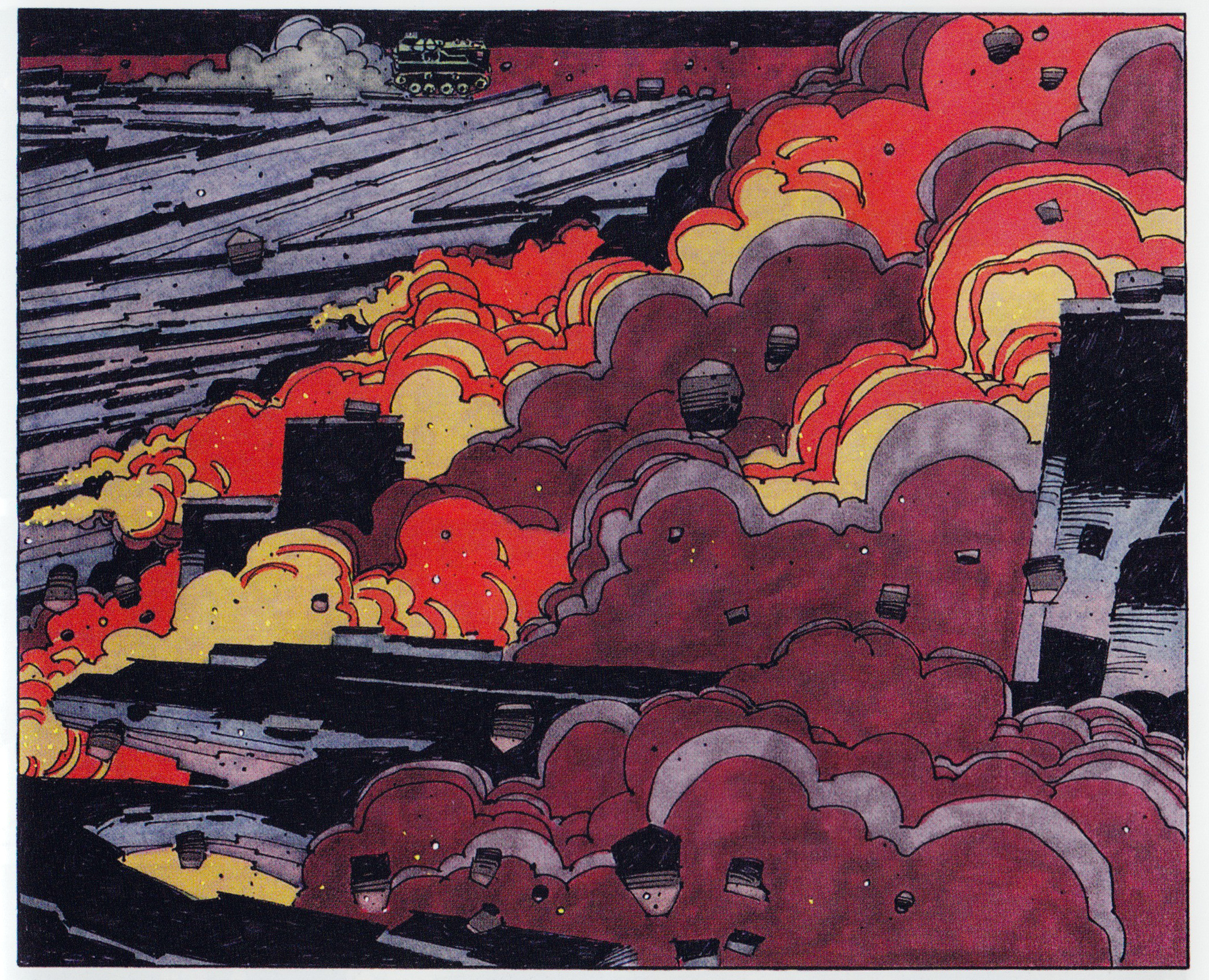 The consistancy of the work appeals to me immensely; I had been a fan of McMahon’s since his early Judge Dredd days but it required me to grow up to appreciate his evolving style. Dan also loved the art, he sees no mimicry in McMahon’s style and respects how it has grown over the years. Sadly he could not say the same for the story, and he felt the same letdown now he had done originally. For him it was not satisfying.

Kelvin’s main problem with the book was the musical number in issue 2. He cannot stand lyrics in sequential storytelling and feels it is totally the wrong medium. Jake wasn’t so bothered by that section: he was happy reading through the lyrics, though he couldn’t place the song and thought it a touch self indulgent.

Jake enjoyed the robot sidekicks, they were fun although not as fun as they could be. He didn’t think the writers had quite pulled it off. Dan pointed out the film Silent Running as a place where this had been more successful, I thought of the skutters in Red Dwarf and Kelvin pointed to the film Black Hole’s robot companions. 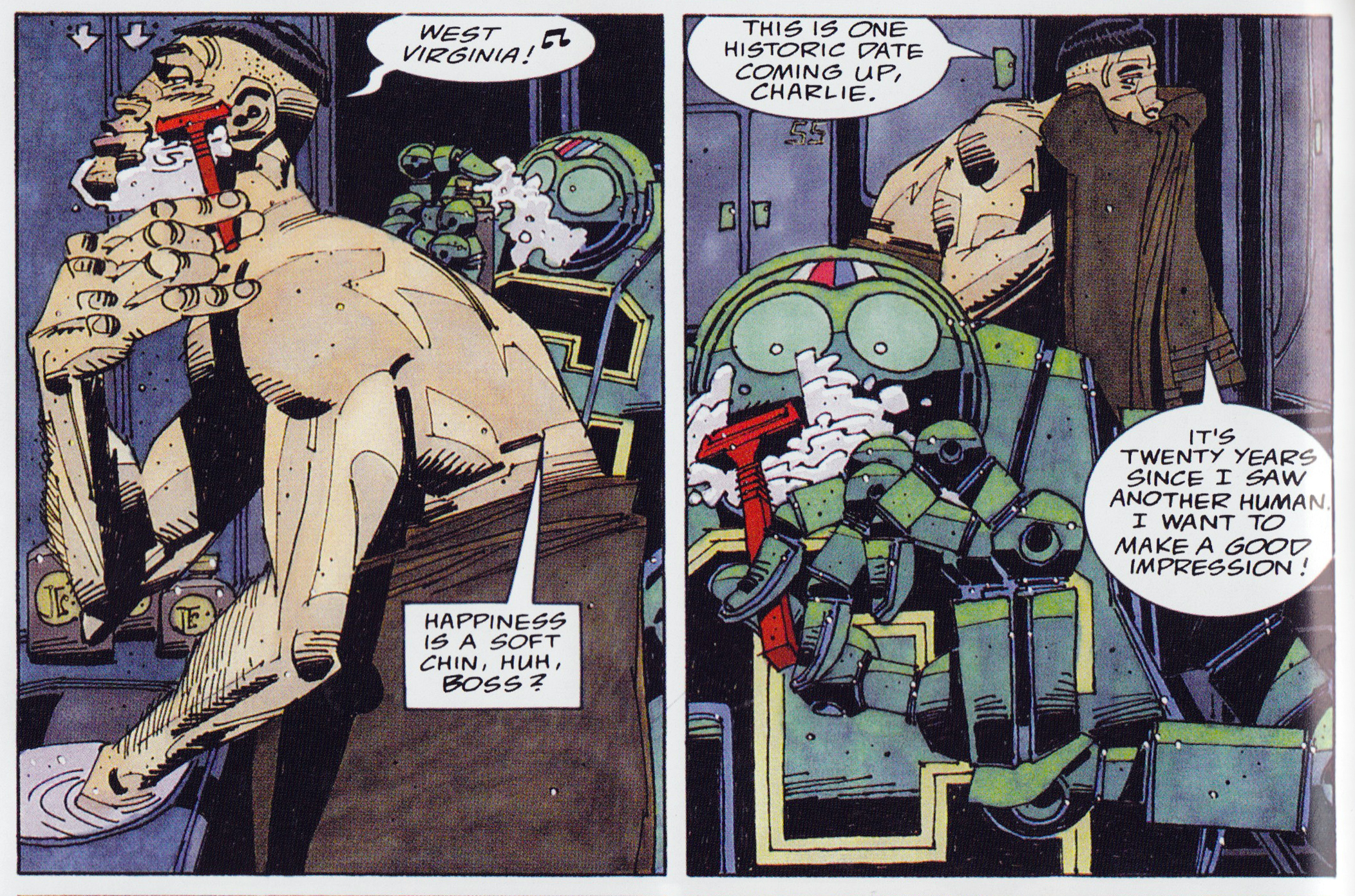 In the end, we were let down by the book. The ending drifted for Jake; they were trying to be bold but the end of the world would always be bleak. Dan was not satisfyed by the re-read and I personally had too much expectation built up. Kelvin ironically thought that the ending had been lifted by the writers, and thought it could have been even more down. He was left with the unanswered questions on his mind - what happens next?

So, As an example of stunning McMahon art this is to be pored over at length, however it is not career best work from the Wagner and Grant writing team, most likely a reflection of the fact it was their last work together.

“This is a curio, an art reference book to be waved about at people rather than a story to be revisited time and again. I love the art to bits.”
-Dan ⭐⭐⭐

“I was expecting more, something like Marshall Law. I usually like Post-Apocalyptic stuff but this feels like a romcom version of Cormac McCarthy’s The Road”
-Jake ⭐⭐⭐

“I didn’t hate it, it was pleasant enough and easy to read; the tone was better in the first half. I wanted to give it four but don’t like the art enough.”
-Kelvin ⭐⭐⭐