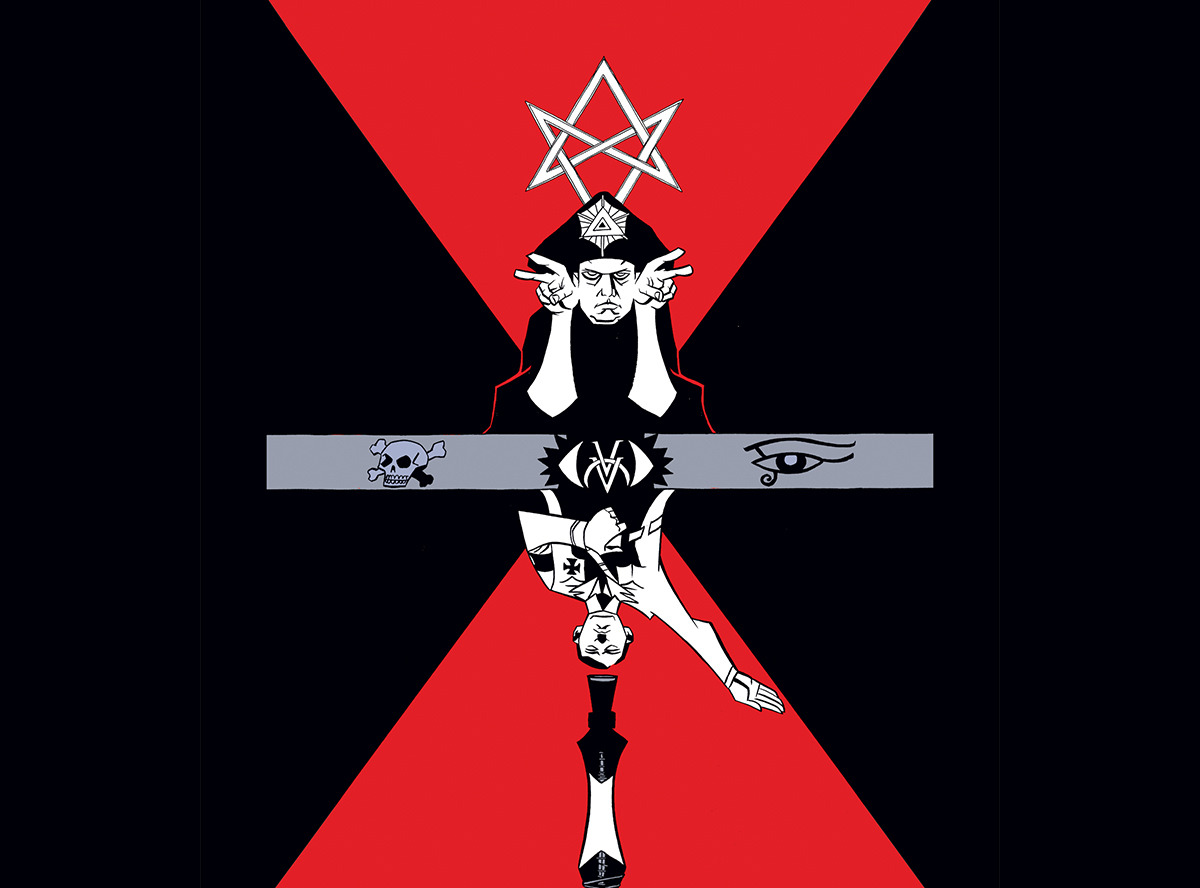 When I first heard about Aleister & Adolf via Mike Avon Oeming’s Twitter I envisaged a slam-bang battle royale between two 20th century icons of evil.

I thought we were going to get a pulpy smackdown with Hitler getting his ass kicked by the great beast. Unfortunately, what we got was something very, very different indeed…

The book itself is nicely put together, in the A5 hardback format that Dark Horse seem very fond of. It’s also my second CBC selection in a row that employs an exclusively black, white & red colour scheme (Mister X - August 2016). It wasn’t a conscious decision so let’s chalk that up to Crowley’s will manifesting itself across time and dimensions to influence my comic book club recommendations.

GET OUT OF MY HEAD CROWLEY, YOU MANKY OLD GOAT!

I do like a bit of red and black don’t I?

The big problem is that Aleister & Adolf just isn’t very good. And Hitler’s barely in it!

Oeming’s art is always pretty distinctive, his signature style giving a loose, cartoony dynamism to everything he draws. Where his style was a tight fit for the exaggerated superhero antics in Powers it can feel jarring in a book that combines terrible real-life events with magical fantasy.

Put simply, Kelv wasn’t a fan of the art. Oeming’s leaning towards to gratuitous T&A didn’t sit right with him and made it difficult for him to get in to the book.

Tom’s an Oeming fan, having first seen his work on DC’s short-lived Judge Dredd run. He found the period visuals interesting and had no problem with Oeming’s propensity for drawing bare flesh!

The visuals are interesting. Nice to see a bit of flesh!

Jake was more drawn to some very detailed backgrounds, especially the Paxton & Whitfield shopfront (“I like shopfronts”) behind which Crowley plots his magical propaganda attack on the 3rd Reich. 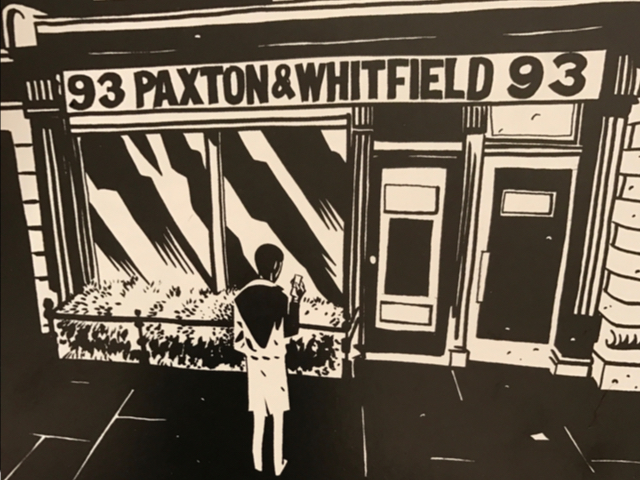 I was in two minds about the art, finding some of the line work loose and a bit rushed. I far preferred the complex panels rendered in grayscale watercolours. However, in general it all feels a bit lightweight and gratuitous. 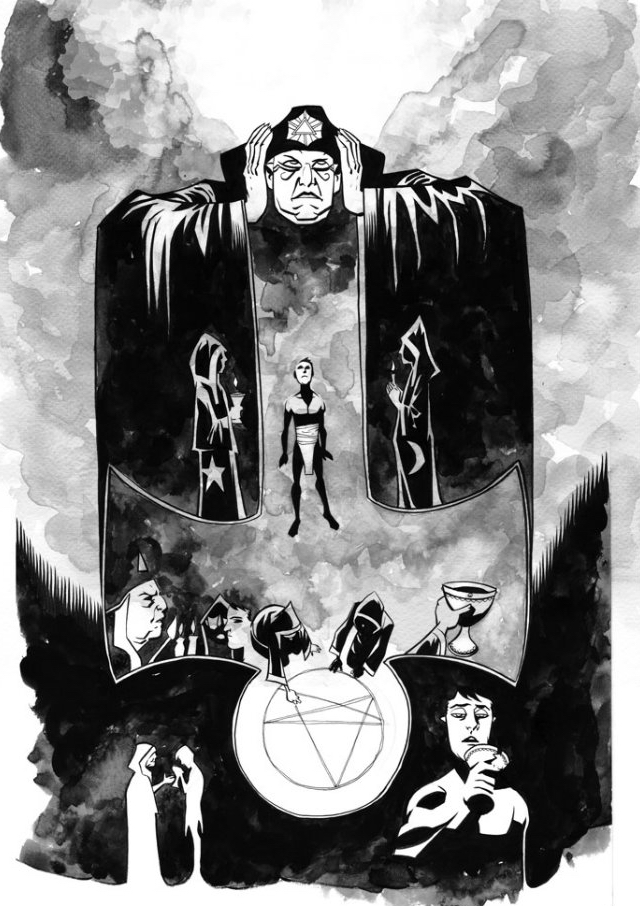 It’s all a bit… bollocks.

Whereas we all thought the story would be about Aleister Crowley and Adolf Hitler going head-to-head on the occult magick battlefield it all turned out to be far more (un)subtle than that.

The book is essentially an illustrated essay on the use of symbolism and iconography as propaganda and the idea that symbols can be infused with a power greater than their visual meaning. There’s an ‘interesting’ modern interpretation of the two-finger ‘V’ salute that ties it in with the source of Crowley’s powers but this ends up being nothing more than a throw away line. 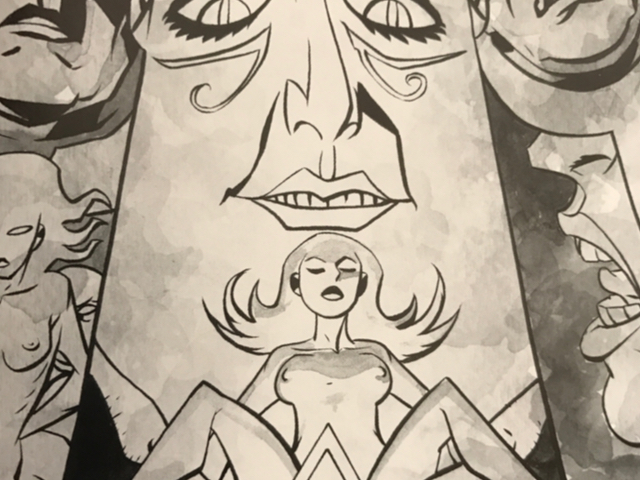 Although all this sounds fun, the story is delivered with a dryness that Jake compared to an illustrated text book. It was all so serious. In fact, for a book with so much potential to go completely insane, I’m sad to say it was really rather dull!

There’s a lack of respect for certain historical events in this book that really bothers me. Aleister & Adolf takes these events from the 2nd World War and uses them for minor narrative purposes, resulting in some very unpleasant imagery rendered in Oeming’s cartoony style.

I genuinely cannot think of an instance where using the holocaust as a narrative device is a good call. I’m just not sure that the horrors of Belsen have a place in any comic, especially not one that twists these real life events to propel a limp fiction along.

The story is not without any merit though. Douglas Rushkoff has concocted an else worlds-style story that unfortunately hangs on a not very successful twist, telegraphed early on in the book. Kelv had blown the twist by skimming through the book to the end when he got tired of the boobs. 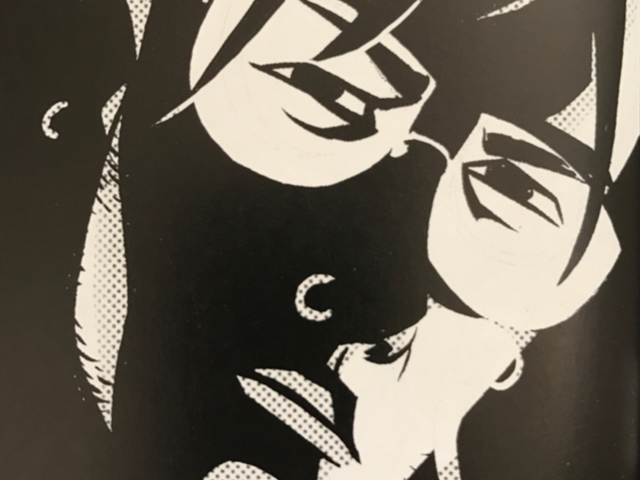 Jake was interested in the framing device - a 90s web designer who’s story bookends the main tale. he found some small sense of connection in that he had friends in the 90s who were into Crowley. There was a certain sense of nostalgia in the deification of a rather pervy old man.

We all agreed that the end was abrupt and a bit rubbish - Just like the one to this write-up. You can blame that on Crowley too. He made me do it.