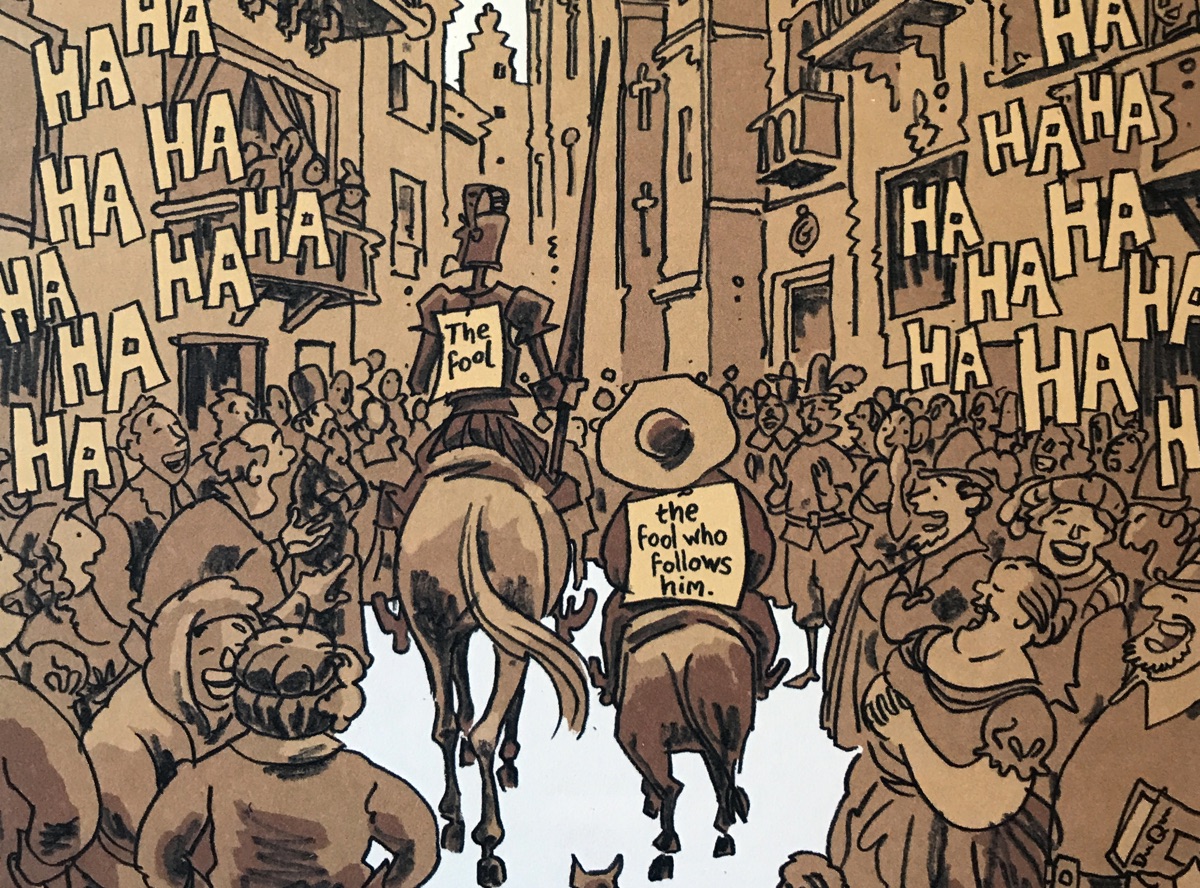 Good! Right, if you will open your set text to page one we will begin our look at the 400 year old novel “El ingenioso hidalgo don Quixote de la Mancha”, I hope everyone can read Spanish…

Sadly that is how some of us felt approaching my next pick, “The Complete Don Quixote”, as adapted by Rob Davis. I had been looking for more indie books for the club and came across Davis’ OGN The Motherless Oven. However, after adding that book to my list of possibles I found he had also adapted the classic novel by Miguel de Cervantes and so went for that. When I announced Quixote to the group Dan made a face and Jake had the sensation of being assigned homework.

I knew little about Don Quixote, my previous experience limited to stories of Terry Gilliam’s attempts to make his own adaptation, The Man Who Killed Don Quixote. In fact I had the image of the Don himself in my head but nothing else. Davis writes on his website he heard from many who had attempted to read the original work and failed, and so he wanted to be able to offer a version that could be completed (a sly jab at Gilliam for not completing his). 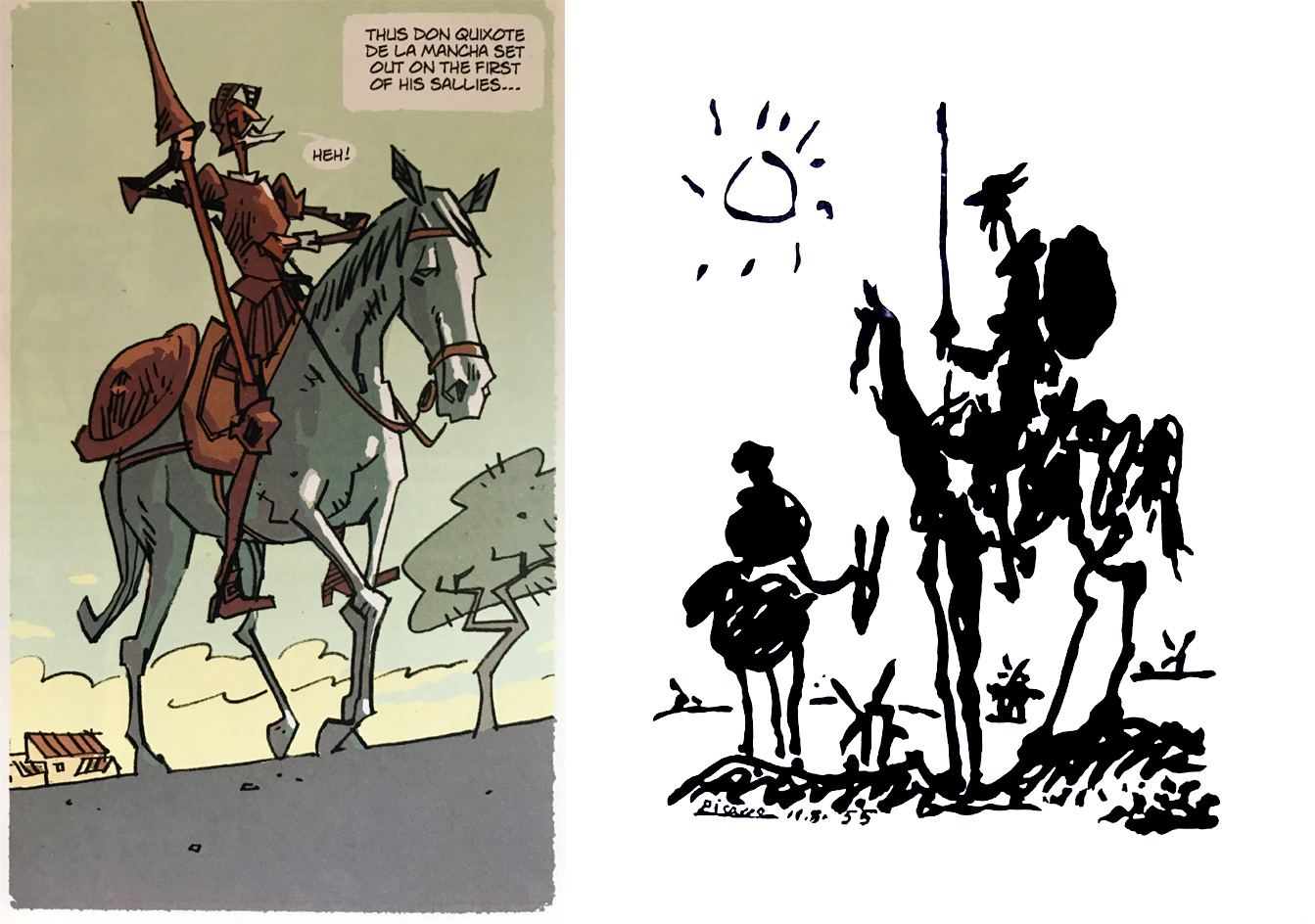 What we bought was a hefty hardback tome, a beautiful book I’m pleased to have on my shelf. It has the smell of a good book, not unlike The Encyclopaedia Of Early Earth that we reviewed quite recently, and when you flick through you’re immediately struck by the consistent quality of the art. Davis takes a few creative detours when the story does, but for the most part the illustration is the same with flat muted colours and loose line work. There are no lined borders, or outlines for the speech balloons and everything has a torn edge. His cartooning is exemplary and every drawing is full of character and feeling. We all agreed on that at least! I wondered if the lead pair began the illustrative tradition of one character fat and one thin, and also if Davis had taken his interpretation from the famous Picasso sketch. 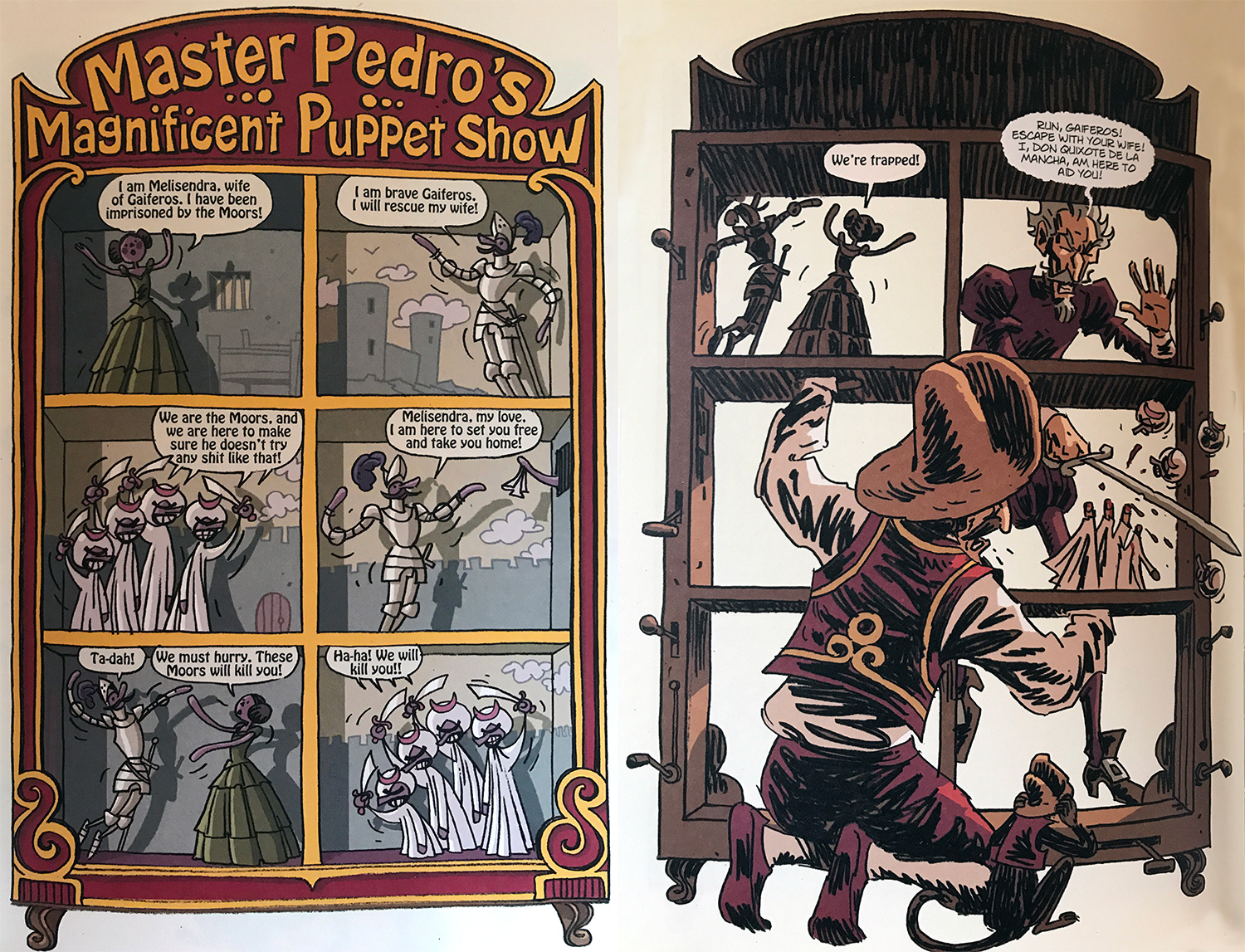 From the opening of the book with the narrator I was immediately laughing. This is a funny book! Dan said he LOL’d within the first few pages and so lifted his trepidation of reading the classic story. The handling of this one-volume edition’s transition from the first half to the second is brilliant too. In fact the book is full of inventiveness, taking asides in the story as their own mini-comic-within-a-comic and also breaking the fourth wall on numerous occasions. Jake said it was a freewheeling Gulliver’s Travels while Dan said he saw feminist thinking in the Girl In The Hills chapters and wondered how this could be reflected in a 400-year-old novel, but then men have always been a nightmare! 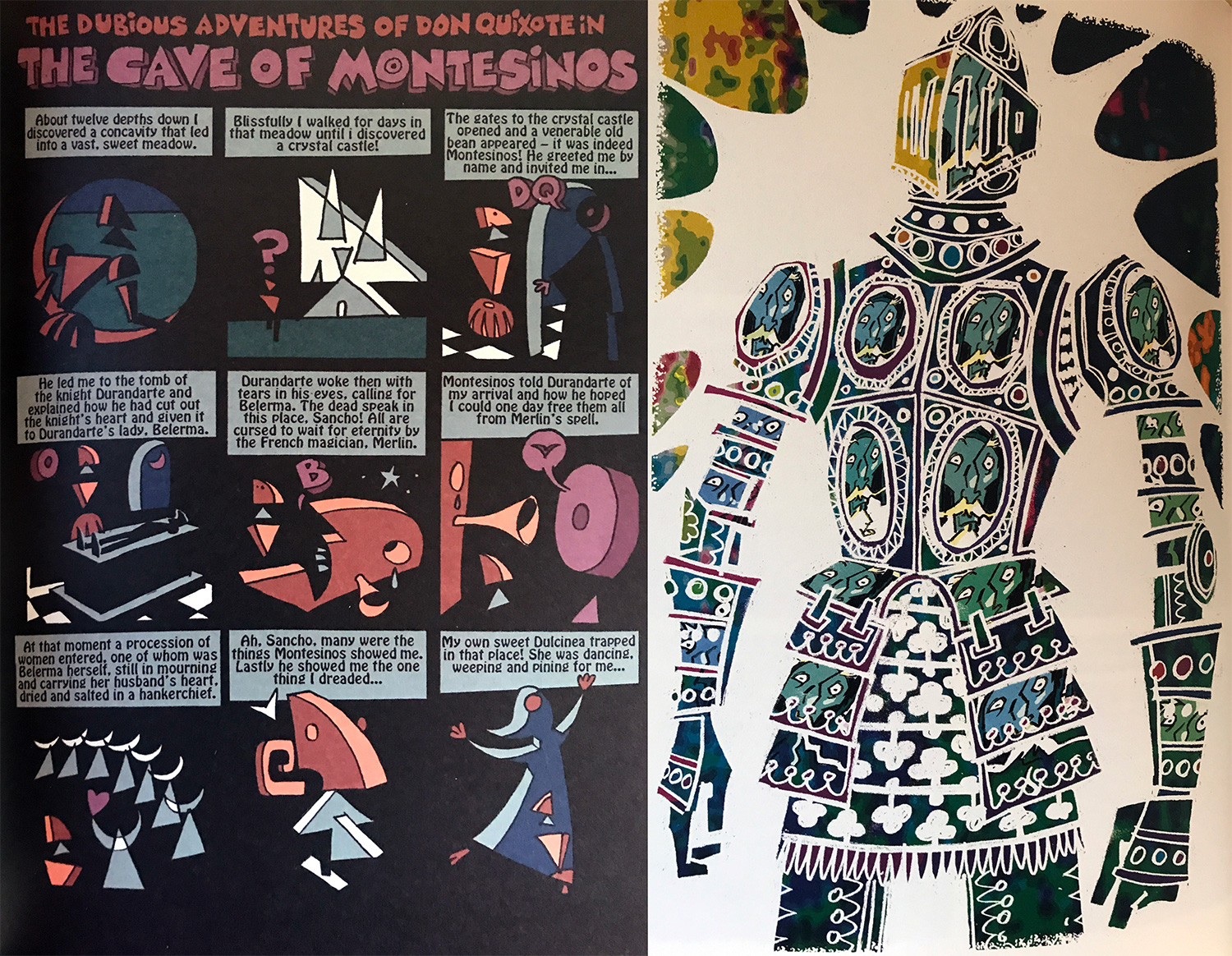 We were split overall as to the better halves of the book. If I have any criticism it is for the second half, which for me drags a little once the Duke and Duchess get their claws into our heroes. However, Jake and Kelvin preferred the narrative trickery found there to the repetitiveness of part one. Kelvin noted that the Don was having his “end of life crisis” and said with Quixote and Sancho reunited at their end it was a powerful moment, making up for his difficulty suffering the foolishness of their first adventures. Dan was upset by the way the Duke and Duchess mocked Quixote, and cross to find no comeuppance for the meddling pair. 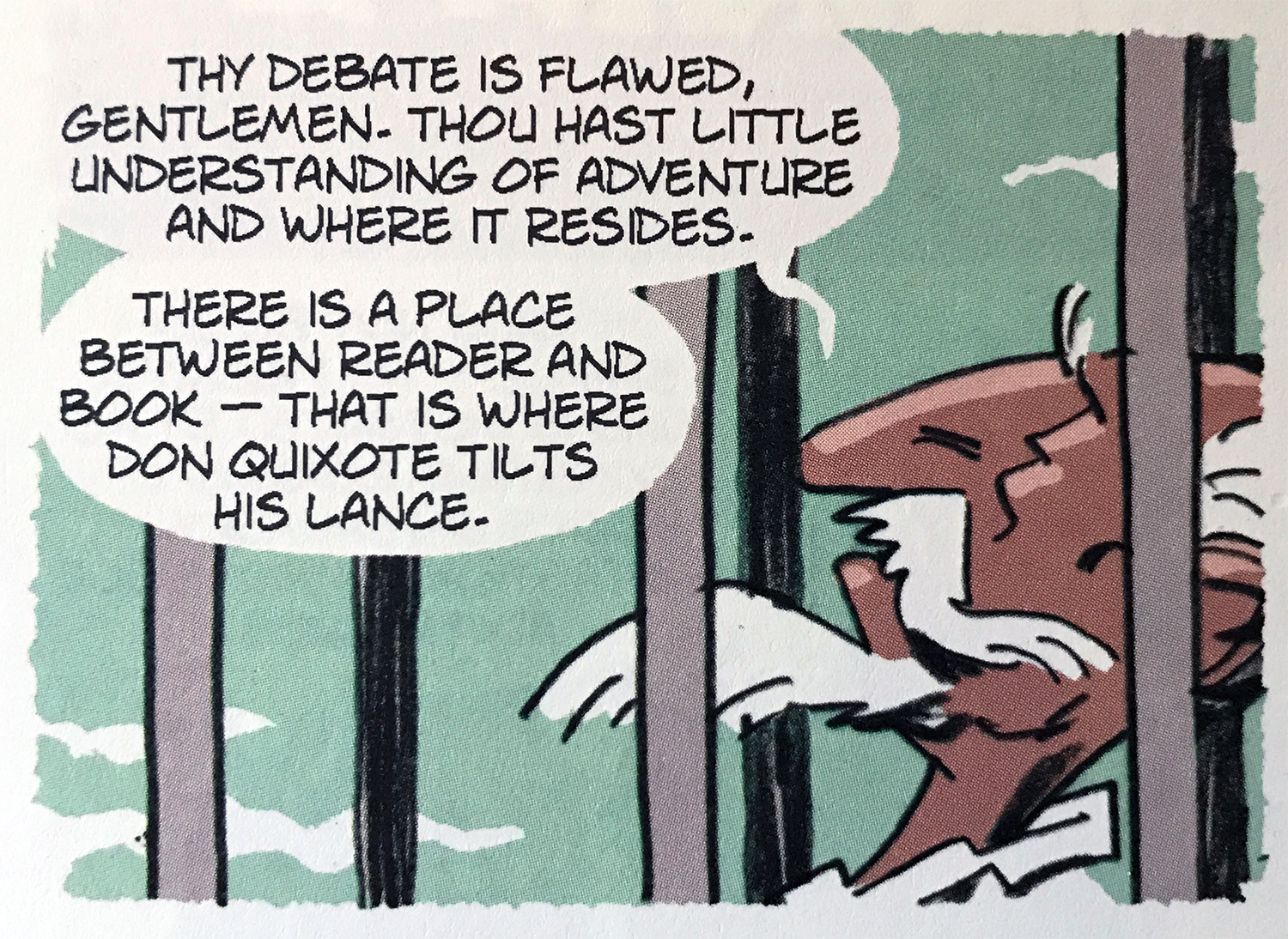 This book is certainly a contrast some of our more recent choices, and definitely a novel rather than a short read. Jake described it as inventive, with superb colours that reminded him of Lucky Luke, but as it fizzled out a bit and had the whiff of a Guardian reader’s book club gave it ⭐⭐⭐. Kelvin enjoyed it eventually, but only for less than half of it and so matched the ⭐⭐⭐. Dan was surprised that he liked it, as it was not naturally what he would choose to read and gave it ⭐⭐⭐⭐. However, I truly loved reading it and give it ⭐⭐⭐⭐! In fact I loved it so much I went on a bit of a Rob Davis binge afterwards. 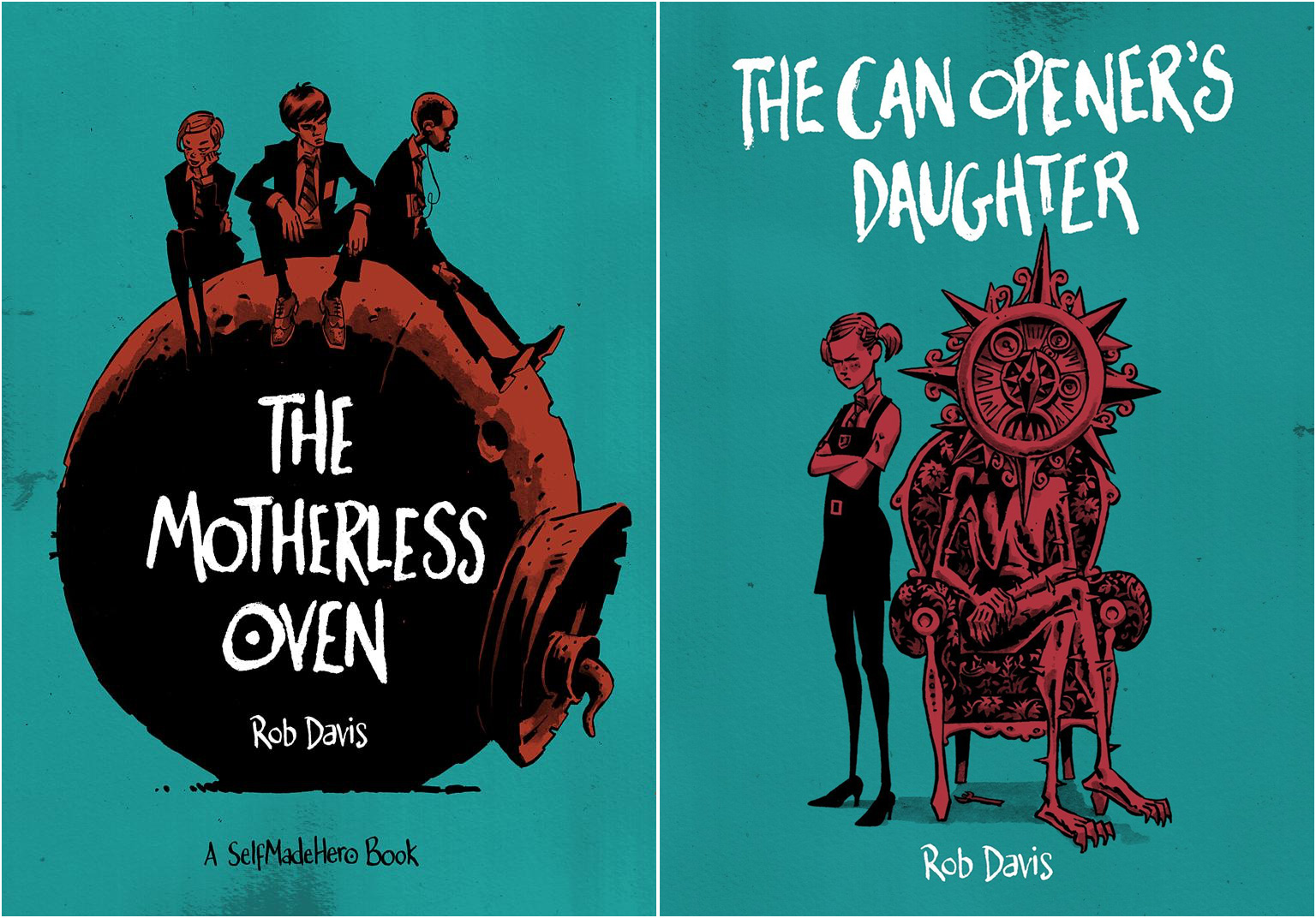 I picked up not only The Motherless Oven, but its sequel The Can-Opener’s Daughter and the 2012 British Comic Awards Book Of The Year: Nel-Son, which was edited by Davis with Woodrow Phoenix and featured a veritable whose who of the British Indie comics scene. …Oven and …Daughter are an expansion of Davis’ short strip “How I Built My Father”, which was an off the wall concept but I found it incredible how Davis took that and expanded it into the parallel reality in these two books. I spent most of the first waiting for an explanation of the ‘rules’ of the world, but most of that does not come until later, if at all. I assume there will be a third part at some point.

Rob Davis is now on my list of ‘must buy new works’ creators.