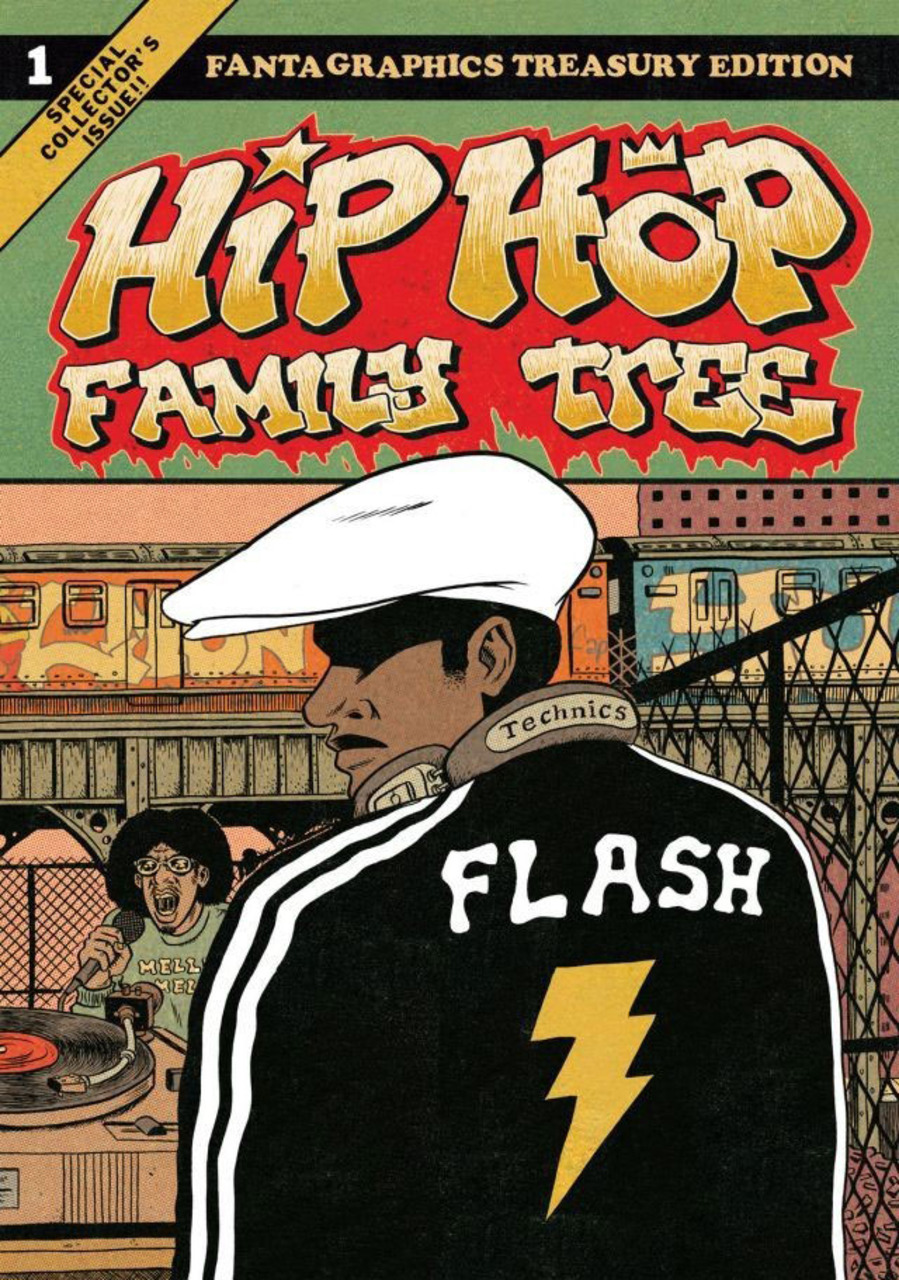 If you’re a fan of hip hop and comics, how can you not like a comic book about hip hop’s history? Eisner Award winning Ed Piskor’s Hip Hop Family Tree has been on my radar for a while. But this first volume into his cultural epic was a nervous choice for me.

As the instigator of this club I made the first pick a few meetups ago. But that book was a disaster of a choice that no one really liked (Dan hated it).

The creator of Transformers vs GI Joe was Tom Scioli and we roundly berated his art and storytelling at our first meetup. Meanwhile Ed Piskor, the creator of Hip Hop Family Tree, is a contemporary of Tom Scioli. These bros share a studio together and hang out.

That was my first reason to feel nervous. The other was the subject matter. Or rather how the subject matter may not be Dan’s cup of tea. I knew that Tom and Jake are fellow hip hop fans, but I wasn’t sure of Dan’s appreciation for the genre. And he’s a picky guy.

I really tried to not worry about it.

I was struggling. I thought I had again failed to pick an enjoyable book.

*(Yes I know it should be “collaborate and listen”)

This book needs a soundtrack to listen to while reading.

I ambled through for 3 weeks and got halfway only 2 nights before the meetup. On the final read I had a revelation. The book was about a culture predicated on music. I needed to feel the music in order to feel for this book.

I hit Google and found this YouTube playlist featuring an interview with Ed Piskor.

I could feel Piskor’s passion as he spoke of his motivations for this book. But more importantly I could feel the beats.

Up until then I wasn’t connecting with the book. It felt like an endless cycle of introducing a new MC or DJ, new party jam, new rekkid, repeat. Sometimes I’d vaguely recognise some of the characters but this was way before my time. I needed to get into the 90s which was when my love for hip hop began. Given that Piskor is spending a lot of time on the 80s though, I’ll be waiting for quite a while.

Step into my world

Events in history can be uninteresting if you don’t realise their significance. I had an extraordinary history lesson as I read Piskor’s depiction of how the video for Blondie’s Rapture was produced. 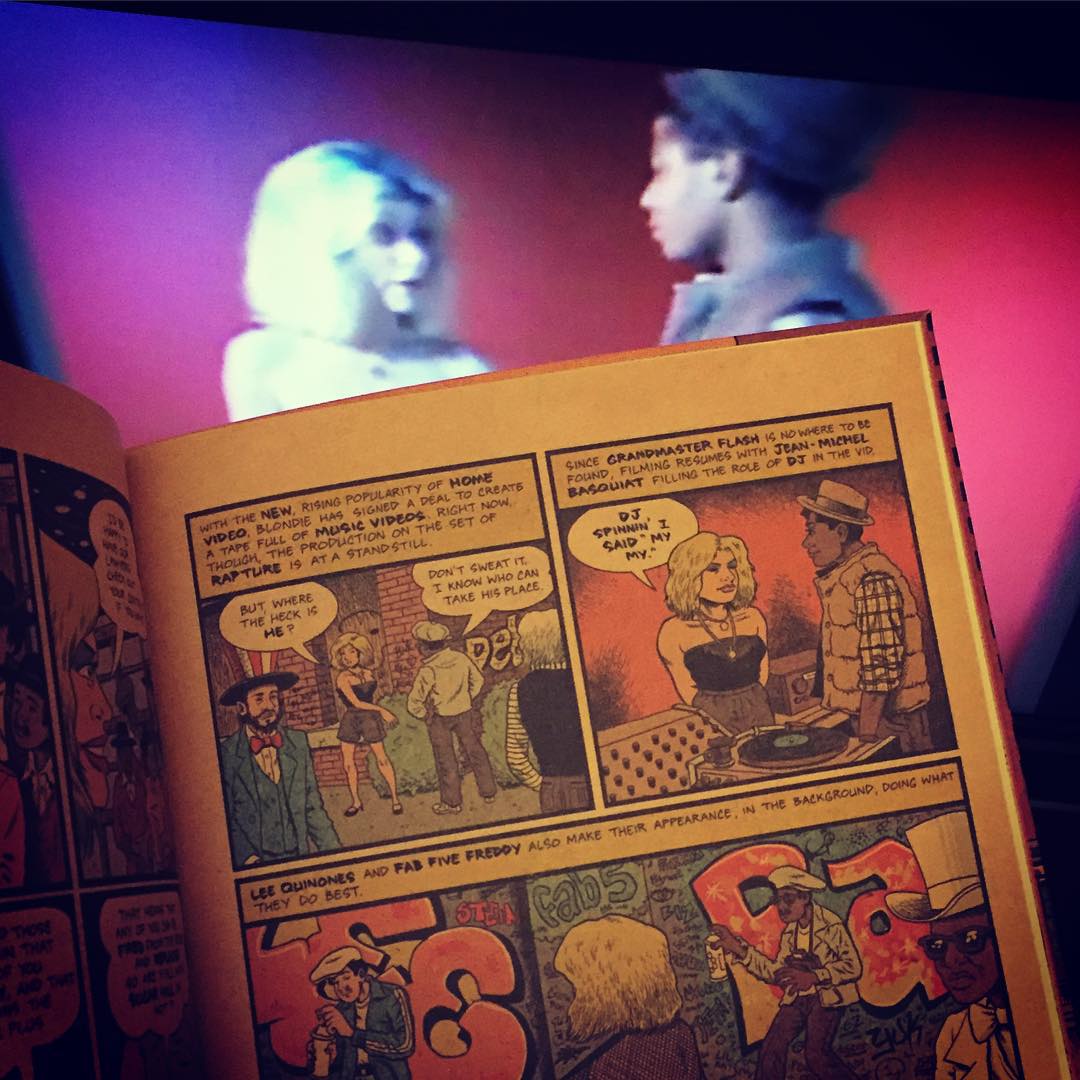 At that same moment the video came on the telly.

Immersing myself in the music as I was reading saved the book for me. I accept that as Piskor began this series he was finding his feet on it. The book is far better in the second half than the first.

Turns out Dan did the same thing. He too had struggled (aw no!) and had to turn to the music to feel more for it too. But he still struggled. For him the book was hard, monotonous and rigid. The panels were too fixed in the square sequences and it’s telling that it was originally a serial collected into a book. The story just goes on and on and he didn’t see these as characters, more as people for whom life just happens.

Reading this was like cramming for a GCSE on hip hop. It’s like a textbook with some pencilled in swear words. It lacks joy: I just got facts. Exhaustive and exhausting.

He felt that when there were big events they were too constrained by the tiny square panels, guessing perhaps it’s because of the real estate Piskor is given on BoingBoing. It would’ve benefited from a few more splash pages and half page panels. Frustrated Dan describes hip hop as a vibrant political, social and cultural event and it doesn’t convey that impact enough for him.

The structure also doesn’t suit the collected editions compared to other strip compendiums, where each entry has a defined beginning and end. Hip Hop Family Tree has a non-deliniated timeline that has no sense of time. It’s one long thing.

Dan admitted he lacked the passion for the subject matter, but also that he’s not a fan of real life stuff. He wants explosions, spaceships and 3-boobed alien women. He craves unreality as we all have enough of reality. This book isn’t it (sorry Dan!).

Dan was also the only one of us to read the digital version and was astonished to feel a little bit jealous when he saw the lovely hard copies the rest of us turned up with. We all loved the texture and smell of the pages.

Tom read the digital version too. He alerted me to the Fantagraphics sale on ComiXology (£6!) and I felt that if people wanted to give it a go then the sale was a good opportunity (lucky for Dan). But then Tom bought the real life book as well. Then he bought Volume 2…!

The book was also hard work for Tom but he took the appropriate step of reading it a bit at a time. 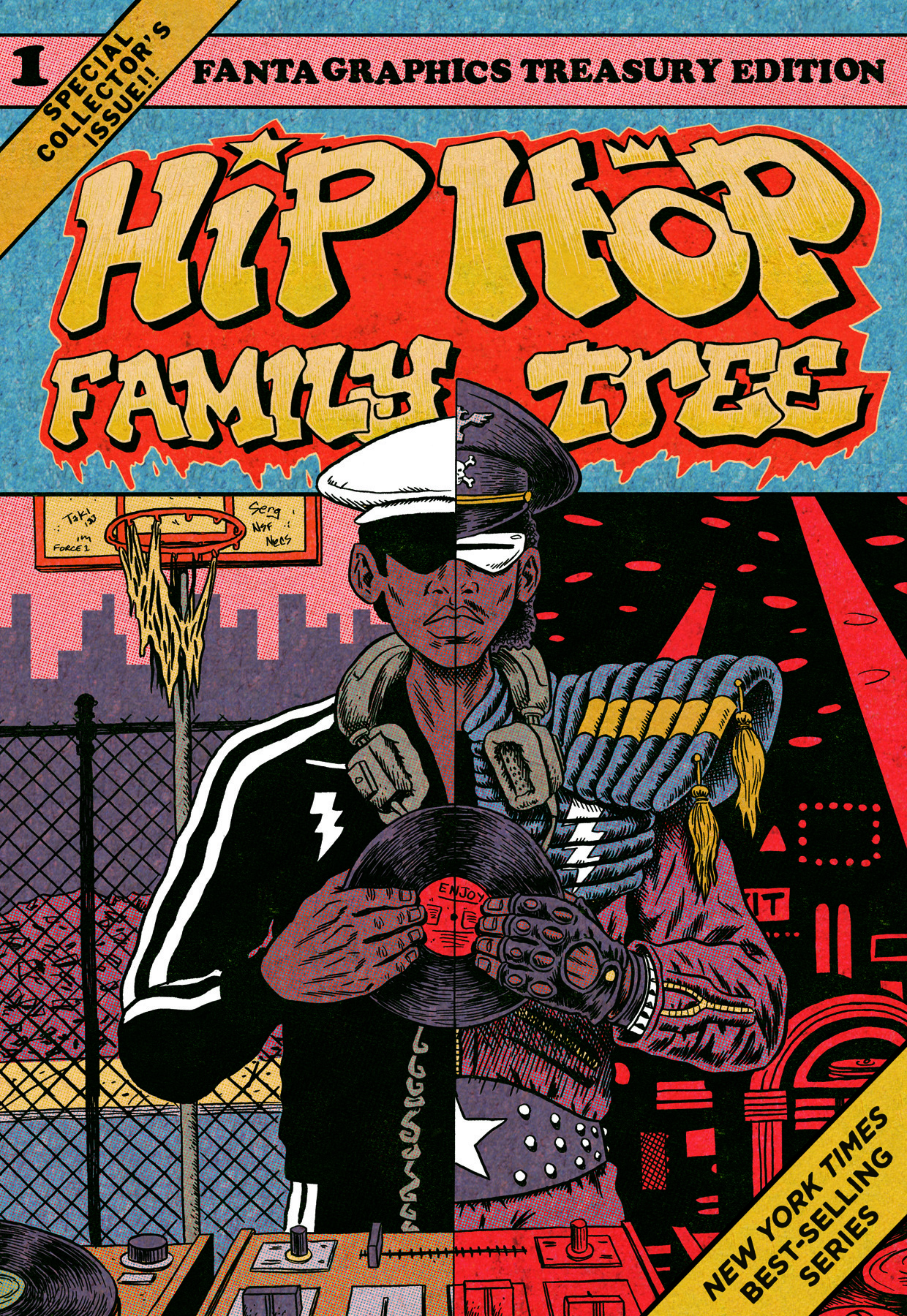 Tom didn’t have more to add to what we’d already said but had a lovely anecdote of his brother once breakdancing. Then his grandad decided to breakdance too!

He also had a different edition of the book to us featuring some lovely spot varnishing.

I liked it so much I bought the next volume straight away. I had to have more of it.

Jake had researched hip hop for a documentary on music history last year so knew the story already. Jake was really impressed by Piskor’s detail. Hip Hop Family Tree excels over the biographies that he had already poured over. It caught in detail the graphics of a graphical culture.

He also liked the characterisation. Piskor sees these luminaries as superheroes but you also get a real sense of them. He sensed that Grandmaster Flash was slightly bitter and nasty. It was also amusing to hear that Russel Simmonds doesn’t speak with a lisp or have a lazy eye at all from his own research!

He forgave the flaws that we’d already touched on because he was nerding out so much. He did find it hard to read and could see that as a weekly serial it’s probably better.

I loved it from page one right to the end. A stirling job. A man embarking on an insane life of detail that can only get better. I’m jealous of Tom’s Volume 2.

This book has received the biggest variety of scores we’ve awarded a book so far. I’m glad that most of us enjoyed it and I am looking forward to reading more of the series as it was clear that the story was improving. Tom had indicated that volume 2 was a far better book. That’s good news given that it won Piskor an Eisner.