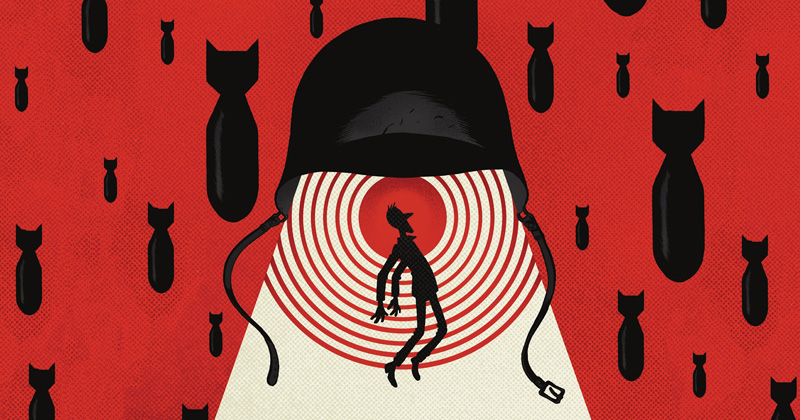 Adaptations can have mixed results. Some stories are even deemed unfilmable, or in this case unillustratable. When in bookshop Mr B’s Emporium earlier this year I mentioned Ryan North and Albert Monteys’ graphic novel they were surprised it had been attempted! Of our group, Paul and Jake had already read the source novel but the rest of us had not. I felt the need to rectify this when I had finished the GN and I honestly couldn’t see what they were all worrying about!

Yes, Slaughterhouse 5 is a challenging story: it jumps about through the lead’s life; it begins with the author explaining just what this book you’re holding in your hands is; it features aliens shaped like a hand stuck on top of a plunger; and most importantly, it deals with the horrors of war. But this graphic novel could not have handled all that any more straightforwardly. And I don’t mean to belittle it with that comment, nor to gloss over the pages where Monteys changes up his style to ape a different aesthetic. It is just a perfectly executed piece of graphic fiction.

It helps for me that the European style is just up my ally. Monteys’ line is slick with a cel shaded colour style, his cast have exaggerated features and the panel style is often a very regimented grid. You happily read the captions and the speech balloons, all the time easily following the action as it plays out.

But it’s the action that readers have been furrowing their brows at for the last fifty years, and so for this book to so gently guide the reader through the life of Billy Pilgrim is to be applauded. It also helps that non-linear storytelling and even the concept that all time exists as one single moment has been fed into popular fiction during that time. I’m thinking specifically of the character of Doctor Manhattan from Moore & Gibbon’s Watchmen, for Vonnegut’s Tralfamadorians experience time in exactly the same way the blue superhero does. 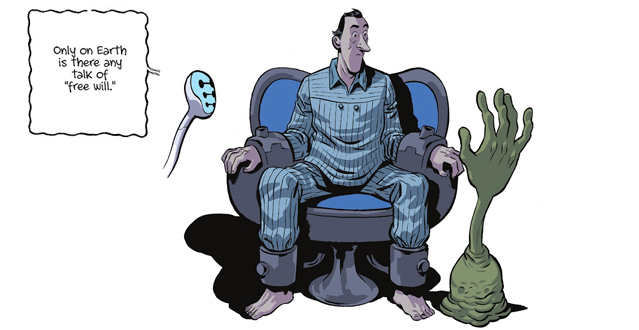 That is not the only heady topic to be found in the book and it is a set text for some students. Even a philosophical discussion. Vonnegut’s writing is often anti-American and it is spelled out at the beginning as his anti-war story. In the book, when someone dies the line is always So it goes, and no more devastating a instance of that is the bombing of Dresden. It is no spoiler to bring this up here as it is partly the theses for the piece. Kurt was there, and so places his fictional character there too. Through Billy, he is able to externalise his experiences. 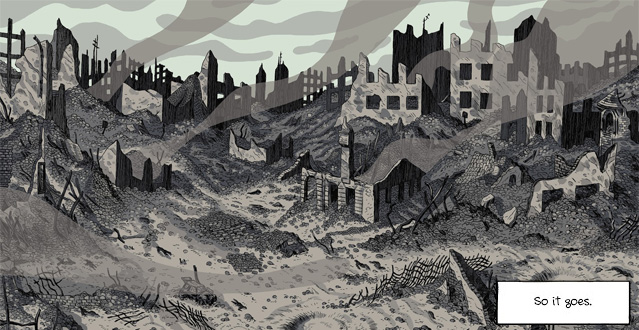 Vonnegut then gifts Billy the ability to move through time like his aliens do. If things are too awful in the present, he can instead be somewhere else. For someone who has experienced such horrific trauma, it’s possible that those events would feel like they were happening constantly. If that was the case, imagine being able to relive the better times constantly instead. 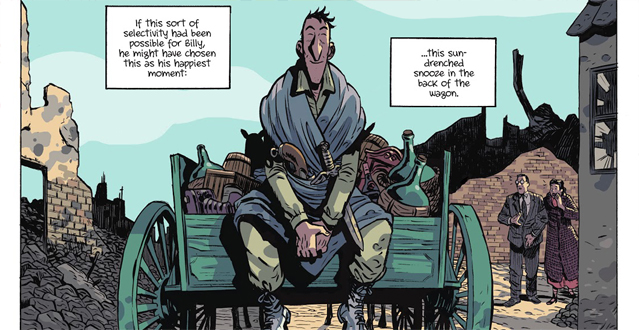 Now, why in summing up do I feel I have lost the spark of when speaking about the work the creative team have done adapting the story? Partly it is the homework aspect. Like when I picked Don Quixote some time ago, the sheer weight of this American Classic limits my ability to be enthused. I wouldn’t recommend it to anyone without a passing knowledge of the source book, like me not even knowing what the five referred to (it’s the fifth slaughterhouse, not, for instance, five people in a slaughterhouse).

But for someone looking for a new interpretation of the work I don’t think it could have been done better, and I highly encourage people to check out other works by Ryan North like Squirrel Girl (with Erica Henderson) and also Albert Monteys’ Universe, which is itself quite mind-bending too.

This review is finished, so it goes.

It was an enjoyable graphic novel but I can’t view it as a standalone work.
-Paul ⭐⭐⭐⭐

Comics is the perfect medium for this story and Ryan North had the CV to do it well.
-Jake ⭐⭐⭐⭐

It’s too all over the place for me. I like non-lineaer but the weird whimsy was too much.
-Dan ⭐⭐⭐

I don’t love or hate it but it felt like a worthy read.
-Kelvin ⭐⭐⭐